Biden’s ambassador to Israel appeared at a pro-BDS group’s webinar co-hosted by its CEO, who had described Israel as an “oppressive regime”, and told its audience that the real problem with the Palestinian Authority funding terrorism is that “it gives the ‘haters’ an excuse not to support the PA based on the argument that it is ‘paying for people who killed Jews.’” 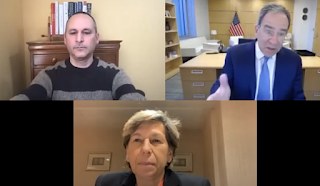 He also told the anti-Israel group which had cheered the Ben & Jerry’s boycott that, “your agenda is where my heart is.”

At this rate, Thomas Nides will be hugging and kissing Hamas leaders by the end of the year.

Expectations for Nides were already pretty low when the Biden administration announced that it had picked Obama’s former deputy secretary of state as its ambassador to Israel.

Hillary Clinton was going to make Nides her chief of staff, but once Hillary in the White House became as likely as peace with Hamas and the PLO, Nides had to settle for being Biden’s bully in Jerusalem while his wife who is a VP at CNN stays on in Washington D.C.

Nides’ main qualification for the job had been yelling “You don’t want to f***ing defund UNESCO” at a former Israeli ambassador. He had also vocally opposed efforts to defund UNRWA and stop subsidizing the terror refugee industry. He has also served on the board of the International Rescue Committee which has repeatedly attacked Israel.

J Street, the anti-Israel pressure group, welcomed Nides’ nomination and announced that it “looked forward to working” with him. Other anti-Israel groups including the Israel Policy Forum and Americans for Peace Now echoed the sentiments.

It didn’t take long for Nides to justify their faith in his hostility to the Jewish State.

Early on, Nides announced that he wanted to open an occupation consulate to the terrorists in Jerusalem, over the opposition of the Israeli government, and that he would not visit those parts of Israel wrongly described as “settlements” because they are claimed by Islamic terrorists.

“I absolutely will not,” he replied.

That was an even more extreme position than the one adopted by Obama’s ambassador, Dan Shapiro, who had privately visited homes in those areas where many Americans live.

Nides however did meet with Mansour Abbas, the head of the Muslim Brotherhood’s United Arab List, which played a key role in removing Netanyahu from office and replacing him with a leftist coalition government.

“When it comes to Israel, I have no ideology,” Nides had initially claimed. Then on a webinar by the anti-Israel APN group, he let his freak flag fly and admitted what everyone already knew.

“I’m center-left,” he joked. “I’m left generally, but I put in the ‘center’ just to make myself feel better.”

It got worse from there.

“You have a clear agenda. I think your agenda is where my heart is,” Nides told Americans for Peace Now.

What is APN’s agenda? The anti-Israel group opposes Jews living in Jerusalem, opposes anti-BDS legislation, and opposes Jews defending themselves against Islamic terrorism.

He claimed that the Jewish outrage over Amnesty International libeling Israel as an apartheid state was “manufactured” and that the real issue is that Israel maintains an “endemic, oppressive regime, in which the… human rights of millions of Palestinians are ruthlessly violated.”

That “clear agenda” is where the rotten heart of Biden’s ambassador to Israel lies.

The APN webinar was co-hosted by Susskind and teachers’ union boss Randi Weingarten. Weingarten, an APN board member, had previously ranted that “American Jews are now part of the ownership class… who now want to take that ladder of opportunity away from those who do not have it” when asked by a Jewish journalist if unions like hers had too much power.

Weingarten’s lover, Sharon Kleinbaum, had faced a member revolt over herextreme anti-Israel views which included reading the names of dead Hamas terrorists alongside Israeli casualties from the pulpit, and providing space to Queers Against Israeli Apartheid.

Biden has since appointed Kleinbaum to the Commission on International Religious Freedom despite her support for Cuomo’s discrimination against Orthodox Jews during the pandemic.

So this gathering of antisemites was old home week for a member of the Biden administration.

Nides told Susskind and Weingarten that he and Biden wanted to divideJerusalem and that “my job is to knock down things that make that possibility impossible.”

The leading thing to knock down would be the Jewish State.

Nides ranted that his priority was fighting to prevent Jews from living in those parts of Jerusalem that had been captured by invading Muslim armies in 1948 and were liberated from their occupiers in 1967 during the Six Day War.

“We can’t have the Israelis doing settlement growth, both in East Jerusalem or the West Bank,” Nides whined. He failed to explain how Jews living in the city of King David and King Solomon, of Jewish kings and prophets, could be occupying “settlements”.

“I can’t stop everything, just so we’re clear, I have to pick my battles,” Nides told his anti-Israel audience at the APN webinar. “E-1 was a disaster, I went full bore on E-1.”

E-1 would begin at Mount of Olives in Jerusalem. Perhaps Nides would also like to evict the Jews who have been buried there for thousands of years for also being “settlers”.

Nides apologized to his Americans for Peace Now audience for not being able to stop every Jew from living in Jerusalem. “I’d be lying to you if every single house… in east Jerusalem or the West Bank I could stop… I can’t stop everything, just so we are clear.”

“I’m a bit of a nag on this, including the idea of settlement growth – which infuriates me,” Nides fumed, as if he were the proconsul of an occupying regime tasked with policing the natives rather than a diplomatic envoy dispatched by an ally to cooperate on regional security.

A few years ago, Congress passed the Taylor Force Act. The law was named after Taylor Force: an American military veteran murdered in Tel Aviv by an Islamic terrorists. The Palestinian Authority, the PLO government in Ramallah, treated Force’s killer as one of its fighters and put his family on a generous pension. This ‘Pay to Slay’ program pays out millions to imprisoned Islamic terrorists or their families as a reward for killing Jews. The Taylor Force Act cut off a lot of American subsidies to the PLO until such a time as it stopped funding terrorism.

Nides used the PLO term for ‘Pay to Slay’, describing them as “martyr payments”.

Islamic terrorists describe their crimes as “martyrdom”, an American ambassador should use the term “terrorism” instead of talking like a Jihadist.

Biden’s ambassador further claimed that the issue with, “these martyr payments” is that they ”have caused an enormous amount of problems’ because it gives the ‘haters’ an excuse not to support the PA based on the argument that it is ‘paying for people who killed Jews.’”

Rather than vocally condemn the PLO for subsidizing the murder of Americans and Jews, Nides only appeared to be concerned that the terror payments were an “excuse” for Jewish “haters” to cut off funding to the terrorists.

It’s no wonder that he recently tweeted, “Pleased to see lots for Palestinians in the budget just signed by @POTUS Biden: $144 million increase (now $219 million) for Economic Support Funds, $40 million for security forces training in the WBank, and $50 million for 2nd year of the Nita Lowey MEPPA Fund.”

The Zionist Organization of America (ZOA) has condemned Nides’ webinar with APN stating that a “U.S. official should not be legitimizing the pro-BDS group Peace Now.”

Unfortunately Nides is characteristic of the anti-Israel Biden administration.

Nides knew exactly whom he was talking to and who his real audience at this event was.

Much as when Stuart Eizenstat, contacted Jake Sullivan, currently Biden’s National Security Advisor but then Hillary’s foreign policy advisor, using Nides as his referral, and telling the Clinton campaign, “I am respected by the J Street group” and vouching that he had convinced the Israeli ambassador “to end the Israeli Embassy boycott of J Street”.

The anti-Israel establishment controls the Democrats. Any ambassador to Israel is going to be vetted by them. Nides wasn’t picked by Biden, he was picked by J Street, APN, and other anti-Israel hate groups. His job isn’t to build relations with Israel, but with its haters.

Greenfield: The Islamic State is Running Out of Caliphs