We live in the golden age of the junkie. Not even in the darkest days of the counterculture were addicts able to swarm major cities and sit on the street getting high while knowing that all of their needs and wants would be taken care of. Billions are spent on “homeless services” for crackheads, meth abusers, and heroin addicts whose plight is blamed on the cost of housing. 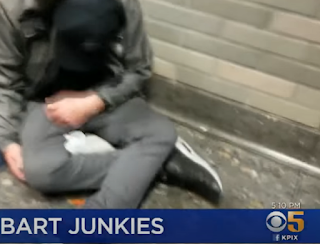 Not on a political system that decided to decriminalize drug dealing, drug use, public vagrancy, shoplifting, and then wonders why the streets are filled with tent encampments and overdoses.

Public health has long since been redefined as giving addicts everything they could possibly need to go on smoking, snorting, or shooting up as they will until they overdose and die. The same dysfunctional public health system that insists on masking 2-year-olds also claims that the interests of public health are served by handing out drug paraphernalia to crackheads.

When the Free Beacon’s story about the Biden administration signing off on “safe smoking kits” went viral, Biden’s people and the media rushed to deny it and shout it down, but the story reveals nothing unusual. Public health is now routinely used to enable the drug lifestyle.

Free crack pipes have been handed out before. The Biden administration claims that the “safe smoking kits”, as if there were a safe way to smoke crack, will not include actual crack pipes.

Does it really matter whether the crack smoking kit contains an actual crack pipe or just all the other essentials for smoking crack? The public may be temporarily outraged over handing out crack pipes, but how is that any different than handing out free needles to heroin addicts?

Needle exchange programs, which were controversial a decade ago, are ubiquitous. There’s hardly any major city that doesn’t offer needles. The Biden administration, now busy acting as if it would never hand out free crack pipes, announced a push to get states to adopt Syringe Services Programs. That’s another euphemism for handing out free needles to heroin addicts.

Is there some reason why crackheads shouldn’t get freebies but heroin addicts should?

The Biden administration announced its free heroin needles advocacy through the Office of National Drug Control Policy. Once a signature element of President Reagan’s War on Drugs, ONDCP, like everything conservative that leftists touched, from the military to the FBI, serves the opposite of its original purpose, no longer fighting drugs, but enabling it.

There are still the old “Drug-Free Community” grants that now mean the exact opposite.

Not only isn’t the old drug czar office fighting drugs, but it funded the drafting of a bill to give out heroin needles. Faced with a sharp increase in overdose deaths, Rahul Gupta, the Biden admin’s choice to head the Office of National Drug Control Policy, which is no longer in the business of controlling drugs, proposed more free needles and offering fentanyl test strips to allow addicts to test if their drug of choice has been cut with Communist China’s drug of choice.

But at this rate, ONDCP will be handing out information on how to safely use fentanyl. That’s no exaggeration since the proponents of “harm reduction” believe in just that.

The CDC, which claims that being around an unmasked child can be lethal, is overseeing the Harm Reduction Technical Assistance Program to “monitor” free needle giveaways nationwide.

Masking 2-year-olds and handing out needles to addicts is the new public health.

The CDC promotes the National Harm Reduction Coalition’s claim that “racialized drug policies” are the real problem. Harm Reduction is a euphemism for making drug use safer rather than ending it. And that’s exactly what the NHRC, which acts as a “provider” for the CDC, argues.

The National Harm Reduction Coalition’s site claims that, “Safer drug use means using safe supplies” and, “No one knows what’s best for you better than you. Whatever drugs you use, we want you to be safe and healthy”. It has a fact sheet on fentanyl use advertised as “by and from people who use drugs” that is funded by the San Francisco Department of Public Health.

“You can use any drug safely, including fentanyl and its analogues, as long as you have the right resources,” the fact sheet tells users.

It repeatedly blames drug overdoses on the “criminalization of people who use drugs”.

The fact sheet from the Drug Overdose Prevention and Education (DOPE) Project mentions that it’s funded by the San Francisco Department of Public Health and that it’s been featured in “CDC reports”. Perhaps the CDC can address the claim by its “technical assistance provider”.

But you can see why the CDC is comfortable in its collaboration with NHRC because the organization issued COVID guidance for handing out “latex gloves, safe masks, and hand sanitizer” to junkies alongside “harm reduction supplies for safer smoking and snorting”.

Smoking crack won’t kill you, but a lack of hand sanitizer just might.

DOPE traces its history back to San Francisco’s Heroin Committee and “innovative” programs like “free, 20-minute phone cards, which were distributed by programs serving injection drug users (IDUs), with pre-recorded messages encouraging users to ‘fix with a friend.'”

And that again is how we got here.

Never mind that there’s no “safe” way to use crack, heroin or fentanyl.

Harm reduction is obsessed with preventing overdoses, but the biochemistry of drug use makes them all but inevitable in addicts over time. And the risk of an overdose is not the only thing wrong with drug use. The streets of San Francisco and every major city are evidence of that.

Our “homeless” crisis is the result of a deliberate policy reversing the war on drugs. It’s no coincidence that the crisis is at its worst in the California cities that pioneered “harm reduction”.

Harm reduction is a wonderful euphemism. It doesn’t stop the harm, it merely makes it manageable. The successful crack, heroin or fentanyl user “manages” his addiction. He reduces the inherent harm to slowly destroying his mind and body, to lying on the street, mugging random pedestrians, and spreading disease, all the while avoiding a final fatal overdose.

There’s nothing humane or kind about this. Harm reduction enables human misery on a scale we haven’t seen in generations. And every time the overdose numbers rise and more homeless crowd the streets, the same social welfare crowd that caused this crisis offers more of the same.

Greenfield: Confused Old Man Yells at Nation for an Hour