Much as with quantum theory, the famous physicist was wrong. 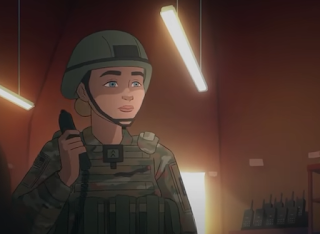 Whatever world war we’re currently on is going to be fought by disinviting Russian cats from the International Cat Federation and removing digital images of Russian soccer players from video games, even as Putin’s tanks and infantry keep advancing across Ukraine.

Putin might threaten to go nuclear, but the Lego company already pushed the red button by halting shipments of bricks to Russia. If that doesn’t stop Putin, I don’t know what will.

When virtue signaling goes up against tanks, especially by people thousands of miles away who, unlike a nameless Chinese protester, would never have the guts to actually get in their way, then the tanks win. Virtue signaling, like most of wokeness, is all about feelings, while tanks are mechanical beasts that project force in the real world. Twitter is not the real world.

Wars are a serious business and woke societies are profoundly unserious. Wokeness, like Putin’s regime or Xi’s China, punishes political dissent, but it is convinced that social shaming is the ultimate power in the universe because of how powerful it makes the shamers feel.

Megalomaniacs are obsessed with wielding power over others and in our democratically crowdsourced megalomania anyone can live the dream by canceling someone else. Entire internet subcultures are based around collecting damaging information about targets and then unleashing it in one strategic reputational assault that leaves the victim broken and jobless.

It’s why they do it.

The issue, whether it’s the sacred right of men to shower with teenage girls, thugs breaking windows because a drug dealer croaked, or a war someplace they never heard of, isn’t the issue. The real issue is the rush that comes from wielding power over other people’s lives.

Real power isn’t canceling someone on Twitter, it’s sending six figures worth of troops into someone else’s country. Just ask Putin or Xi who are a whole lot better at cancel culture.

The internet has given horrible people the illusion of power, but power is still real power.

Biden bet everything on stopping the Russian invasion by pitting cancel culture against a war machine. And while the sanctions will no doubt hurt Russia’s economy, much like the economic pain leveled against Iraq before the war or North Korea, the regime usually finds ways to profit.

Some oligarchs may lose their yachts, but gain a country. Only Kerry wouldn’t take that trade.

The Biden administration’s policy takes its cues not just from traditional sanctions, but from the virtue signaling of woke culture. The resulting collectivism makes America and Europe look like Russia without achieving anything more than the self-righteous solidarity of the smugly virtuous.

Russia, unlike that guy in the coffee shop, can’t be canceled. And only an administration of idiot leftists would think that cultural bullying can somehow defeat military grade bullying. Tweets don’t beat tanks and shooting is a lot more powerful than scolding. The pen may be mightier than the sword, but that came from an era when writers generally had something worth saying.

In a culture defined by culture wars, narrative looks like victory. But narratives rarely last more than a few years. We can see now that some of the most powerful cultural trends of the past few years, Black Lives Matter and COVID safetyism, lasted only a few years. Where in the past a successful cultural movement might have stuck around for a generation, it’s now months.

When culture is worthless, nailing down real achievements means building things, earning money and winning wars. Culture and its narratives have ceased to be anything more than the momentary tactics and psychological spasms which leftist hegemony has reduced them to.

Ukraine’s propaganda campaign, unlike Russia’s and the incompetent virtue signaling of our elites, has been effective because while it can be misleading, it is grounded in an actual war. Westerners are bathing in the propaganda of a culture war which is not only misleading, but the hollow pursuit of hollow people using a war thousands of miles away to try and feel something.

Free of any real risk, Americans are able to vicariously imagine themselves in the roles of the Ukrainians or the Russians, fantasizing about a military intervention or a nuclear war that is not going to happen because despite the false immediacy of the media and social media, we are not actually involved. The war may be in our living rooms, but it does not actually touch us.

Propaganda and emotional frenzies are a means to an end in a war, but wokeness has made emotion into its own end. Saturday Night Live features the Ukrainian national anthem and special orders are rushed to China to purchase massive quantities of Ukrainian flags which had not been previously in demand outside of some areas of Chicago and Pittsburgh not because they really want Ukraine to win, but because it’s the latest show that they’re invested in.

And, much like with Game of Thrones or Succession, once the soap opera du jour is over, they will move on and forget that they were ever invested in that momentary vessel of their emotions.

There will be no World War III or IV because we’re too busy fighting World War Woke.

Biden, who fled Kabul and left thousands of Americans behind to avoid a clash with the Taliban, who is surrendering to Iran and China, and whose response to Putin is empty virtue signaling, doesn’t want a war. Neither do the vast majority of Americans. Even the ones demanding it.

Why bother? Social media is even better at delivering all the immersion of war than CNN could ever manage during the Gulf War. And, best of all, the highs and lows, the outrage and grief, come without any real losses or costs to us. Biden gets a massive distraction and people get to feel, to add flags to their profiles, pour vodka into gutters, and pretend that it’s all really real.

Whatever we do, the war will play out with the inevitable logic of steel, oil, and firepower.

People will die, as they have before in Georgia and the Ukraine, and then there will be a new war on TV. Perhaps Xi will finally make his move to seize Taiwan, or maybe Iran will move to try and destroy Israel in time for Purim. Corporations will signal their virtue, city councils will pass resolutions, and Biden will stumble through another meaningless teleprompter speech.

It won’t matter because we increasingly don’t matter. Our enemies know it and so do our allies.

The good news is that there will be no WWIII or IV. The West and America will not end with a bang, but with a social media whimper. While people elsewhere fight and die over the great issues of national destiny and religious freedom, wokes will cancel people over pronouns.

Then we will not have fought a war, but we will have lost the only war that truly matters.

Pastor Ron E. Thompson: What Can I Do, Lord?