Behind Ibram X. Kendi’s racist tract, How to Be an Antiracist, is a German publishing giant with a Nazi past. Kendi’s books have been published by Penguin Random House, which after a merger overseen by Bertelsmann executive Markus Dohle, and despite antitrust challenges from the Justice Department, became the world’s largest publisher under CEO Dohle. 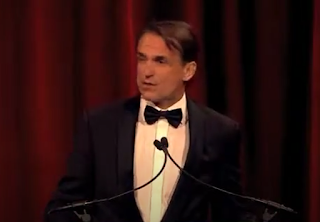 Bertelsmann, the German mega-publisher, whose owner had donated to the SS, which, employed Jewish slave labor, and long before Kendi, was infamous for racist tracts such as The Christmas Book of the Hitler Youth, is heavily invested in pushing racism on Americans.

And schools are a lucrative market for inflicting critical race theory on American students.

Now Dohle, in a New York Times story that suspiciously reads like a press release, has announced that he’s donating $500,000 to PEN to create the “Dohle Book Defense Fund”.

The fund by the wealthy German CEO appears to be meant to fight efforts by states, schools, and parents to keep racist hate out of the classroom like the kind purveyed by Bertelsmann which went from the The Christmas Book of the Hitler Youth to How to Be an Antiracist.

The New York Times connects efforts by parents “demanding the removal of certain books from schools” and local legislators working to keep “gender identity”, “pornographic material” and “critical race theory” out of the classrooms to Dohle growing up in Germany after WW2.

Dohle claims to be aware of “the dark times and the dark history of the country” in his native Germany, as if parents fighting to keep racist books out of classrooms makes them Nazis.

Parents already struggling with the disproportionate power of the Biden White House, which attempted to treat them as terrorists, and the smears of the media, will now also have to contend with the world’s largest publisher coming after them in order to protect its profit margins.

Dohle’s move however casts light on the role of Penguin Random House and the former Nazi megapublisher behind it in the war over critical race theory in America. None of the media stories about the Dohle Book Defense Fund bother to mention Kendi or the financial stake that the former Nazi book publisher has in forcing American schools to keep buying its racist hate.

Penguin Random House has aggressively marketed Ibram X. Kendi’s brand of hate to adults and even to children with the widely mocked Antiracist Baby, a board book for babies, and Goodnight Racism, which does for Goodnight Moon what Farrakhan did for bow ties.

(There’s even a card game: The Antiracist Deck. Whatever card you pick, you lose.)

Penguin Random House’s education arm however also pushes Kendi’s How To Be an Antiracist to high school students grades 9 to 12. Kendi’s Be Antiracist is targeted at grades 6-12.

Robin DiAngelo’s racist White Fragility is being distributed by Penguin Random House which promotes it for grades 6 to 12. Her latest, Nice White People, is designated for grades 9 to 12.

Ta-Nehisi Coates’s Between the World and Me is promoted for grades 9 to 12. There’s also the latest Coates book being adapted for young adults, The Beautiful Struggle (likely to be translated as Der Schone Kampf in German if Bertelsmann ever gets around to it.)

After all, Bertelsmann had only agreed to stop selling Mein Kampf in 1999.

It’s no coincidence that three of the most infamous racialist authors who, more than anyone, have helped mainstream racism, and have become the public face of the ideas inherent in critical race theory, are on the list of one single publisher. Or that the publisher’s CEO is now going to war against parents trying to keep Bertelsmann’s brand of racism out of their schools.

Previously few conservatives were willing to connect the dots to Penguin Random House.

But Markus Dohle’s declaration of war on American parents and conservatives may change that. The Dohle Book Defense Fund is not defending books, it’s defending the cash that Dohle’s company makes from hooking American kids on hate. PEN, which has failed to advocate for conservative writers being canceled left and right, is thrilled to act as a front for the financial interests of one of the megapublishers destroying the industry. It probably helps that Dohle sits on PEN’s Board of Trustees and has served as the Board’s executive vice-president.

(If you wonder why PEN won’t actually protect writers, read that last sentence one more time.)

American publishing has been carved up by foreign interests like Germany’s Bertelsmann and France’s Lagardère Group (publishers of In Defense of Looting) which have not only destroyed longtime American publishing firms like Random House and Little, Brown, and Company, but turned them into machines feeding hate, violence, and the breakdown of American society.

In the media’s press releases, Dohle neglected to mention his company’s financial interests, and instead claimed that he decided to invest at least $500,000 into fighting American parents because of “the future of our democracy.” Nothing says “democracy” like a German CEO using the world’s largest publisher and rivers of cash to bully American parents into backing down.

But as Dohle and Bertelsmann go to war to protect their racist business model, they may experience more of that “democracy” than they expect. It took a long time to wake up conservatives to the dangerous threat of monopolistic Big Tech companies. Dohle and Bertelsmann may be about to wake the same sleeping giant as Bezos and Zuckerberg.

Penguin Random House under Dohle signed a $65 million deal with the Obamas, and a $20 million deal with Prince Harry. Cuomo’s shady $5 million book deal came through Crown: an imprint of Penguin Random House. Hillary’s book deals came through Simon & Schuster which is set to be swallowed up by Bertelsmann extinguishing one of the last large U.S. publishers.

The Justice Department is fighting to block this latest Bertelsmann cannibalization of America’s publishing industry, but considering how many politicians have made millions from book deals through the German giant, the odds may not be on the side of justice.

If you follow the big book deals of politicians and the big racist book deals, they tend to lead to the same German company which is destroying our society and our culture for its profit.

Dohle and Bertelsmann could have been satisfied wielding their power from behind the scenes. Now they have declared war on American conservatives and parents, and that will raise questions about whether not only Kendi, Coates or DiAngelo’s racist tracts belong in our schools, but whether any Bertelsmann and Penguin Random House books do.

Greenfield: How to Destroy the Economy With This One Weird Socialist Trick