Biden recently released Mohammed al-Qahtani, the 20th 9/11 hijacker, and Zuhail al-Sharabi, another hijacker for an expanded version of the 9/11 attacks from Guantanamo Bay, so it’s only fitting that he’s trying to cut a plea deal with the mastermind of the attacks. 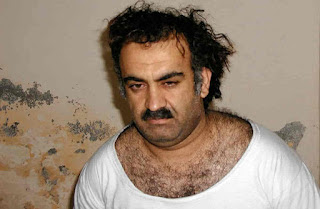 Khalid Sheikh Mohammed, the architect of the September 11 attacks, not to mention multiple other plots and acts of terror including the 1993 bombing of the World Trade Center and the brutal murder of Daniel Pearl, was captured in March 2003.

19 years later the trial has yet to go anywhere.

In 2008, the process of charging Khalid Sheikh Mohammed and four others began.

Attorney General Eric Holder announced that he wanted to bring Mohammed to a civilian court in New York. The backlash, especially from the families of 9/11 victims, was tremendous and the Obama administration overruled Holder. However Holder injected a poison pill into the system by going after the use of material gained through the terrorist leader’s interrogations and even from a “Clean Team” that independently obtained a confession from Mohammed.

“It’s a statement about what this Administration is about,” Holder boasted.

As if anyone needed further reminding of what the Obama administration was really about.

After that everyone settled in for a decade of lawfare by Mohammed’s lawyers who carefully sabotaged any effort to move the case forward by demanding classified information involving the system set up to stop, capture and interrogate Islamic terrorists. And their client and his legal allies followed the Al Qaeda lawfare playbook by making all sorts of frivolous complaints, such as objecting to the presence of female personnel, to drag out the case.

Their game plan was to get the government to settle. And they almost made it once before.

A previous effort to cut a plea deal with Mohammed was thrown out when Attorney General Jeff Sessions demanded that military prosecutors cut out any such nonsense. But now it’s back.

The trial of Mohammed and other terrorists involved in the 9/11 attacks finally began in 2021 and after a series of hearings was shut down again due to the pandemic before being restarted.

The Biden administration has been aggressively pressuring the Department of Defense to shut down Guantanamo Bay and free all the terrorists. Mohammed and his legal allies understand that, like Obama, Biden wants to empty Gitmo. The 9/11 mastermind has effectively used that in the past by demanding that he serve out his sentence in Gitmo instead of in Colorado.

Mohammed and his legal defenders claimed that Gitmo was a better place for Muslims.

Even though Mohammed had confessed several times already, a plea deal would have the terror boss trade a guilty plea in exchange for prosecutors dropping the death penalty.

Attorney General Eric Holder had promised that Mohammed would receive the death penalty. Numerous politicians, both Democrats and Republicans, assured 9/11 families he would. But Mohammed understood that, like his Taliban allies, all he had to do was wait out America.

Americans would care less about the September 11 attacks with every year that passed. The families of those who were killed in the Islamic terrorist attacks would grow old or die. The political and military systems would grow tired of jumping through legal hoops and surrender.

And that is exactly what’s happening.

The Obama administration warped the morale and patriotic fiber of portions of the military. Court officials who were once disgusted to even be dealing with Khalid Sheikh Mohammed and Al Qaeda terrorists have been replaced by those who now ferociously advocate for them.

At the Gitmo trial of an Al Qaeda terrorist last year, military officials serving as a jury sent a shameful letter whining that the terrorist’s interrogation was a “stain on the moral fiber of America” and “a source of shame.” The only stain here was in their treasonous cowardly letter and the only source of shame is that those who wrote it are still employed by the military.

The Biden administration is betting that it can cut a plea deal and clear the Mohammed case.

But in 2009, Khalid Sheikh Mohammed and his fellow terrorists had already entered their “Islamic” response to the charges against them which declared that “killing you and fighting you, destroying you and terrorizing you” are “considered to be great legitimate duty in our religion.”

Terrorism, the Islamic response explained, was an “offering” to Allah. It described the “blessed 11 September operation” as “our military attack”.

That’s an official confession without any duress whatsoever.

The Islamic response also admitted that even without any of the named pretexts, “it would have been the greatest religious duty to fight you over your infidelity.”

This infidelity was defined as “your statement that Allah had a son and your trinity beliefs.”

Al Qaeda would have been at war with America simply because it’s a Christian country.

“Our prophet was victorious because of fear,” the response boasted. “Our religion is a religion of fear and terror to the enemies of Allah: the Jews, Christians, and pagans. With Allah’s wiling, we are terrorists to the bone.”

It concluded by declaring, “Your end is very near and your fall will be just as the fall of the towers on the blessed 9/11 day.”

A country that still had any dignity left would have responded by stringing Mohammed and all the rest of them up. Instead another decade of legal wrangling and lawfare followed as military prosecutors and judges continue to insist that they have no idea how to try and convict him.

In 1942, with the war underway, Nazi saboteurs brought here by submarine were arrested by the FBI. They were caught in June, tried in July, and sent to the electric chair in August.

And that was for enemy operatives who had not even managed to kill a single American.

Meanwhile after 19 years of having the mastermind of the murder of thousands of Americans in custody, he has yet to be convicted and is unlikely now to pay the price for his crimes.

The military court system, which was meant to expedite the trials and convictions of terrorists as enemy insurgents during wartime, not criminal defendants protected by the Constitution, has been corrupted and broken. It needs to be replaced. But that is not likely to happen until the next phase of the war against Islamic terrorism is underway.

Meanwhile the political and cultural allies of the Islamists are running our government.

Obama sabotaged the process of bringing Khalid Sheikh Mohammed to justice and now, just as with the Taliban and Iran, Biden is finishing the criminal betrayal that his boss began.