One may begin to wonder if Democracy is a possibility today. One may also begin to wonder how it all came to this fix. History unfurled itself and spread into the present in many ways, all too fast for our eyes, ears, and any other sense to recognize. The world settled into what we now are seeing a global reset. When the world’s oldest democracy, infamous for its most recent step-back from a war on terror (because that was clearly the aim and not democracy instilling), itself is torn in its socio-political fabric, what would become of the rest of the world?

The pandemic has indeed made it difficult for a democracy to survive when ruled by an exceedingly small group of powerful people who hold a disproportionate amount of wealth, privilege, and political power hidden from the view of the people, they are shrouded in secrecy as the current administration secretly conceal themselves behind masks. Biden’s administration is promising a Presidency of transformational change, a temperate, peaceable, measurable change – deliberate equitable, and with racial autonomy.

Even when the laisse-faire breeding strain of liberalism assumes power at hand, the actuality is such that it reflects a dictatorial plan of action by the puppeteers who manipulates an inanimate object, called Biden to create the illusion that this puppet is alive. Tough times need tough measures – how easy is it for leaders to cherry-glaze evidence of totalitarianism, make it pass as a mere, momentary inconvenience that is under repair in a democracy? On either side of the political spectrum, we now see these tough measures gain favor and accolades – after all, parties are assured continual regimes in the name of safety. The planned pandemic has made it easy for totalitarianism to be ushered in, in all its glory.

Biden has made America look like a fool as rogue regimes run amok in the face of his weakness. And instead of the unity he vowed, Biden fanned the flames of hate and division, even stoking racial equity tensions for partisan ends with his incoherent disgusting, cynical rants.

Similarly, American school boards are enacting Critical Race Theory rules prohibiting teaching students about our history of American slavery, racism, and genocide, other modernized countries REQUIRE their young people to be taught about their own evil past (and present) in the hopes that the next generation will not make their parents’ mistakes. So German students are thoroughly enmeshed in learning about the Holocaust. “French students are taught about their brutal colonial past in Algeria and Vietnam. Irish students are aware of the abuse caused by the Catholic Church. Spanish students get courses on the evils of fascism and Spain’s fascist past. Most people around the world admired our creativity and inventiveness. This makes their incredulity even worse — they simply cannot figure out why in a democracy with a constitution from birth we allow this misery to continue.” (“The Laughingstock of the World – Michael Moore”)

During this planned crisis, the situation resembles something of a war, a sort of “Wag the Dog”: 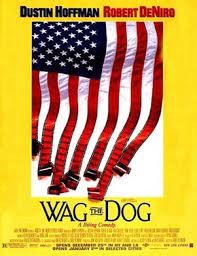 a situation in which powerful people are controlling and manipulating someone or something that is much less important or powerful. The current government has all control and access. It can bar the emergence of conflicting opinions, thus making freedom of speech and expression a not so fundamental right during these times. The world of today, America included, does not understand that for any dialogue to sustain, it is necessary for two ends to be in existence – even more than two, for that matter. Contradictory opinions are allowed to exist. But we can assume that it is not that the world fails to understand this reality; it simply does not want dialogue. It does not want critical, rational reasoning amongst the masses. The leaders of today want the citizens to be puppets – or worse, mechanized entities that will go on, not questioning anything that is imposed over them. They are happy in their comfort but even this comfort is engineered so that they do not see the true standards of living that they deserve. When the bubbled reality is such, why would anybody want to opine on anything? It is best then, for each citizen to lead an apolitical life, cherishing the subtle breeze of non-harm.

“Whenever elites own everything, everyone else is shackled to horrible jobs just to survive, while the elites live in obscene luxury with no thought to the misery and suffering of the masses.” Sound familiar? In the wake of the global pandemic, today’s elites are taking back the planet they believe that the world rightfully belongs to them and putting the rest of us back where they believe we belong – in economic chains. (“You Will Own Nothing and Be Happy” Is Just Feudalism 2.0 …”)

We are watching social media turn watchdogs for the government as well – the term watchdog is not so much activistic goodness here. When Twitter and Instagram go on to censor voices and chart up a list of reasons for the same, one can only think of the absolute peril that this holds for all. It could lead up to the complete erasure of one’s virtual identity and through that, the records of their words and voice spread out over the multiverse of platforms, get crushed under the weight of an extended arm of the government. That there is now a metaverse that everyone jokes about is ironic in this sense. Tough times need tough measures – but this kind of a tough measure was always lurking around, pandemic-era or not.

Can there be a return to true Democracy? There are valid doubts. All that we can strive for is the relentless pursuit for free voice and free choice; for our rights to be preserved and armed in resistance.

It is not “imperial ambitions” if those are the people who ask for support, and the support is provided without a single shot. Imperial ambitions are flunking thousands of American lives and billions of American taxpayers` money down a dead-end and shameful military operations and policies that only make the United States the most hated country in the world.

Imperial ambitions in Afghanistan had once again been thwarted. This time, it is the Americans who slunk off in defeat as Joe Biden calls it. The grandiose plans for nation-building were long forgotten, in the end, winning the war proved too much. Afghanistan has taught us another old lesson about imperial blowback. These warmongers’ ambitions are threatening another world war to a whole region that chose its own development scenario, forcing countries to give up their independence and keeping them hostage to make a statement. “Empires do not last, but their legacies do. What we do today, we live with tomorrow. All of which raises the question, how should the world relate to the new atrocities it is likely to commit? What is to be done with despotic nations that violate basic human rights”? (“Empires Don’t Last, But Their Scars Do – In These Times”)