Georgetown University professor C. Christine Fair tweeted that “white men” who defend Justice Kavanaugh, “deserve miserable deaths while feminists laugh as they take their last gasps” and then “we castrate their corpses and feed them to swine.” 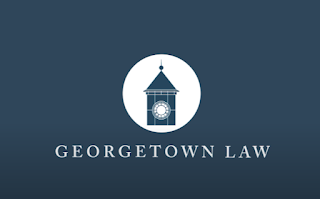 In response, Georgetown helpfully clarified that Fair’s belief that white men who support due process should be killed and castrated were “not the views of the University”, but pointed out that, “our policy does not prohibit speech based on the person presenting ideas or the content of those ideas, even when those ideas may be difficult, controversial or objectionable.”

Georgetown’s law school took a very different position after law professor Ilya Shapiro tweeted criticism of Biden’s decision, one opposed by 76% of Americans, including a majority of Democrats and non-whites, to only consider black women for the Supreme Court.

Shapiro correctly pointed out that choosing a Supreme Court Justice based on race would lead to a lesser choice. As the vast majority of Americans, Democrats and minorities, agree. But Georgetown, which did not suspend a professor calling for the murder and castration of white men, decided that the constitutional professor’s speech had to be condemned and prohibited.

Shapiro, who was to lead the law school’s Constitutional Law Center, got a lesson in how Georgetown views free speech and academic freedom, when it placed him on administrative leave.

Dean William Treanor described Shapiro’s tweets as “appalling” and insisted that they, “are at odds with everything we stand for at Georgetown Law and are damaging to the culture of equity and inclusion that Georgetown Law is building every day.” Here’s what that culture looks like.

There was no condemnation, let alone a suspension of Mitchum from Georgetown Law.

Dean William Treanor had no thoughts on Mitchum tweeting, “White men are violent. Period” or, lest there be any ambiguity about his racism, alsotweeting, “White people are evil.”

I reached out to Dean Treanor and Georgetown’s press office to ask whether they would be taking any action against Mitchum, but there has been no response. Apparently declaring that “white people are evil”, “all white people are racist” and “white men are violent” is wholly in accord with Georgetown’s culture of equity and inclusion. And its academic interests.

In, “The Dangers of White Spaces”, Bryce Huebner, a Provost’s Distinguished Associate Professor at Georgetown, inveighs against everything from “Google’s white background” to “white spaces, spaces constructed around white bodies” not to mention “white values”.

“If white people are not a ‘real’ group, then there is nothing to work to preserve,” he argues, and nothing that makes white people “all white aside from an oppressive ideology.”

The Georgetown Library promotes, “Decentering Whiteness in the Classroom”, while the Reading Race Book Club at the university offers, “The Whiteness of Wealth”.

One day Georgetown will save time by putting up a sign, “No Whites Allowed.”

That brand of racist academic discourse isn’t unusual at Georgetown University or throughout academia where papers and talks now routinely read and sound like Hitler speeches.

The existence of white people explains every ill from obesity to global warming to inequality. The only rational conclusion to be drawn from this sort of academic discourse is that if white people were to vanish tomorrow, or be eliminated, the world would immediately become a utopia.

Much like Mitchum and Fair’s rants, none of this is at all out of step with Georgetown’s values.

The racist double standard here is glaringly obvious. Even the mildest criticism of the racist idea that candidates for the highest court in the land should be selected based on their race meets with furious condemnation and an unlawful suspension of a respected constitutional expert.

Meanwhile, even the most vicious rhetoric from faculty members about how much they hate white people, men, Republicans, and everyone who is different than they are, is fine.

Georgetown University’s Faculty handbook claims that it “is committed to free and open inquiry, deliberation and debate in all matters” and the “untrammeled verbal and nonverbal expression of ideas” and insists that it gives all “members of the University community, including faculty, students, and staff, the broadest possible latitude to speak.” Except on affirmative action.

It’s understandable that Georgetown Law is sensitive on the issue of affirmative action.

Last year, the law school purged two adjunct professors, Sandra Sellers and David Batson, after the former complained that black students were lagging in her classes and the latter for not objecting, and noting that, “What drives me crazy is…the concept of how that plays out in whether that is my own perceptions playing in here with certain people’ or ‘my own unconscious biases playing out in the scheme of things.”

Treanor declared himself to be “appalled” and their heads rolled while the issue of affirmative action elevating students who weren’t ready went unaddressed to everyone’s detriment.

Admitting students who are less likely to succeed doesn’t help them, it hurts them.

Virtue signaling doesn’t actually help black people. Police defunding and support for the racist nationalism of Black Lives Matter led to the deaths of thousands of more black people. Affirmative action pushes black students into colleges where they are more likely to fail. That’s not because black students are intellectually inferior, but because they’re not selected for merit.

The same is true, to some degree, of legacy admissions. It’s why the USC fraud cases did not produce stellar students. When you use a criteria other than academics for an academic setting, the results, whether it’s hiring politicians as professors or picking students based on race, will always be worse than they would have been in an honest system that rewards merit.

And no amount of censorship, suspensions, firings, or critical race theory will change that truth.