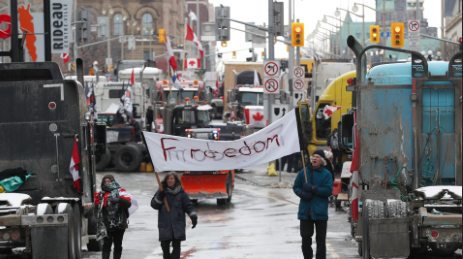 What does a democracy thrive on? It is most definitely not the crushing of voices, the crackdown on protests, or the deliberate hushing of the margins that qualifies as a true democratic proceeding. You would, as Western ideals mandate, expect a so-called ‘liberal, ‘left-oriented’ party to behave like multiplicity and diversity in a populace. But observing America as it has become in the past year and a half makes one doubt this mandate, this wretched conclusion that people so often arrive at. If there is one thing that has been proven to the masses of viewers, the keen observers of all things political, it is the futility of drawing unfounded parallels between party ideals and what goes on down on the ground.

What has occurred because of the suspicious dubious supply chain crisis that began over a year ago? The Biden administration had been talking about “the new normal” – things that might have seemed strange before the virus has become an integral part of our lives today whether we want it or not.

The “New Normal” takes different shapes: from positive and progressive trends like the development of telemedicine, teleworking, and popularization of home-schooling to restrictions of constitutional freedoms, which are now being served and digested easily under the sauce of the “Quarantine Measures.”

Today the most offensive outcomes of the new normal may still seem unconvincing in the 21st century as we see cargo ships in U.S. ports languish at sea. Our nation is affected no matter where you live and stand on the matters of political governance: quarantine restrictions and the mandates which have brought our global economy to a standstill. The ongoing supply chain crisis empties the shelves of our markets, enabling skyrocketing prices for the goods that are yet available and remain off coasts on cargo containers. Truck drivers waiting at ports willing and ready to hall their valuable cargo to markets in cities around America. These products have been delayed in ports waiting to be offloaded for upwards of 6 months while out-of-control inflation takes hold of an already crisis-ridden economy forecasted by the current administration.

Thanks to record-high inflation price hikes of common necessities including food, housing materials, and energy, are going up at the fastest pace in decades, affecting the price of things most households need and overshadowing the job and wage gains many Americans experienced more than two years ago.

Picture in your mind the countless images from around the world of freedom-loving patriots, hardworking blue-collar wage earners just wanting to go to work, feed their families, take responsibility, and live unimpeded by government mandates.

Global demonstrations, marches, and rallies of patriots seen on alternative media sites. United States MSM has ignored since the first of the year many peaceful protests from around the world against these socialist liberal mandates. Recently from our neighbors to the north, Canadians have taken center stage calling for liberty and freedom from those mandates. Joining with those huge rigs – truck drivers block roads, politicians’ homes, and government buildings. Setting a stage reminiscent of the 1960s, a “sit-in” sort of protest using their big rigs parked along freeways all the while blowing their horns incessantly. The most popular strategies used in the 1950s and first half of the 1960s were based on the notion of non-violent civil disobedience and included such methods of protest as boycotts, freedom rides, voter registration drives, sit-ins, and marches.

A siege of independent truck drivers that have been sanctioned by government mandates to mask and receive multiple injections to deliver their goods. Rather silly nonsense. These drivers travel alone, sometimes with a family member making their deliveries late into the evenings to loading docks rarely seen by another soul. A large group of truckers has garnered millions in fundraising dollars from droves of supporters as it drives across the country to protest mandates. Most truckers set off from Vancouver on January 24th on their “Freedom Convoy”. There has been a show of strength from the regular working people joining and voicing their disagreements in the streets and bridges along the highways of every city across Canada. The clashes with the police have been ordered by the local and state government, the police were told to take the truckers fuel, escort their children and families out of restaurants and shops in the freezing snow and rain. Now picture the smiling trucker talking about love of country, faith in God, and waving the Canadian flag with their children and family dog in their cabs permitting their children to observe what can happen when we see oppressive despotic governments take hold of your freedoms, and our liberties.

Tucker Carlson said, “What will they remember? The hysteria of the people in charge as they look out on the sea of working-class people who are sick of being pushed around told what to do and when they could do it. The people in charge are extremely upset about this. Hysterical and panic-driven. It is hilarious. You can just picture in your mind the U.S. appointed by Biden a tiny transportation secretary, little Pete Buttigieg jumping up and down, shaking his little hands, screaming at the truck drivers, get off my bridge, you guys, get off my bridge right now!”

This is not how confident people speak. These are squeaks of weakness. These so-called leaders are livid at the truckers because they know that there is nothing, they can do about the truck drivers in these big rigs. These truckers removed their tires completely to defy the Prime Minister of Canada, Justin Trudeau. He finally came out from hiding to threaten the protesters directly and ordered police who the patriots have labeled “Brown Shirts” who have begun arresting the truckers and their families. The U.S. truckers have joined the Canadians under the Ambassador Bridge as a show of solidarity. U.S. big riggers are considering their own protest of mandates starting in Sacramento, CA to Washington DC., March of 2022.

It is all about politics. All the restrictions mentioned above, and outcomes provide a wide field for political maneuvering. From changes in legislation, social policies, and healthcare to manipulation with immigration policies and lobbying for the interests of players. The best part is that everything mentioned above has already happened, and humanity is aware of the outcomes of such policies. Today we call a Supply Chain Crisis is an economic model, which has been widely used in the socialist economy. Do we witness history-making another spiral spin today?

From New York Times, “As Ottawa remained paralyzed, protests pandemic measures, the demonstrations continued to reverberate beyond Canada, with a new road blockade temporarily cutting off the country’s busiest border crossing and copycat convoys spreading to New Zealand and Australia, with plans for a third in the United States.”

As the pandemic wanes, economic and physical insecurity, violent conflict with political despot bureaucrats and democracy’s guardians struggle against authoritarian foes, shift the international balance in favor of tyranny. Incumbent politicians use force to crush their constituents in the name of public health, while beleaguered protesters face heavy jail sentences, punished, or simply disappear in some countries including our own by the current administration in the United States.

The long democratic recession is deepening.

The Convoy to DC 2022 movement, organized by the truckers, tow truck drivers, and farmers – as a response to the Canadian counterpart that has now emerged as an inspiration of sorts – is being arranged peacefully. In a democracy, there must be space for all opinions, ranging from A to Z. There must be space for these arguments and for people to engage with one another. Any dialectic that does not take such democratic nuances into account would do more harm than good. For a demography as diverse as that of the US, it is natural to expect such tolerance. Intolerance of differing opinions and a purposive stance to crush a ‘non-normative’ idea or concept would be a disaster! In doing so, one is scorning upon the objectives that the nation’s founding fathers set up for the country to progress over.It should be the government’s responsibility to pay heed to the voices that are erupting from the masses – it should ask, ‘what do people honestly think?’ If this cannot be realized, then we must return to the question first posed in this article – what does a democracy thrive on? Differences. It thrives on differences. Now, would cutting these differences short make America a good democracy?

Elon Musk said, “The duty of a leader is to serve their people, not for the people to serve them.”