If you were to watch CNN, the former cable news network’s biggest story about Hillary Clinton is that she’s selling a $32 baseball cap with “But Her Emails Hat” stitched on it pink as a “dad hat”.

Unlike Jeffrey Epstein and Vince Foster, Hillary and CNN’s credibility really did kill themselves. 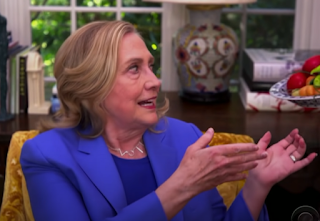 Compared to Uranium One, the Lincoln Bedroom, and the State Department, this lame meme may be the least offensive thing that Vince Foster’s former boss ever sold at a markup..

Outside the mainstream media echo chamber, the big story is that the latest revelation by Special Counsel John Durham exposes more of the scope of the Clinton spy operation. We already know that elements of Russiagate encompassed recruiting Christopher Steele, a former MI6 operative, and Igor Danchenko, an alleged former Russian FSB agent employed by a Qatari-allied think tank, already arrested and indicted as part of the Durham investigation.

The big Hillary revelation doesn’t involve the $32 baseball cap that CNN is promoting, but a digital Clinton spy network that allegedly targeted Trump Tower and even the White House.

In the fall of 2016, as the election was approaching and the investigation into her own server was heating up. Hillary Clinton threw out the bizarre claim that “computer scientists” had “uncovered a covert server linking the Trump Organization to a Russian-based bank.”

The secret Russian server was too much even for most of the media which had a boundless appetite for Russiagate garbage, but the discredited story did have a real scandal behind it.

The Durham Indictment of Clinton lawyer Michael Sussmann in September revealed that a tech executive “had exploited his access to non-public data at multiple Internet companies to conduct opposition research concerning Trump” and “had enlisted, and was continuing to enlist, the assistance of researchers at a U.S.-based university who were receiving and analyzing Internet data in connection with a pending federal government cybersecurity research contract” and “were continuing to coordinate with representatives and agents of the Clinton Campaign.”

The latest filing notes that “The Government’s evidence at trial will also establish that among the Internet data Tech Executive-1 and his associates exploited was domain name system (“DNS”) Internet traffic pertaining to” Trump Tower, Donald Trump’s Central Park West apartment building, and the Executive Office of the President of the United States.

This wide net was being used to bolster claims of Hillary’s secret Russian bank nonsense and continued well after the election was over and President Trump was in the White House.

The Clinton spy operation always had two trajectories, a public smear campaign intended to affect the outcome of the election, and a covert coup exploiting allies in the DOJ. The latter effort continued well after the election was over and was an actual “attack on democracy”.

Turning to a British former agent who was allegedly sourcing material from Russian spies was bad enough, but the Clinton spy network was literally spying on a sitting president. That’s not the behavior of political opponents, but domestic enemies. Passing the products of that spying on to the FBI as supporting evidence for removing Trump from office was an actual coup.

It also goes to the question of the “Resistance” within the government loyal to a faction and working to coordinate with it and its media allies to bring down a sitting president. It has been widely alleged that “Tech Executive-1” was Neustar Senior Vice President Rodney Joffe.

Glenn Yorkdale, Neustar’s director of professional services, had worked as the White House’s Director of Security Programs for the National Security Council under the Clinton administration.

Scott Deutchman, Obama’s Deputy Chief Technology Officer, had served as Deputy General Counsel at Neustar during the election and until 2018 before joining up with Google.

Michael Rowny, who is on the Board of Directors of Neustar, was a veteran of the Carter White House. Lisa Hook, Neustar’s former President and CEO, served on Obama’s National Security Telecommunications Advisory Committee. Joffe was described by Neustar before his retirement as “one of the White House’s go-to security experts”.

To understand the explosive nature of Hillary’s spy network, you need to understand Neustar.

Neustar had been spun off from defense contractor Lockheed Martin (which has a huge government footprint) and it had the massive NPAC golden egg at its disposal.

NPAC or the North American Numbering Plan is where you get your phone numbers.

As a Foreign Policy article touting a role for Neustar in managing the NSA’s secret database under Obama noted, “it keeps a record of all cell phone numbers in the United States. The company also acts as a kind of middleman between law enforcement agencies serving surveillance warrants on telephone companies.”

Joffe was quoted as being very enthusiastic about getting involved with the NSA database.

The tech exec, who allegedly wrote, “I was tentatively offered the top job by the Democrats when it looked like they’d win”, later retired the same month of the original Sussman indictment.

In the summer of 2016, Neustar lost the NPAC contract it had held for nearly two decades in an FCC bidding war. That put the company, which derived around half of its revenues from NPAC, in a very bad place. But Neustar still had DNS registry and resolution services.

DNS services, much like NPAC, served as a kind of organizing principle, as a map of internet traffic. The tech company in question, anonymous in the filings, was allegedly providing DNS resolution services to the White House Executive Office.

That allowed it to spy on White House traffic.

UltraDNS, Neustar’s DNS operation, didn’t quite have the same reach as its NPAC contract, but its clients have included Netflix, CNN, the BBC, Nike, Mercedes and manages over “14 billion daily DNS queries”. And Joffe wasn’t just a Neustar exec: he was the founder of UltraDNS.

The entire Alfa Bank scam depended on, as Durham’s filings demonstrate, a misreading of the information. Joffe had all but admitted as much. But as we had already seen with the FBI, Clinton allies just needed to generate enough smoke to create the illusion of a fire.

Spying on the White House and Trump Tower added to the general sense that there were many connections between Trump and Russia. And the preponderance of those connections, often manufactured by methods as sloppy as the “secret server” or media stories about Steele’s dossier being treated as confirming evidence, allowed the Clintons to launch a coup.

The Clinton spy network may at times have seemed inept, but the breathtaking scope of their abuses has only been matched by the media’s reluctance to address their shocking violations.

If Joffe, Neustar and UltraDNS indeed turn out to be involved, as some reports have alleged, then the implications of the investigation go beyond Trump and the 2016 election, and the attempted coup afterward, and strike at the privacy of millions of Americans.

Many of whom have political views that could potentially make them surveillance targets.

The media will report on Clinton’s hat, but not that a company with vast powers of surveillance over much of the country’s internet traffic has allegedly been implicated in spying for Hillary.

The privacy violations from a powerful company have earned a tiny fraction of the media coverage lavished on reports of NSO Pegasus software being used to spy on leftist activists.

And yet that may be the biggest story here.

Neustar has since been purchased by TransUnion. The credit reporting firm has “200 million files profiling nearly every credit-active consumer in the United States”.

These are businesses where privacy violations are the ultimate civil rights nightmare.

Will there be any reckoning for the Clinton spy operations, not just for the lawyers who served as their middle men, but for the tech firms and companies who eagerly did their dirty work, in an industry that already relentlessly censors conservatives and elevates leftist narratives?

Peter Schweizer: Why Did Hunter Biden Tell Secret Service Not to Accompany Him Overseas?

Dr. Naomi Wolf: On the Subtlety of Monsters