“First thing I said was every single Shark, boy and girl, needs to come from the Latinx communities,” Steven Spielberg said. Every single ‘Latinx’ in America may have shown up to see Spielberg’s reworking of West Side Story, but not that many Latinos were interested. 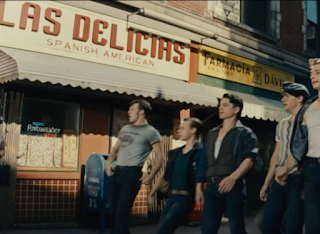 The Comscore rating showed that only 30% of West Side Story’s audience was Latino and that they rated it lower and liked it less than white audiences did. While the failed movie musical had plenty of reasons for turning into one of the year’s biggest bombs, its “Latinxface” didn’t help.

The original musical was going to be about Irish and Jewish gangs, and then Mexican gangs in L.A., before finally returning to New York City and a Puerto Rican gang. Jerome Robbins, Leonard Bernstein, and Stephen Sondheim might have known something about New York Jewish immigrants, they knew nothing about Puerto Ricans. And didn’t pretend otherwise.

Latter day hacks like Steven Spielberg, who has spent the last twenty years churning out Oscar bait interspersed with brief failed attempts at going back to popular entertainment, and leftist amanuensis Tony Kushner, tried to pretend that they did through the facile lens of wokeness.

And yet their $100 million bomb shows that they have even less of a clue about Latinos.

West Side Story had a good plan on paper. Latinos make up a quarter of the country’s moviegoing audience. More importantly, like most minorities, they’re far more likely to show up to movie theaters week after week. Why not revive a classic Hollywood movie musical, layer it over with wokeness, and wait for the Latinx moviegoing masses to beat a path to the theater?

For one thing Latinx isn’t just an assault on the Spanish language, it groups people with very different backgrounds into a single category. That may be useful for Democrat voter outreach, but Mexican-Americans in Texas weren’t all that invested in Puerto Rican nationalism in NYC.

The original Jewish boys who made West Side Story understood that audiences would care a lot more about the love story in the latest reworking of Romeo and Juliet than about getting the culture or identity politics right. But wokes always prioritize their politics over the human story.

They can’t tell stories about people because they believe politics is more than people.

As a gay socialist playwright, Kushner failed to make a doomed teenage love story come alive, but he was much more interested in delivering yet another political lecture. Latino moviegoers opted out and bought tickets for the latest Spider Man movie because they, like most moviegoers, wanted entertainment, not identity politics in exchange for their fifteen bucks.

The assumption that minorities are inherently political and that they not only share the politics of obnoxious woke twerps like Kushner, but want to hear about them non-stop is central to the leftist narrative, but as detached from how people actually live as the neologism, Latinx.

“We just wanted for this movie to get it right in the way that we wanted every single person who plays a Puerto Rican to be from the Latinx community, and that was a mandate from the get-go,” Spielberg said.

Did Latinos actually care that Spielberg’s Maria, unlike Natalie Wood, is half Polish and half Colombian, instead of fully Russian? Did the average Puerto Rican feel more represented by a half-Colombian from Hackensack than they did by the daughter of Russian immigrants?

The old Hollywood understood that the stories that mattered were universal ones, but the new woke entertainment industry insists that only particular minority stories matter. Not only does that destroy the signature universalism that made American entertainment a worldwide export, but the lefties who advocate particularism over universalism are horribly bad at implementing it.

After all the complaints about Hollywood movies “othering” minorities, all the wokes have to offer is a new wave of “othering” minorities by depicting them as oppressed victims. When significant portions of a minority group appear to have little interest in being victims, then the Democrats and the Left, including their culture industries, have no idea what to do with them.

The wokes want all of life to be about politics, but what if a key part of their base would rather have a steady paycheck or be swept away with a love story while leaving the politics behind?

The Latinx crisis is both political and cultural. It’s why Democrats struggle with a Latino electorate that appears to swing with current affairs, rather than staying on the plantation. And it’s why Latino audiences don’t seem all that interested in playing their part in the culture war.

Disney’s losses on West Side Story may well be nothing compared to the massive losses that Democrats have begun suffering from Latino voters who are sending an equally clear message.

What Latinos want from their politicians and their movies is not so different from what everyone else wants when they go to vote or out for the weekend. There are real cultural and national differences, but when the wokes deny the possibility of universalism, they spend all their time talking down to Latinos, instead of talking to them. And that’s how Spielberg’s $100 million bet turned into a huge box office bomb and why the 2022 midterm elections are looking grim.

Dr. Fred Eichelman: Deanna Lund, an Actress Who Fought Giants in Fiction and the Real World