Quintez Brown, a Black Lives Matter activist, walked into the campaign office of a Louisville political candidate and opened fire. Bullets grazed the clothing of Craig Greenberg, a local businessman running in the mayoral election, as people ran for cover from the shooter. 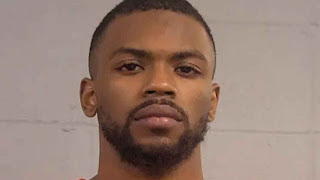 Brown’s bag carried extra magazines suggesting that he had come prepared for a massacre or an extended firefight. However the people in the office barricaded the door and the Black Lives Matter activist ran for it.

The police caught him anyway.

After years of campaigning against the police with BLM, the arrest came as poetic justice, but it was followed by BLM’s Louisville Community Bail Fund bailing out the assassin.

“It is nearly impossible to believe that someone can attempt murder on Monday and walk out of jail on Wednesday,” Mayoral candidate Craig Greenberg said.

And yet that’s always been the goal of BLM and the pro-crime police defunding movement.

“There is simply no defense for a would-be assassin to be released on bail, 60 hours after firing on his intended target,” Adam Edelen, the former Chief of Staff for Kentucky Governor Steve Beshear, tweeted.

Brown had led a charmed life long before the shooting. After a free ride scholarship to the University of Louisville, he met with Obama as a fellow at the Youth Violence Prevention Research Center, along with John Legend and Michael B. Jordan, got a column at the Courier Journal and was planning to launch his own political career.

After a very privileged life, it’s not surprising that Quintez Brown retains his political privilege.

Black Lives Matter is a racist and antisemitic hate group, and Brown’s increasingly hateful and antisemitic views were not out of line with his fellow black nationalist bigots. BLM’s decision to bail him out of jail is evidence that the hate group continues its support even after the shooting.

And who was behind Louisville Community Bail Fund?

The bail fund is a project of BLM Louisville, but its fiscal sponsor is the Alliance for Global Justice. AFGJ had been created to support Marxist Sandinista terrorists in Nicaragua and its backers include George Soros, Tides, the Ben and Jerry’s Foundation, and other wealthy leftists.

The Louisville Community Bail Fund was originally set up to bail out BLM rioters during the violent mob scenes over the death of Breonna Taylor who was killed when her boyfriend opened fire on police officers during a drug raid. Celebrities who rallied on social media to celebrate the drug dealer’s girlfriend also promoted donations to the bail fund in order to help the rioters.

“If you are heartsick over racism & injustice, let it manifest action, work towards justice, however you can manage,” Hamilton creator Lin-Manuel Miranda tweeted, along with a link to the Louisville Community Bail Fund. “If you cannot donate, amplify/volunteer.”

Some of these tweets were organized by celebrity, music, and women’s magazines like Billboard, Vogue, Harper’s Bazaar, and Marie Claire who cheered support for the racist rioters devastating cities and provided convenient links enabling readers to donate to free them.

Rapper Janelle Monae tweeted, “I’m getting heroes out of jail in Louisville. Join me if you can (especially those who seek to be allies). Let’s donate.”

Monae, despite no discernible talent, has multiple Grammy Award nominations, is a Cover Girl spokeswoman, and Boston even created Janelle Monae Day to honor her. She appeared in the revisionist history movie Hidden Figures and has faced no consequences for her activism.

Front Page Magazine reached out to some of the celebrities who donated to the bail fund for a racist hate group in light of its role in bailing out a political assassin, but received no reply.

The cast, crew, and producers of FOX’s sitcom Call Me Kat, also made a collective donation.

“I set our upcoming Fox series in Louisville to honor my hometown,” executive producer Darlene Hunt said. “But in light of current events, supporting the Louisville Community Bail Fund seemed like an important way to not only honor my hometown but to also hopefully promote positive change.”

How releasing rioters to destroy more of the city would promote positive change was unclear.

Schitt’s Creek star Dan Levy tweeted, “Disgusted. Enraged. Heartbroken. Please contribute if you can. Justice should not be a luxury” along with a link to the Louisville Community Bail Fund.

Now it’s Louisville residents watching a racist assassin being set free who are disgusted and enraged at this betrayal of justice aided and abetted by millionaire celebrities from California.

None of the actors whom I contacted about their support for a fund that bailed out a political assassin were interested in replying and addressing the issue. Much like the celebrities who supported Black Lives Matter were unwilling to discuss the devastating riots, destruction of family businesses, and deaths caused by the racist hate groups they were supporting.

The violence that Quintez Brown unleashed in a campaign office did not come out of nowhere.

Black Lives Matter lives by violence and hate. The hate that Brown spewed on social media did not get any attention until he opened fire. And even then his apologists are claiming that his actions are the result of mental illness rather than his association with a racist hate group.

The reckoning over years of Black Lives Matter violence, backed by corporations and celebrities, has yet to arrive. But as violence by the extremists drawn to the racist movement continues, those who funded violence and terrorism will have to answer for the consequences.

Greenfield: How to Destroy the Economy With This One Weird Socialist Trick