If there’s one newspaper that could have had “disinformation” copyrighted and then collected royalties from every Russian conspiracy theory, it was the Washington Post. 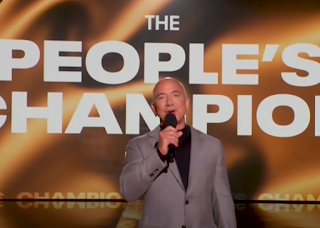 The Washington Post gained power and influence and its circulation and its profits grew as the paper spread lies, smears, and conspiracy theories that pandered to the prejudices and coup impulses of an angry base of D.C. Democrat government bureaucrats, politicians, lobbyists, and contractors who fancied themselves to be the “resistance” to the 2016 election.

The Post’s opinion section filled up with headlines like, “The Republicans have become the party of Russia”, but its news desk was no better with a false claim, later retracted, that Giuliani had been warned by the FBI that he was the target of a “Russian influence operation”.

Day after day, the paper built a case that Republicans were a “threat to democracy” by “spreading Russian disinformation”, and urgently needed to be deplatformed and censored.

Max Boot, a Washington Post columnist, cheered Big Tech’s censorship of a New York Post story about Hunter Biden while insisting that it was “Russian disinformation”.

We now know that there was no Russian disinformation, but that the Washington Post’s Big Tech boss was actually the one profiting from spreading Chinese disinformation to Americans.

The Washington Post had been purchased by Jeff Bezos while Amazon’s federal contracts and lobbying expenditures began to grow. One of Amazon’s biggest federal paydays was a $600 million cloud contract with the CIA. Then the Big Tech giant set its sights on a $10 billion military cloud contract known as JEDI. After the Trump administration noted favoritism toward Amazon, the contract was instead awarded to Microsoft, leading to an Amazon sore loser lawsuit. JEDI was then canceled and Amazon got a profitable piece of a new JWCC military cloud contract.

But a recently leaked internal Amazon document also revealed that the Big Tech giant was trading the Communist regime access to Americans in exchange for doing business in China.

While Amazon wanted the right to sell books to the Chinese, the Communist regime wanted to be able to push its propaganda through Chinabooks on the Amazon platform.

Jay Carney, formerly Obama’s press secretary, now heading up Amazon’s lobbying operation, was told before he flew out to Beijing that the key to persuading the Communist regime to allow Amazon to continue doing business was “the Chinabooks project.”

The China Books project is outwardly just another storefront, albeit stocked with books on Xi. The design may be crude but the agenda shows up at the beginning with a menu that highlights “Governance of China” and “Books on China’s Battle Against the Pandemic”. While the former category largely features Xi, the country’s Communist dictator, the latter is where the action is.

The various texts, political, personal, and even books on the pandemic for children, highlight the efforts of the Communist party and treat the battle against the virus as a vindication of the party.

The books often come through the Foreign Languages Press, an arm of the Chinese Communist Party that is used to spread disinformation and propaganda around the world. FLP is an imitation of the Soviet Union’s Foreign Languages Publishing House. While the Soviet Union had shut down and freshened up its FLPH propaganda operation in the sixties, China, which copied it in the fifties, has kept FLP going with few changes to the operation.

Amazon sells a lot of books, but with the Chinabooks project it had partnered with an enemy nation’s propaganda campaign in order to be able to do business with the Communists.

And much of that propaganda campaign was aimed at Americans.

Even while Amazon’s CEO was partnering his company with China’s state propaganda arm, his newspaper was accusing Republicans of being in bed with Russia. The Washington Post’s smear campaign was true, not of Republicans, but of its owner and his Big Tech monopoly.

Even as Amazon swallows up American retail, it’s become little more than a front for China. Its products come from China, but so do the third party sellers who dominate its platform.

And yet Amazon also wields enormous influence over American policy and politics.

Despite its close relationship to Communist China and other enemies, Amazon controls the CIA’s cloud and will have a chunk of the military cloud. Some of our most sensitive information is in the hands of a corporation that doesn’t think twice about collaborating with our enemies.

Amazon did not hesitate to give China’s Communist party the key to spreading their disinformation to American audiences. What other digital doors might it help China open?

Beyond the sensitive role that Amazon plays in our military and intelligence apparatus is the political role that it enjoys courtesy of its chairman’s ownership of the Washington Post.

The Post sets the policy agenda for the Democrats and columnists like Jennifer Rubin function as mouthpieces for the Biden administration. The partnership has been extremely profitable for the paper as lefty audiences ate up its Russiagate disinformation campaign, sending subscription rates sky high and making its articles trend on Big Tech social media platforms.

Qatar’s biggest foreign influence operation, involving the death of Jamal Khashoggi, a Qatari terror operative embedded as a columnist in the Washington Post, was enormously successful and quickly became part of the Democrat foreign policy agenda. The transformation of an old friend of Osama bin Laden into a political martyr would not have been possible without the unquestioning acceptance that the Post’s disinformation campaigns have achieved among the Democrats and even among some less sensible Republicans.

Even after stepping down as CEO to become Amazon’s executive chairman, Jeff Bezos still commands $180 billion worth of Amazon stock. The intertwining of the key media outlet of D.C. Democrats and one of the most powerful Big Tech monopolies in the country still remains.

So does the disinformation threat posed by the combination of Amazon and the Post.

Leftists most often accuse their enemies of their own sins. While the Washington Post colluded to censor its conservative political opponents to protect Biden’s electoral chances, Amazon stood to profit from Biden’s win, renewed relations with China, and a military cloud deal.

And while the Post claimed that Republicans were spreading Russian disinformation, it was actually the money behind its machine that was spreading Chinese disinformation.

The paper manufactured a threat by Republicans to cover up the threat that it poses to America.

As long as China calls the shots at Amazon, and the Big Tech monopoly and its paper call the shots in our retail sector and our nation’s capital, America remains in the grip of China.