“Take that boy and put him in a mansion
Paint the windows black
Give him all the women that he wants
Put a monkey on his back”
-American Roulette, Robbie Robertson 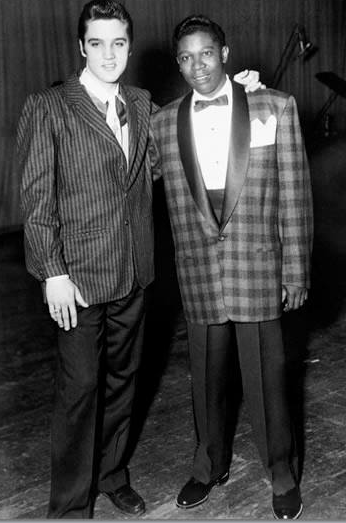 In late March 1972, a friend of mine named Pamela told me she had gotten us tickets for a great concert. At 14, my relationship with Pamela was filled with a mutual love of music and a shared fierce independence far removed from our local neighborhood boredom. I was intrigued by the concert ticket offer.

So I asked, “Who are we going to go see?” Pamela replied, “Elvis Presley!”

I couldn’t have cared less at that moment. I considered myself pretty musically sophisticated for the age of 14. I had particular passions for the Blues, Clapton, Hendrix and some Jazz. But I was a dilettante in my knowledge of Elvis Presley. I had been raised to the point of tediousness on Elvis’ travelogue movies in my 1960’s household. I thought I had seen it all.

Pamela placed an end to all further discussion with the words, “We’re going!”

The concert we saw on April 9, 1972 proved that sometimes some of the sweetest moments in life are when one is the most wrong in their preconceived assumptions.

Elvis Presley performed two shows that day, a 2:30 afternoon matinee and an evening show at the Hampton Roads Coliseum in Hampton, VA. We went with Pamela’s Mother, a lifelong Elvis fan, to the evening show.

My childhood opinion of Elvis Presley changed into the first gear of adulthood with the concert I saw on April 9, 1972.

I must admit, being a fan of the film “2001,” the use of the the Richard Strauss piece, “Thus Spake Zarathustra,” as an instrumental intro, intrigued me. Then drummer Ronnie Tutt did a powerful roll into a freight train version of the the old Blues song “See See Rider.” I knew in ’72 that this song had been originally recorded by the Blues singer Ma Rainey.

The next thing that got my attention was when the great guitarist, James Burton took a solo in See See Rider. In the course of the evening Elvis introduced James. I put two and two together and realized that this was the same James Burton that had played those great guitar licks behind Ricky Nelson on the Ozzie and Harriet show. James was even better on that April 1972 night. He was lightning fast with every note clearly executed, sounding at times, with his Paisley Fender Telecaster, like a pedal steel guitarist.

In total, the band and the back- up singers, including Cissy Houston, were astonishingly tight. But it was Elvis’ voice that captivated me.

To my young ears, Elvis Presley’s voice seemed larger than the big orchestra, the jump suits and the show business trappings of the presentation. It was the personification of the best part of his spirit.

I heard the depth of his soul in Presley’s voice.

I received the same sort visceral reaction to other singers that I saw in later years such as Muddy Waters, Marvin Gaye, Bob Marley and Otis Rush. But it was Elvis Presley’s voice that triggered my seminal reaction. The power of the human voice as blessed by God.

The concert that night was only about an hour long. The reaction of the crowd surprised me. There was a lot of teenage squealing from the women in the audience, including Pamela’s Mother. The years peeled back when Elvis sang to them. I remember my favorite song of the evening was “A Big Hunk of Love,” with it’s quick paced, almost stop time, rhythms. A truly astounding evening. The April 9, 1972 concert is on YouTube (you can watch it at the bottom of this article). Quite enjoyable to listen to this concert so many years later.

In 2019, President Trump paid a posthumous tribute to Elvis with the presenting of the Presidential Medal of Freedom. This was the first set of recipients for this honor during President Trump’s Administration. Other recipients included Baseball legend Babe Ruth and Supreme Court Justice, Antonin Scalia.

In the subterfuge that is social media there have been protests that Elvis Presley did not deserve this award, that Elvis was a racist and a junkie.

Let us first address the issue of Elvis Presley as a so-called “racist”. There is an urban legend out there that states that in a 1957 Boston interview with Edward R.Murrow, Elvis allegedly stated, “The only thing ******* can do for me is buy my records and shine my shoes.” This is absolutely false. At the time this was supposed to have occurred Presley had not been to Boston nor had he been interviewed by Murrow.

Yet, this urban legend continues to besmirch the legacy of Elvis Presley. Unfortunately as my Mother always said, “Repeat a lie and at least one fool believes it.”

Legendary Photographer Ernest C. Withers, who took the beautiful 1956 shot of Elvis and B.B. King that frames the beginning of this article, has remarked on the courtesy Elvis demonstrated to all people. Withers said, “He had respect for people by age and he had respect for Black people.”

Withers further stated about Elvis in Memphis, “He was fond of Walter Culpepper who ran a barbecue shop on Hernando Street. Elvis referred to the black proprietor as Mr. Culpepper. When he was asked ‘Why do you call him mister–he’s just a barbecue guy?’ Elvis said, ‘He’s a man.’ That,” Withers said, “is just humility in his temperament.”

Black musicians such as Bobby Blue Bland, James Brown, Roy Hamilton, Al Green and many others have commented publicly about the kindness and generosity of Elvis Presley. When the R&B singer Jackie Wilson had a stroke in 1975, Elvis paid the majority of his hospital bills. When asked at a 1969 press conference about being “The King of Rock and Roll,” Elvis differed to Fats Domino who was also present in the room. Elvis Presley always paid tribute to the musical roots of his inspired presentation of the American song.

In addition, Elvis Presley never called himself The King of Rock and Roll at any time during his career.

As far as being a junkie, well yes Elvis did drugs, Elvis liked drugs, at times was addicted and, unfortunately, died of a poly-pharmacy overdose. He was introduced to amphetamines by a Sergeant in his Army unit. As the years went by those amphetamines were framed by barbiturates and later, narcotics. He was not the first to abuse drugs and he won’t be the last. He was a great artist in spite of his drug use.

In Colonel Tom Parker, Elvis Presley had a terrible Manager. Parker looked at Elvis as a commodity, like cornflakes. A responsible manager would have helped Elvis to get off of hard drugs, made sure he had the best material to sing and would have presented him with a broad set of challenges as a singer and as an actor. Colonel Tom Parker was not the best steward for Elvis’ career. He ripped him off. He took 50% of all of Presley’s income while smoothing out the rough edges that made his music special. Shameful.

Ultimately, Elvis Presley was one of America’s greatest interpreters as a singer. He moved easily from Blues to Rock and Roll to Country to Gospel and beyond. Born on January 8, 1935, in Tupelo Mississippi, he changed the musical landscape for America and was the impetus for the first explosion of the American youth culture. He was a pure product of the American South. Though as the poet William Carlos Williams wrote in his poem, “To Elsie”: “The pure products of America go crazy.”

I think Elvis Presley was an artist frustrated by the velvet prison he was trapped in. A prison that left him lonely and isolated. As an audience we should have demanded more from him as an artist. However, it was not all darkness in his life. He had a lot of fun and got into his own share of mischief.

My favorite period of his music were his innocent early days on Sun Records in Memphis. With the passing last year of Sun drummer, D.J. Fontana, all members of the Elvis Presley & The Blue Moon Boys Band have gone on to a greater reward. Perhaps they have re-formed on higher ground.