Six years after Obama signed off on the nuclear sellout deal with Iran, diplomats are once again meeting with representatives of the Islamic terror in Vienna’s lavish Palais Saxe-Coburg. 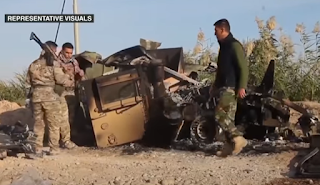 1,500 miles away from the white columns of the former palace turned five-star hotel, American forces are under fire once again. On January 3rd, two suicide drones were aimed at the State Department’s Baghdad Diplomatic Support Center near the Baghdad International Airport.

Two more terror drones targeted American forces deployed to fight ISIS at the Al Asad air base. The base has been repeatedly hammered by Iran-backed rocket attacks over the past year, most notably when 14 rockets struck the base over the summer causing several injuries.

While American forces were able to shoot down the terror drones, these latest acts of Iranian diplomacy came complete with the words “Soleimani’s revenge” scrawled on the drones. The latest Iranian attacks on Americans forces use Soleimani’s death as a pretext, but the attacks began before the Iranian terror boss was killed, and have sharply escalated under Biden in response to his appeasement of the Islamic terror regime.

There were repeated Iran-backed rocket strikes against Americans in Iraq throughout the last year totaling an estimated 25 separate attacks under the Biden administration.

These attacks have mostly gone unpunished.

While Iran and the media eagerly link the latest wave of Iranian attacks on American forces to the death of General Soleimani, they conveniently forget that the U.S. took him out in response to multiple attacks such as these, including the 2019 rocket attack that killed an American contractor and wounded four American servicemen, and the attempt by Iranian proxies to recreate Benghazi with an attack on our embassy in Baghdad.

After two straight days of drone and rocket attacks, the Biden administration finally authorized strikes at several launch sites in Syria that had been used to target American forces.

“We have to take that threat very seriously and we always have the right of self defense,” Pentagon spokesman John Kirby argued.

The right of self defense is a very low bar.

Iranian rocket attacks on Americans have escalated even as the Biden administration has tried to resume negotiations with the terror state and provided it with indirect sanctions relief.

While Iran has made much of the January attacks coinciding with the anniversary of Soleimani’s death, the most intense attacks of the Biden administration actually took place around the summer anniversary of the nuclear deal. The more recent sixth round of negotiations over restoring the deal had closed out in June. While the Biden administration remained convinced that it was on the verge of an agreement, Iran responded with its most severe attacks.

In the first full week of July, there was an attack targeting Americans nearly every single day.

But Iran’s terror proxies did not even wait for the negotiations to break off. There were 7 attacks throughout June before the Iran-backed terror campaign really picked up in July with 7 attacks in just the early weeks. While the wave of attacks faded as the negotiations did not immediately resume, the Islamic terror state did make a special exception for one day in September.

Then, as now, the Biden administration limited American military personnel to defensive preventative air strikes against the Shiite terror groups carrying out the attacks.

This strategy not only failed to stop the attacks, it has emboldened the Islamic terrorists.

While the Biden administration has provided Iran with billions in sanctions relief, a sufficient act of betrayal on its own, it seems to have little interest in expecting Iran to stop trying to kill Americans by either linking sanctions relief to an end to terror or refusing to negotiate under fire.

Americans meanwhile have little idea of just how pervasive and constant the Iranian attacks are.

The media does report on major attacks, but buries the reports on the back page. While many people are aware of the Vienna negotiations, far fewer have any idea that American military personnel are still deployed in Iraq to meet the ISIS threat or that they’re under fire from Iran.

Many Americans think of our conflict with Iran as political, when it’s actually military.

The reporting on the latest wave of Iran-backed attacks further distorts the bigger picture by emphasizing claims that they are linked to the anniversary of Soleimani’s death as if the terrorists hadn’t been doing the same thing throughout the previous year. And as if Soleimani hadn’t been a key player in organizing and funding these attacks before he was taken out.

The most striking contrast between the high-level American diplomats in Vienna and the low-level diplomats in Iraq is that the former chat up the Iranians while the latter are targeted by them. Iranian-backed attacks have been aimed not only at our military, but our diplomats.

The State Department isn’t just selling out America, it’s selling out its own people who are facing rocket and drone attacks by the terror regime that it’s unsuccessfully trying to crawl into bed with.

And the Biden administration is selling out America and Americans. Once again a Democrat administration has put military personnel in the line of fire and won’t let them fight back.