After the last of the old Senate Democrat Klansmen rode off into the sunset, it’s the turn of the longest serving former official of a racist hate group to throw his own retirement party. 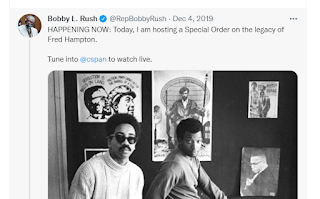 Rep. Bobby Rush, the former Deputy Minister of Defense for the Black Panthers, announced that he’s joining his fellow Democrats fleeing the sinking ship ahead of the midterms, not for political reasons mind you, but in order to spend more time with his grandchildren.

“I don’t want to be a historical figure to my grandchildren,” Rush said. That stands to reason considering his history.

Rush was recruited by Stokely Carmichael, a deranged bigot who would later describe Adolf Hitler as “the greatest white man”, to form a Black Panther chapter in Chicago.

“We plan to arm the total black community so when the pigs come down on us, we will be equal,” Rush once bragged. “We advocate offensive violence against the power structure… we are at war and the Minister of Defense must be in charge.”

As a House Democrat, Rush, suffering from criminal hypocrisy and a broken mirror, falsely claimed during the BLM riots that President Trump “wants to instigate a race war”.

A month after two police officers were murdered, the cops finally raided a Black Panther apartment where Fred Hampton, the chairman of the Chicago chapter, was holed up. This time around, the Panthers got the worst of the exchange. Rush, who had been there hours earlier, emerged at Jesse Jackson’s service, claiming that he had been marked for death by the cops.

“If I was out on the street, they would have shot me down,” he claimed.

(Unlike Hampton, who was the subject of a recent Hollywood hagiography, Judas and the Black Messiah, the two murdered officers, Patrolman Frank Gershon Rappaport and Patrolman John Gilhooly, one Jewish and one Irish, have not been lionized by Warner Bros and the Oscars.)

Rush went into politics, but never left behind his affinity for his racist hate group.

In 2019, Rush hosted a special on the “legacy of Fred Hampton” featuring a propaganda poster of Malcolm X next to Mao, and claims that the Black Panther was “murdered”. In 2021, he appeared at a black nationalist conspiracist forum that included a Black Panther who had admitted to pouring boiling water on a teenager who was being tortured and then murdered.

Say what you will about the Young Democrats, but they don’t train members to pour boiling water on people whom they suspect of being insufficiently loyal to the socialist cause. Yet.

The Mao portrait is no accident.

When Rush visited Cuba, he called his meeting with Castro, “like listening to an old friend.”

“In my household I told Castro he is known as the ultimate survivor,” he said.

Retiring from the House after three decades of blight and misery in the black community he claimed to represent even as he managed to pay his wife $550K for, among other things, consulting services, not to mention his brother, sister, and son, Rush is a mini-Castro.

Like his old Communist friend, Rush is the ultimate survivor and a revolutionary hypocrite.

“The Chicago Fraternal Order of Police is the most rabid, racist body of criminal lawlessness by police in the land. It stands shoulder to shoulder with the Ku Klux Klan then, and the Ku Klux Klan now,” Rush ranted during the BLM riots.

That same month, the former Black Panther official, complained that Chicago cops, the men he called the modern KKK, sat eating popcorn in his office instead of stopping Black Lives Matter rioters from looting his office.

“One was asleep on my couch in my campaign office,” Rush whined at a press conference.

Worse still, “they even had the unmitigated gall to go and make coffee for themselves and to pop popcorn, my popcorn, in my microwave while looters were tearing apart businesses within sight and within their reach.”

And most horrifying of all, the popcorn they were eating was almost certainly white.

It’s tragic when the KKK won’t lift a finger to stop racist thugs who view his Black Panthers as role models from looting their former Deputy Defense Minister’s office. Where’s the respect?

Rep. Rush had schizophrenically pivoted from claiming that police efforts to stop the BLM riot in D.C., “reminded me of 1968, when the police were as responsible for the rioting,” to complaining that the police were eating popcorn instead of cracking BLM heads outside his offices.

But the former Black Panther leader has never let consistency get him down.

As a Deputy Minister of Defense, he was busted on gun charges. He named his son Huey, after the Black Panther leader, Huey P. Newton, only to see his son follow in Newton’s footsteps by getting shot and killed during an argument over drugs.

And then Rep. Rush began campaigning for gun control. He might have done better to give his son a different role model. Or perhaps dissuade him from going down the path that led him to becoming the target of a druglord named “Ball” who wanted $110,000 in cocaine from Huey.

Huey P. Newton, the original Huey and Minister of Defense for the Panthers, was shot and killed by a member of the Black Guerrilla Family during an argument over a cocaine deal.

The former Deputy Minister of Defense who had advocated, “we need to arm ourselves”, and had served time on gun charges, blamed not his son or his decision to use the Black Panther thug as a role model for him, or even drugs, but the firearms that were used in the argument.

“Ultimately, I would like to see the manufacture and possession of handguns banned,” Rush declared.

If Rush can’t manage to dynastically hand over his seat to his son Flynn Rush, a failed candidate who was paid by his father’s campaign, he’ll at least be able to spend more time doing interviews about the glory days in a violent hate group. Back then reporters would line up at Bobby Lee’s press conferences as the bespectacled nerd held forth surrounded by thugs.

The Black Panther minister may be leaving, but his rise is a measure of just how much the Democrat party that made him its elder statesman has become an extremist hate group.