Mine was living in Australia all along. 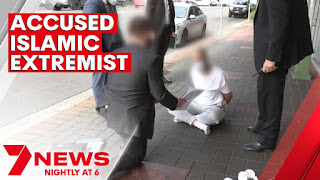 I had spent the time since the attacks of September 11 writing about the dangers of Islamic terrorism. But somewhere in a suburb of Sydney, Australia, another Daniel Greenfield had decided to convert to Islam. One thing led to another and before anyone knew it, he had become a fan of ISIS and was arrested with police alleging he’d been planning an attack.

The Aussie ISIS version of Daniel Greenfield is younger and balder than yours truly. When arrested, he was wearing Nike sweatpants, and the Daniel Greenfield you’re reading now would be as likely to wear anything with the Nike logo as he would be to convert to Islam and join ISIS.

Nevertheless, when Australian media and bloggers began doing rapid web searches for Islamic terrorism and Daniel Greenfield, they came up with the ten thousand articles, posts, tweets, and videos that I had been assembling since back when Australia still had freedom of speech.

The confusion was understandable. One of us was an Islam critic and the other an Islamic terrorist. Both of us, according to official dogma, had misunderstood the entirely peaceful theology of Mohammed, and therefore journalists felt free to contact me, eager to help me tell “my side of the story” about why I had plotted a terrorist attack against law enforcement.

None of this stopped clickbait sites from embedding my tweets and articles in stories about the other Daniel Greenfield. It seemed to have escaped their attention that those tweets and articles about ISIS were not in favor of the Islamic terrorist group. Even assuming that no one in Australia knows who John Kerry is (an ignorance which can only inspire a profound envy), how exactly does an article titled, “Arrest Kerry for Collusion With Islamic Terror States” lead one to the conclusion that its author thinks that Islamic terror states are a very good thing.

While this Daniel Greenfield had never met his Islamic doppelganger, I could tell journalists inquiring that I knew all about him because his story is almost tiresomely familiar.

Daniel Greenfield, the one with all the ISIS materials and the knives, converted to Islam, came to the attention of the local authorities, and was diverted into a “deradicalization” program which true to form accomplished nothing except to possibly make him even more bent on violence.

For the last 5 years or so, Greenfield or Al-Greenfield allegedly continued to cheer for ISIS instead of Sydney FC. The police arrested him on Christmas Eve, an unusual time, but one that raises the possibility that he had been planning an imminent attack to coincide with Christmas celebrations. That sort of thing is favored by Islamic terrorists operating in Christian countries.

Local reports (the ones that don’t confuse me and him) allege that Daniel Greenfield claimed to be a member of ISIS. That would mean that he swore a Bayat, an oath of fealty, to whoever is still alive in the ISIS leadership. If he got in early enough on the ground floor, he might have even managed to swear an oath to Caliph Abu Bakr al-Baghdadi, a nerdy bearded cosplaying serial rapist, who blew himself up while trying to escape a dog named after retired talk show host Conan O’Brien. (Conan, the dog was alright, Conan O’Brien’s career has been better)

But it all goes to show that, like Conan and Conan O’Brien, or Daniel Greenfield and Daniel Greenfield, we all have unexpected doppelgangers out there. Some better than us and others worse than us. Some have things to teach us while others tell us what we already know.

The tale of the two Daniel Greenfields is a story of the doppler effect of Islamic terrorism passing around the world, transcending oceans and national boundaries, rallying some to oppose it and others to join in it. While I warned about the danger of Islamic terrorism, the other Daniel Greenfield allegedly promoted beheading and suicide bombing videos on social media.

These lost twins remind us not to take the choices that made us who we are for granted.

Perhaps life itself requires balance, so that for every Daniel Greenfield who opposes ISIS, another Daniel Greenfield must join it. Or, more likely, such things are meaningless coincidences. But meaningless or meaningful, the ISIS Greenfield did succeed in carrying out at least one successful terrorist attack, felt not so much in Australia, but in America.

Search for terrorism and my name, and his name will be the likeliest to come up. Over a decade and a half of writing about Islamic terrorism is all too easy to eclipse with one failed terror plot. The familiar moral of the story is that it’s difficult to create, but all too easy to destroy. As Daniel Greenfield, the one who joined ISIS and wears Nike sweatpants, works his way through the system, our names will be tangled together in the twisted infrastructure of the internet.

Apologists like to say that Islamic terrorists are driven to their crimes and while I generally tend to dismiss such asinine excuses, in this case there may be something to it. Imagine that you convert, yet whenever anyone at your mosque searches for your name, they come up with the less than pleasant remarks about Islam written by your American doppleganger.

Naturally they suspect you of being an un-Islamic plant, a spy, and an undercover operative.

How else can you possibly prove them wrong except by joining ISIS and then showing your sincere commitment by promoting the terror group and then plotting a terrorist attack.

If my doppelganger across the ocean accomplished nothing else, he distinguished his position on Islam from mine. No one is likely to confuse the two of us now, he must have thought. Instead the winds of confusion are blowing the other way with Daniel Greenfield being identified with a man whom the Sydney Morning Herald dubs the “aspiring jihadist Daniel Greenfield.”

Now when an Australian accent next wakes me up at two in the morning to ask about my involvement in a terror plot, at least I’ll have some dim inkling of what he’s talking about.

Before I hang up on him anyway.