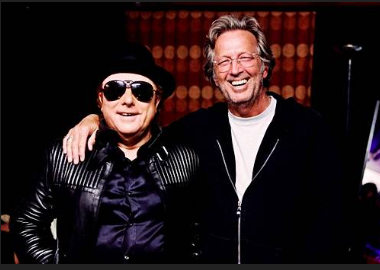 “The 45 Club,” is a term that I use to partly counter the self destructive term “The 27 Club.” Instead of an endless conversation about all the musicians that flamed out at the age of 27, The 45 Club is my playful nod and specific acknowledgement of two Rock music legends, Eric Clapton & Van Morrison. Both were born in 1945, both are now 76 years old.

While most of the contemporaries of Morrison and Clapton are having their biographies ghost written or are recycling their greatest hits on the road, Van and Eric are doing something vastly different: They are protesting.

What Morrison & Clapton are protesting are the mask and vaccine mandates in the midst of our alleged world viral crisis. Morrison and Clapton have had enough and are raising their voices in song. They have both come to the conclusion that mandates are not a safety issue, but a control issue. Whether an international touring musician or a musician at your local bar, mandates have disrupted the careers of many working musicians.

Protest in song is an old tradition. As a form it goes all the way back to Medieval times. Clapton and Morrison are utilizing an old tradition to address a new tyranny. As a musician, fan, activist and ornery old man in training, I applaud their efforts to address the hypocrisy and stupidity of viral mandates.

Previously, with a few exceptions on Van’s part, Clapton and Morrison have not had a major public career as political pundits. That includes their general public statements or as a reference within the subject matter of their music. Clapton is better known as one of the major architects of Blues-Rock Guitar starting in the 1960s. He is also a convincing singer and songwriter. More importantly to humanity, he is a champion of sober living who established the Crossroads Treatment Center in Antigua.

For me, Van Morrison is a combination of Poet and R&B/Soul Singer. His voice is immediately recognizable. Morrison is a singer for the ages who draws on diverse musical influences such as Blues, Jazz, R&B, Country, Rock and traditional Irish Folk music, among his many musical influences. I find Van’s music and lyrics to be transcendent, inspiring and comforting. His music reflects the best parts of the soundtrack for the human spirit.

In decades past, both Clapton and Van Morrison have been called geniuses by the liberal music press and some fans with stars in their eyes. Van has been lauded as a mystic poet with albums like “Astral Weeks.” In the mid-1960’s, a misguided group of fans were writing “Clapton is God” as graffiti on the walls of buildings in and around London, because of Clapton’s prowess with the guitar. With a few youthful exceptions neither one of them has demonstrated an excess amount of ego, despite the continued praise of press and fans throughout their careers.

In September 2020, the music trade magazines made an announcement that Van Morrison would be releasing a series of anti-lockdown songs. Included in the series were the songs “Born to Be Free, As I Walked Out and No More Lockdown.” These songs are protests against lockdowns and mandates. This music of Van’s reminded me of some of the work of Mose Allison and John Lee Hooker. A music with a direct passion and a direct message. Admirably, some of the profits from these anti-lockdown songs have been used to assist musicians who have been directly affected by the viral crisis.

Both Van Morrison and Eric Clapton have faced public recrimination for their anti-mandate music. The recriminations that they have faced disturbs me. These criticisms demonstrate directly that the liberal music press is exactly like the liberal mainstream press: One sided and agenda driven.

As a performer, if you interrupt their safe space and go outside of what is expected of you, the liberal music press behaves like teased wolverines. In turn, some of their fans who expect a repetition of the previous works of Clapton and Morrison, are throwing their two uninformed cents into the fray. Additionally, some of the pair’s contemporaries have also tossed their opinion in.

One of the songs that is getting a lot of unnatural criticism is a song written by Van Morrison and performed by Clapton titled “Stand and Deliver,” released in December 2020. I really like this song, with that distinctive Clapton guitar tone and pointed lyrics by Morrison. Yet, some listeners have objected to these following lines:

A contemporary of Clapton’s, Blues and Soul musician Robert Cray, has publicly voiced his displeasure over this lyric. When Robert Cray first became known, in the mid-1980’s, Eric Clapton was one of the first supporters and champions of his music. Clapton covered some of Cray’s songs, they collaborated on music together, (The song “Old Love,” specifically comes to mind) and they toured extensively together.

Now, because of the aforementioned lyric and Clapton’s anti-lockdown and anti-vaccine mandate stance, Cray has formally withdrawn from the upcoming tour. After an email announcing his formal departure from the upcoming Clapton tour, he has cut off all contact with Clapton. Perhaps Cray is seeking publicity. Many musicians would love to tour with Eric Clapton.

On a side note: If Robert Cray is offended by the term slavery, perhaps he should consider all historical definitions. From Africa to the Antebellum American South to the modern day sex slave industry, slavery of people is always unacceptable. What Morrison and Clapton are communicating in “Stand and Deliver” is slavery to an ideology. Perhaps Robert Cray, to quote another older lyric, should “free his mind and the rest will follow.”

Clapton comes to his anti-vaccine stance directly from experience. In February 2021, Eric Clapton, for reasons specifically known to him, received the AstraZeneca Jab and about six weeks later he received the second jab. My theory behind Clapton’s compliance had to do with the fact that he has residences in at least three countries. Perhaps, he was complying to have unfettered access to travel?

His reaction to the AZ jab was painful and almost disastrous. He described his reaction as follows:

“I took the first jab and straight away had severe reactions that lasted 10 days, I recovered eventually and was told it would be 12 weeks before the second one…” Clapton wrote this in a note to friend and Italian Architect, Robin Monotti Graziadei. Graziadei shares a lot of the anti-mandate views of Clapton and Morrison.

“About six weeks later I was offered and took the second AZ shot, but with a little more knowledge of the dangers,” he continued. “Needless to say the reactions were disastrous, my hands and feet were either frozen, numb or burning, and pretty much useless for two weeks, I feared I would never play again, (I suffer with peripheral neuropathy and should have never gone near the needle.) But the propaganda said the vaccine was safe for everyone…”

Clapton’s anti-mandate stance has lead to a resurfacing of alleged racist and xenophobic remarks, which he made while drunk and high at a concert in Birmingham UK in 1976. Leave it to the liberal press to raise the mistakes, in this case reporting something that happened 45 years ago as current news. The press is uniformly pathetic and hypocritical in their reporting. They rarely/never address their own mistakes or the variances they apply to the truth.

Van Morrison made a poignant statement recently when he tweeted the following: “Remember those who are shutting down our economy haven’t missed a paycheck since lockdown began. We are not in this together.”

Clapton recently wrote and articulated his own feelings.

“I’ve been a rebel all my life, against tyranny and arrogant authority, which is what we have now, but I also crave fellowship, compassion and love, and that I find here,” Clapton wrote. “I believe with these things we can prevail.”

Clapton & Morrison, despite uninformed criticisms, continue to prevail and protest. In performance, they collaborated recently on a song by Morrison, “Where Have All the Rebels Gone?” This song laments those who wait for “someone else to make a move.” In addition, to their collaboration, Morrison has released his own version of this song on his recent work,“Latest Record Project, Volume 1.”

Additionally, in performance, the pair have collaborated on a Clapton song, “This Has Got to Stop.” This song addresses the hypocrisy of the mandates and Clapton’s unfortunate experience with the AZ Jab. The right to disagree with sheeplike behavior is the right of everyone, as is the right to individual refusal.

Why is only one liberal opinion the only one acceptable? Clapton & Morrison should be lauded for standing up to mandate tyranny and the viral hypocrisy of the liberal left. I believe with an intelligent form of  rebellion and an adherence to truth, we can all prevail against the insipid madness of the tyrants and the tyrannical. But only if we so demonstrate an active moral courage in our continued behaviors. We all should stand and deliver and protest. Our societal prison is the one made by our own complacency.