When the Supreme Court took on its latest abortion case, Justice Sonia Sotomayor denied that babies in the womb feel pain.

“There are spontaneous acts by dead-brained people. So I don’t think that a response by a fetus necessarily proves that there’s a sensation of pain or that there’s consciousness,” the ‘Wise Latina’ coldly contended. 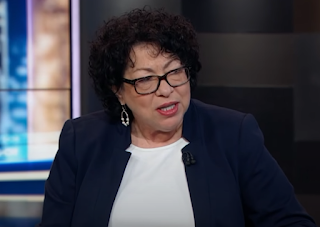 Sotomayor’s denial that a baby feels pain was in sharp contrast to her passionate conviction that murderers who kill children experience pain as they receive the death penalty.

A few years ago, when Billy Ray Irick’s case came before the Supreme Court, Sotomayor was his biggest fan. Irick had beaten, raped, and murdered a 7-year-old girl, but Sotomayor furiously fought for him.

“If the law permits this execution to go forward in spite of the horrific final minutes that Irick may well experience, then we have stopped being a civilized nation and accepted barbarism,” she ranted.

What is barbarism anyway? Is it murdering a child in the womb or putting down a child killer?

Much of the political and moral capital of the Democrats has been dedicated to arguing that murdering children is a form of liberation, but that executing murderers is barbarism.

The beginning and end of life remain a mystery. We cannot truly know what a baby feels in the womb or what a dying man experiences in the last moments of existence. There are anecdotal stories, scientific speculation and received religious wisdom, but in the end we cannot know.

All we can do is believe, identify, and empathize. And these qualities define our souls.

Sotomayor is, despite her position, no intellectual or legal scholar. Misstating “brain dead” as “dead brained” is a little too on the nose considering her borderline illiteracy and ignorance.

Often described as a “bully”, Sotomayor’s legal philosophy, such as it is, is defined by emotive berating and ad hominem attacks. Like most postmodern leftists, her arguments are usually reducible to accepting or rejecting someone’s pain based on their degree of oppression.

In her defense of affirmative action, Sotomayor argued that the trauma of racial alienation was so crippling that equal rights had to be overturned in favor of racial privileges for some.

“Race matters because of the slights, the snickers, the silent judgments that reinforce that most crippling of thoughts: ‘I do not belong here'”, she whined, invoking her own emotional pain.

As usual, Sotomayor was speaking about herself. Even after her nomination, she complained that she felt like she didn’t belong on the Court. Years later, borrowing the same false accusations of racism and discrimination that had powered her career, she would complain about her place on the Court, “Will I ever quite feel that I have their same background, their same understanding of the world that I operate on? Not really.”

That sense of alienation, as emotionally compelling to Sotomayor as it is to a goth teen at Hot Topic, may be detached from the reality that makes her one of the most powerful women in the country, but it feels real. In the postmodern verbiage of the Safe Space Left, it’s “her truth”.

Sotomayor’s truth, like that of many lefties, leads her to closely identify with the suffering of a monster who raped and murdered a 7-year-old girl, while refusing to identify with the pain of a baby in the womb. Parenthood may make Justice Amy Coney Barrett more likely than Sotomayor, who has no children, to be moved by the pain of a child. And perhaps Sotomayor can more convincingly imagine herself terminating the life of a child than bringing him to term.

But justice should be driven by the law, not feelings. Whether or not a person has rights should not be a matter of being able to empathize with their humanity in order to protect their existence.

And yet leftist moral politics insists on exactly this sort of zero sum game of victimhood.

“Conservatives want you to think that a fetus – a fetus who is pre-viability, which means it cannot exist outside of its mother, it cannot live outside of, of the womb, has the same – should have the same legal rights as full-grown black people in this country,” The Nation‘s Elie Mystal ranted to Joy Reid on MSNBC.

Mystal and Reid could not exist on their own outside the nurturing womb of affirmative action, but that doesn’t mean that they don’t have the right to exist.

Even though abortion disproportionately affects black babies, Mystal argues that there’s something racist in caring about the lives of babies. The zero sum game of intersectionality is all about dictating whose rights come first and to what degree. Much like affirmative action, intersectionality has reduced civil rights to a competition not for equality, but for priority.

When leftists reject the universality of the Constitution’s rights, it’s because like Mystal, the justice correspondent for a radical magazine, they don’t believe in universal rights. They demand power for their own group and for those “allies” they can empathize with.

Empathy to them, as to Sotomayor, equates to alienation, to the discord between the inner and the outer selves, the sense of external judgement and internal ego that equates to guilt.

That’s why leftists so easily relate to the criminals, the guiltiest of them all, and are unable to relate to babies, the most innocent of them all. In a morality that is based on overturning power, the worst become the best and the best become the worst. If guilt, as criminal justice reformers and the 1619 Project contend, is really innocence of oppression, then innocence must be guilt.

And babies, who just want to live, are the guiltiest, most racist, and oppressive of them all.

“I would hope that a wise Latina woman with the richness of her experiences would more often than not reach a better conclusion than a white male who hasn’t lived that life,” Sonia Sotomayor had infamously argued.

Now we see what Sotomayor’s better conclusions look like. And they’re absolutely horrifying.

The “richness” of experience, somehow accessible to Sotomayor, but not to anyone of any other gender, ethnicity, or race (especially white men) hasn’t led her to justice, but to injustice.

In defending the case of a contract killer facing the death penalty, Sotomayor falsely claimed that lethal injection “may turn out to be our most cruel experiment yet”. In the Irick child murderer case, she raved that, “the State of Tennessee is on the verge of inflicting several minutes of torturous pain on an inmate in its custody.”

She speculated that the child rapist and killer may experience “sensations of suffocation and of burning that ‘may well be the chemical equivalent of being burned at the stake.’”

Sotomayor is consumed with the moments of pain that she imagines killers will experience.

During abortion, a suction tube pulls the baby apart or he is dismembered piece by piece with the skull finally crushed, and the parts sold off for medical experiments. What “sensations” does that produce in a baby who, according to pro-abortion activists, can be killed right up to birth?

Sotomayor, who can speak about the pain of alienation or the suffering of a child killer, has no interest in envisioning the suffering of a baby being torn apart piece by piece. Against scientific findings, she insists that there’s no evidence that babies can really feel pain. At least nothing as intense as the pain caused by the alienation of feeling like she doesn’t belong on the Court.

Executing a child killer, she has argued, would mean “we have stopped being a civilized nation and accepted barbarism”. What does it mean that we spend decades wrangling over the life of a child killer while dismissing the annual mass murder of babies as the price of social justice?

At the heart of this debate, as with so many others, is the question of what barbarism and civilization really mean. Sotomayor has laid out her definition. It should not be dismissed lightly since it is a pagan idea that some among the ancient Greeks would have argued even better.

If we do not assert our own moral civilizational vision, we will continue to descend into a barbaric leftist society that insists it is civilized because it kills babies and spares killers.

The Incarnation of Jesus

Schumer, Who Accused Trump of Russia Collusion, is Getting Paid by Putin