The end of the Obama era renewed the civil war between the Democrat establishment and the Socialist insurgents. Hillary Clinton, the establishment woman whose loss to Obama had inaugurated 8 years of insurgent rule, faced down a new challenge from the Sanders insurgency. 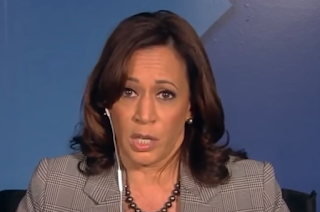 The next round of the fight in 2020 was a virtual draw with black voters choosing Biden and white lefties backing Bernie Sanders and Elizabeth Warren. The Biden administration was a compromise between both wings of the party. Its senior members are establishment while many of their juniors are Warren allies or linked to the Congressional Black Caucus.

Biden was a useful compromise candidate because his age and mental condition made him a “one-and-done” politician whose administration would take the hit by implementing radical policies and coping with the political fallout from the pandemic and runaway inflation.

Except that Biden, who keeps promising to run again, doesn’t seem to know it.

The only member of his administration who is even more clueless than Joe is Kamala. The compromise that put her in the White House was the most misguided one of them all.

Biden had promised the Congressional Black Caucus a black female veep. The CBC wanted one of its own, particularly Rep. Karen Bass, but considering her Castro sympathies and general leftist radicalism, that would have meant writing off Florida and the rest of America.

Instead, Biden, in his only clever move, picked Kamala, a failed primary opponent, not because she was popular, but because she was unpopular. Rather than an affirmation, Biden went over the protests of his own people to select a political human shield. The party of identity politics would never pressure him to step down to make way for this particular “black woman”.

On the political chessboard, Kamala functioned as Biden’s incompetent queen. Her unpopularity protected Biden from any political pressure to step down, but also blocked potential opponents from trying to replace him. When Buttigieg’s efforts to build a platform for a presidential run inside the White House became too public, Kamala brought out the race card.

Kamala was too unpopular to run and too rich with identity politics to be cut out of the race.

Picking Kamala was a brilliant move for Biden. Not so much for Kamala. The mediocre political hack, rapidly elevated to the Senate and then the Veepdom, has little experience in D.C., few political skills, and is incapable of even running any kind of basic organization. The same qualities that wrecked her presidential campaign also devastated her vice presidency.

After her campaign collapsed into feuding between her staff and her sister, history is repeating itself. And once again Kamala can’t decide if she wants to be a radical or a moderate, and is trying to be all things to all people. Like her campaign flip-flopping on socialized medicine, she veers between open borders and immigration enforcement rhetoric, between demonizing Israel and conducting outreach to Jews, without being able to pick a platform and stick with it. 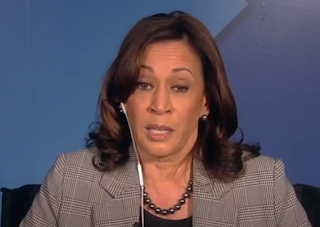 Kamala Harris is far from the only Washington D.C. politician who doesn’t believe in anything, but it’s her inconsistency that makes her appear phony and insincere even to her own people. Her opportunism has always been too blatant to conceal under fake idealism, even more transparently artificial identity politics, or a truly implausible “ordinary woman” facade.

That’s the Hillary problem. And the establishment already made two bad bets on Hillary.

In a party deeply divided between radicals and establishment types, Kamala tried and failed to win the support of both, but is coming away with the support of neither. No one likes her and no one trusts her. And the campaign to undermine her is being waged subtly, but effectively.

Kamala’s top people are leaving because everyone in D.C. understands that she doesn’t have a future. Staffers work for politicians whom they expect will be able to advance their careers. It’s become obvious even among the third and fourth tier people around Kamala that she isn’t going anywhere. And no one with any ambition is likely to stick around and follow her off to the exit.

No longer a senator and a veep no one wants to see in the big chair, she has nowhere to go.

2024 Democrat candidates are making it plain that they don’t see either Biden or Kamala as political threats. In what other administration could a cabinet member like Buttigieg keep his own PAC going for a potential future presidential run against his own boss and Kamala?

Buttigieg isn’t the only Democrat aiming at 2024. Senator Cory Booker is going to New Hampshire. Senator Bernie Sanders says that there’s only a “slim” chance he’ll run, but Nina Turner, his campaign co-chair, declared that, “If President Joe Biden does not seek reelection for whatever reason, that makes this a totally open seat. Period,”

As a black woman, Turner is immune to Kamala’s race card even while warning that the Sanders camp will not respect any kind of incumbency by Kamala. That’s not a coincidence.

Both sides expect 2024 to reopen the Democrat civil war. Buttigieg is positioning himself as the establishment candidate and even if the Sanders camp doesn’t run their figurehead, they will likely turn up another candidate to build a completely unearned cult of personality around.

Where does that leave Kamala? Just like in the primaries, nowhere.

Too clueless to realize that her plum job was really a put-up job, Kamala has finally reached the pinnacle of her profession only to discover that it’s really a dead end. If the country continues to be an economic and medical mess, the last thing anyone will want is Biden or his political prop. 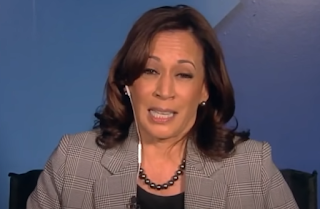 But skin deep differences are how voters get scammed by the same political hacks.

Kamala’s problem is that her scam was uninspiring, her invocations of victimhood unconvincing, and her brand was inauthentic. Leftists hate her because she’s phony and the establishment doesn’t want another Hillary. The Congressional Black Caucus resents her because of her covert campaign against Rep. Karen Bass. Her only allies in D.C. are on her payroll.

And that’s not a good place to be.

Kamala thought she was boarding an elevator to the White House, but instead she’s a puppet in the middle of a civil war that she is uniquely incapable of participating in, let alone winning.

Kamala Harris thought she was a queen, now she’s realizing that she’s only a pawn.