China’s one-child policy suppressed the birth rate with forced abortions and political terror for a generation. Only allowed one child, many Chinese families chose to abort their baby girls.

The deficit of 40 million female babies is now the specter stalking Communist China. 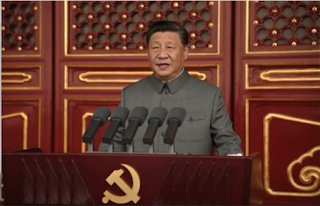 China’s aggressive military moves against Taiwan and India are a desperate gambit by a corrupt Communist elite facing domestic social instability and millions of men who can never marry.

But while the focus has been on too many Chinese men, it’s the too few women whom the regime is starting to fear. The Communist society is being forced to reckon with the social problem of supply and demand in the marriage market. Women, formerly despised, are now in the driver’s seat, with the bride’s family demanding tens of thousands from prospective grooms.

That price is putting marriage out of reach for a whole other category of poorer men.

But what really has the Communist elite worried is not the high price of marriage, but the growing number of professional women who aren’t interested in getting married at all.

And many of those who do are getting divorced, leading the regime to impose a 30-day cooling off period after there were more divorces than marriages recorded in China in 2019.

The big question for Communist leaders was whether they could defeat the West economically without becoming so much like it that they would have to adopt its society and its politics. The fall of the Soviet Union was a cautionary tale about the dangers of western liberalization. And China appeared to have avoided the pitfall, suppressing its democracy movement and maintaining a Communist oligarchy even as it outperformed America in the marketplace.

But Xi and the Communist leadership fear that they just delayed the inevitable. China is seemingly more powerful than ever, its people are nationalistic, Hong Kong has been consolidated, and Taiwan is expected to follow, making One China into a reality.

And yet the Communist leadership shows every sign of panicking, cracking down on entertainment and tech companies, and purging its own oligarchy on a monthly basis.

Despite the outward allegiance to Xi and the Communists, the country’s rising middle class is westernized, individualistic rather than collectivist, intent on having fun and stocking up on all the latest consumer gadgets, instead of sacrificing and laboring in the cause of Communism.

The falling marriage and birth rates are the obvious symptom of China’s new social feminism.

Marriage licenses have fallen to a 13-year low and the birth rate has hit a 43-year low. With only 12 million babies born in 2020, the old mathematical joke about the Marching Chinese now falls flat. Like the rest of Asia, China is aging, and its workforce is falling by 0.5% a year.

China’s 1.3 birth rate looks worse than those of America or Europe, but unlike them, the Chinese birth rate isn’t being artificially inflated with a huge population of immigrants.

While the Communist leadership has tried to apply economic fixes to a social problem, a recent survey in one rural area found that only 60% of young women wanted to get married while 82% of men did. The combination of an aspiring professional female workforce with the sex-selective abortion caused by the one-child policy has made China’s gender relations uniquely horrible.

In America, as in most first world countries, women are more interested in marriage than men. The reversal of the gender stereotype in China is a tribute to how the country’s toxic mixture of traditionalism, Communism, and consumerism is playing out in its dysfunctional society.

Communist China made marriage and child-bearing into a political duty. The rising affluent middle class that navigated the suicidal peaks of exams, pursue shallow escapism and luxury goods in the off hours from their stressful office jobs, and have little interest in children.

The Communist regime is taking notice. In typical leftist fashion, it’s fighting the problem as an ideological threat, arresting feminists and banning the 6B4T keyword, a South Korean feminist movement that urges women not to marry and to avoid conventional beauty standards.

But China’s problem is coming less from the traditional activist woke feminism, which the regime will have little trouble stamping out, but the larger economic shift in gender roles.

52.5 percent of students in Chinese colleges and universities are female. That’s not quite as extreme as the 60/40 split in the United States or the even more extreme gender gaps in some European countries, but in a decade or two, China may catch up to us there as well.

Religion may be declining in America and Europe, but the Communists had done their best to stamp out faith in China and replace it with party loyalty. And then it replaced starving rural labor with mega-cities and mega-buildings filled with office drones who have no meaning or purpose in life beyond purchasing the latest iPhone, listening to the latest hit or watching the latest show.

The single career women who have redefined the culture and politics of America and Europe are on the rise in China. In interviews they express a disinterest in marriage and family. They enjoy focusing on themselves, shopping, socializing and traveling with little interest in the future of their country or their society. They seek no meaning beyond the luxuries and comforts of life.

And the marketplace in China, much like in America and Europe, caters to them as a cultural and economic force because of their spending power and role as social media influencers.

China’s entertainment landscape is filled with shows that are culturally, rather than politically, feminist. The Romance of Tiger and Rose, with some 900 million views, features a matriarchal society where men are not allowed to study or work, and are cursed when boys are born. The joke here is not just a reversal of China’s past, but a possible preview of its demographic future.

Had China retained its former society, the growing economic value of girls would have led to a reverse gender gap, but the growing shift from rural subsistence farming to the urban office workers of the middle class means that the gender gap is being overshadowed by falling birth rates. The new society spends less time calculating the price and profit of marrying off children and worries about the imminent disruptions of a child on a young urban couple’s quality of life.

China, despite its Communist hierarchy and total control of the economy and society, is caught in the same conjoined cultural and economic trap as the first world. On the verge of realizing its aspirations to becoming a first world power, China is stuck reliving the price that Japan, the last Asian country to try and become a military and then economic superpower, paid for its wish.

The Cold Warriors of the eighties were wrong in believing that economic success was impossible without freedom and democracy. But they were generally right in believing that any country that wanted to economically defeat us would have to become us. They just failed to properly understand what becoming “us” really meant. It’s not democracy or freedom.

America, like its other first world counterparts, is becoming less free, and more political. When people say that our politics is downstream of our culture, what it really means is that much of our politics is about a culture rationalizing the way that it wants to live. The abandonment of religion, family, character, and all traditional values, is not just a Marxist conspiracy, it’s the self-indulgent behavior of overgrown children who decided that they never want to grow up.

In the Communist heartland, under a Marxist system built to reinforce the opposite qualities, a surprisingly similar revolution is taking place. The Communist regime, which believed it had total control over the lives of its people, has gone from mandating abortions to offering families the opportunity to have three children. The labor force is shrinking, the marriage and birth rates are falling, and the Xi regime can’t figure out how to turn back the clock and preserve its power.

Communist China’s history is one of grandiose planned efforts that blew up in the party’s face. One of its worst famines occurred when Mao decided to have the populace wipe out all the sparrows, leading to an infestation of insects that the sparrows had kept in check. Such subtle checks and balances pervade the natural world and human society, but the Marxist view of the universe is incapable of taking into account the complex and paradoxical nature of reality.

Mao’s inability to grasp the nature of the sparrow, the imminent obstacle in the ecosystem, is nothing compared to the inability of his successors to understand the relationships of men and women. Human nature, always elusive to ideologues, has brought down every Communist plan for world domination before, not through force of arms, but the hubris of its miscalculations.

Xi believes that China’s Communist regime is different even as demographics are undoing his mandate of heaven. While this century has been heralded as belonging to China, studies suggest that China’s population will drop by 50% by 2100. While 732 million may be nothing to sneer at, much of that will consist of its rapidly aging elderly population.

By 2050, 336 million Chinese elderly will form a bloc larger than that of the United States. If the birth and marriage rates keep dropping, a Communist gerontocracy will preside over failing dams, mega-cities, and a shrinking empire of senior citizens and single career women as the “barbarians” in the Muslim hinterlands with stronger birth rates sweep in.

Communism claimed to be able to harness history, but history always has the last laugh.