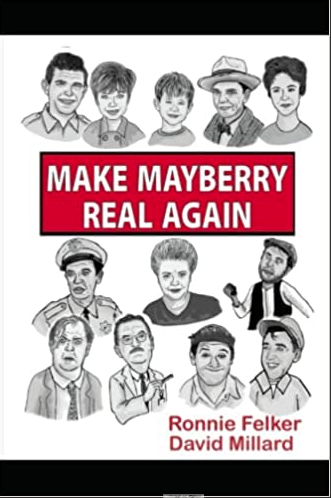 Having been raised in both a city (population 500,000) and a small town (700) I learned the advantages of both. As I get older I find I miss the small town more and it helps explain why The Andy Griffith Show is considered one of the most popular of the 1960s and is still loved by millions in syndication today.

It isn’t just because of Andy Griffith himself, outstanding actor that he was, or an outstanding cast. The real star was the town of Mayberry, modeled in part on Mt. Airy, North Carolina, the home town Andy Griffith grew up in. I have been to that community many times, the first ten years before the show was on TV. The first person I got to know in that community was a former student of Griffith’s and at that time he was best known for his recorded comedy routines. It was the writers who created Mayberry as guided by the star himself.

Mayberry is more a state of mind than a real location. It is where everyone knows everyone and their past. Great locations like the barber ship where people would gather and visit. And as a side note, here is something that might surprise Star Trek fans. In the Trek episode “The City On The Edge of Forever,” there is a scene where star ship Captain Kirk (portrayed by William Shatner) and guest star Joan Collins stroll by that very Floyd’s Barber Shop. There is a pharmacy where “the best sodas ever” can be bought. Added beauty are front porches where you would be invited by the residents to “come and sit a spell.”

The town is family and this has been beautifully captured in a book of poetry, Make Mayberry Real Again, by Ronnie Felker with added poetry by David Millard. Ronnie Felker and his wife really know this town and the show itself as you will see revealed in his writing as well as the art work. There are also a number of pictures, as there are a multitude of people who have worked to make Mayberry real. You will find everything from a well-organized Andy Griffith museum to a number of people acting as lookalikes for the show’s main characters. That even includes eating places, Wally’s Gas Station, and of course Floyd’s Barber Shop.

The Felkers have created a real ministry used in churches based upon two of the most loved characters. In 2007 Ronnie performed at their home church as Barney Fife for the first time. This changed his life forever in a very positive way. It went over very well and he was asked to perform again. This time he performed in the full regalia Barney was noted for. He became hooked on being a performer as Barney Fife (which is professionally known as a Tribute Artist). In Ronnie’s second performance he had wife, Elease, help him with a skit as Barney’s girlfriend ‘Thelma Lou’, and she has has been a Thelma Lou Tribute Artist ever since. The couple retired from the grocery business and now spend full-time entertaining at churches and special events throughout the South. It has become Fearless Fife Ministries and their theme verse is 2 Timothy Chapter 1:7, “For God hath not given us the spirit of fear but of power and of love and of a sound mind.”

Ronnie was moved to write this book largely due to the demand that grew after some of his poems appeared on Facebook. His book comes at a time when our nation is so divided by hatred, giving readers a slice of what Heaven may be like. There are stories in each poem using characters from the show, much like a blueprint of what seems to be missing in so much of our society today. There is humor, too, and you will know that both poets involved have captured the sense of what life would be like if we lived in Mayberry. It be nice if maybe this could create an urgency, whether in a small town or city, to make Mayberry real where we live.

Ann-Marie Murrell: The Kindness of Christmas in East Texas