As the the king sang in the musical, The King And I, “Is A Puzzlement.” The puzzlement is that back in the ‘50s and 60’s most of us were fortunate if we had three viewable television channels. With those three however there was a wealth of good shows to pick from and enjoy. Now with new technology we have hundreds of channels but not many with a high quality of entertainment. Yes, there are some good shows to pick from. What is interesting is the number of channels that are very successful largely due to running old shows in syndication. There is an avid fandom of viewers who have no problem watching over and over favorites like M.A.S.H., Star Trek, a myriad of Westerns and others what were our fare in the fifties and sixties.

One very special show from the 1960s was Family Affair. If there ever could be what would be considered a patron saint of a show it would be one of its most popular stars, Kathy Garver.

Kathy Garver is truly a Renaissance woman, being an actress, producer, director, guest artist for school drama classes, prize winning audio book and voice over star. She also has an amazing record as an author and that has been responsible for helping keep Family Affair in our consciousness. Among her books are X Child Stars, Surviving Cissy, The Family Affair Cookbook and recent audio books A Cat’s Nativity Tale and A Cat’s Tale of the Resurrection. 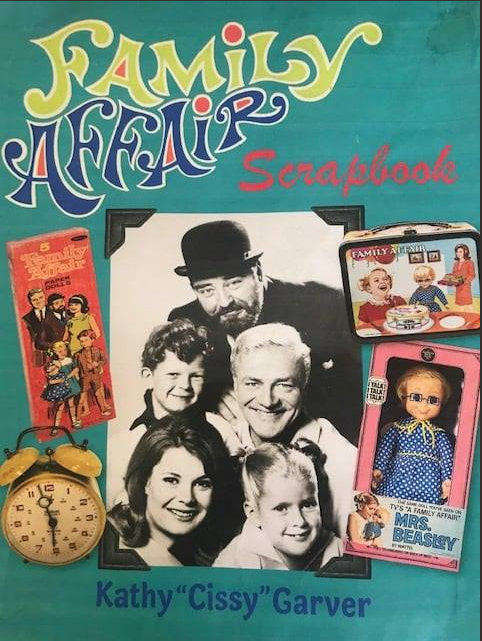 Kathy has outdone her self with Family Affair Scrapbook, the most colorful and information filled book on a TV show that we have seen in a long time. The book has a most colorful collection of pictures and details about the stars and the production itself beautifully put together. You do learn a great deal about the cast members and why they became like family to viewers.

The story line revolved around Bill Davis played by Brian Keith, a bachelor raising his orphaned nieces and nephew Buffy, Jody and Cissy with the help of a proper English Butler, Mr. Giles French. Brian Keith was already an established actor with many film and TV roles behind him and while doing this popular series that ran from 1966 to 1971 they arranged to film around him so he could take other assignments.

The role of Mr. French added a special touch to the show as handled by character actor  Sebastian Cabot. Cabot had a comparatively short career however before Family Affair we remember him best in a detective thriller Checkmate, which introduced us to a rising young actor, Doug McClure.

Anissa Jones and Johnny Whitaker filled the roles of Buffy and Jody. It is very possible that the lives of these two child stars encouraged Kathy Garver to do her X Child Stars book. Kathy played the oldest of the three, Cissy, had a career going back well before the series. She has the gift of perpetually looking young which she retains today and her first film appearance was in The Ten Commandments in 1956. She was in the memorable scene as a little girl needing to be picked up and put on a mount as the Jews were leaving slavery in Egypt. It is Moses played by Charlton Heston who picks her up and sees that she is secure.

The book has each episode of Family Affair listed by year and certain favorite ones are described. What is striking is the number of guest stars who made appearances, many well known in other series. This includes Betty Lynn from The Andy Griffith Show, Robert Reed of The Brady Bunch, Myrna Loy, John Agar, Lee Meriwether, Martha Hyer and many more. Their episodes are also described. 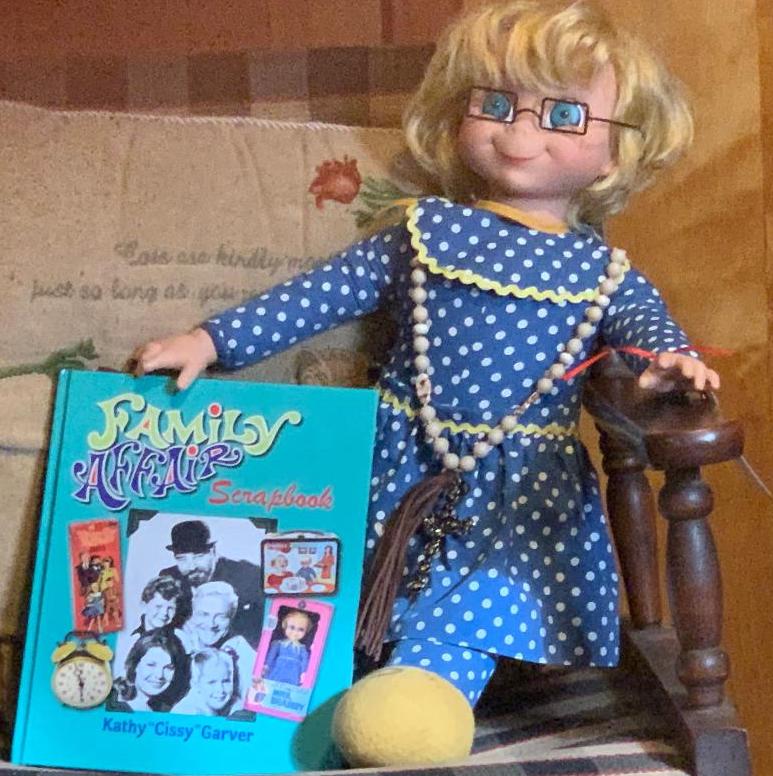 To say the Family Affair Scrapbook has everything would not be exaggerating. There is even a section on merchandizing and our favorite, the Mrs. Beasley doll. A talking version of Mrs. Beasley is still available today and very popular.

What is exciting is that Kathy Garver is still at the top of her game and making films as well as numerous appearances at media shows. She is a leader in many organizations including being a director for Point North Outreach, an international Christian media organization. One of her many projects we look forward to is a TV series titled Aunt Cissy, a spinoff of Family Affair.