While the supply chain crisis left American store shelves bare, Biden went to a UN climate conference to save the world. Saving the world is a whole lot easier than stocking shelves. Ask any teenager. 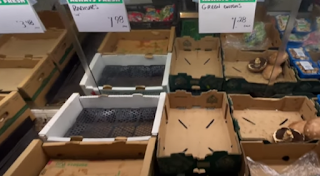 Saving the world used to be the preoccupation of dilettante intellectuals who could solve all of the problems of the world in their heads, but couldn’t handle the simplest life tasks. The rise of socialism has reduced much of the world to the same grandiose incompetence. The western world has been put into the hands of men and women who can’t get anything done, but promise to change the world.

Like the Soviet Union and other Communist countries, we have become a nation of moral crusaders and misery where goods shortages are papered over with wars against intangible social problems. Public officials no longer solve problems, like ivory tower academics they delve into root causes and produce theories explaining why the problems can’t be solved without changing society and humanity.

It’s as if you invited a plumber to fix your toilet only to lectured about the history of plumbing in ancient Egypt, gender roles, and social expectation while your toilet goes on flooding the floor.

While Democrats go down the rabbit hole of root causes, their cities are overrun with crime and human waste, prices for everything skyrocket, and some goods can no longer be had at any price. Confronted with this reality, they build walls of words, seizing on talking points to convince the public that the problems don’t exist or that they’re actually symptoms of deep social problems going back centuries even though they only date back to last week. Either approach frees them from having to solve them.

Do elites turn socialist as they become more incompetent or do they become more incompetent as they embrace socialism? The chicken and the egg problem that made even formerly prosperous Eastern European and Latin American countries into miserable failed states, that divided the two Koreas between booming industry and mass hunger, is arriving in America with much the same outcome.

American bureaucracy is bigger than ever. The growth of administrators in every field outpaces that of ordinary workers, clients, and products produced. No single decree from a scowling boss in Moscow turned a booming nation of individualists into a timid managerial state with endless rules that apply to every facet of work and everyday life. It was the slow accumulation of individual inertia, cultural safetyism, and crises, real and manufactured, that fossilized into a state of permanent administration.

The hunger of the administrative state for more power and the natural insecurities of its wards gave us everything from the welfare state to universal masking. The shutdowns and mandates of the pandemic are only the latest inevitable development from a system that reacts to every crisis with collective panics that transfer power from the public to unelected bureaucrats. Whatever the details of a crisis, its primary function is to generate more regulations and more overseers to see everyone follows them.

If you think today’s college students are snowflakes, wait until the children who were raised to fear their own parents as sources of infection and to wear masks everywhere finally come of age.

It’s no great challenge to convince a society of frightened people that the end of the world is near.

Call it the ice age, global warming, climate change, or whatever panic brand replaces them when the marketers and pollsters decide that the current term is insufficiently triggering: to people who have been taught to be afraid of everything the end of the world is an entirely plausible scenario.

Environmentalism, like every root cause crisis, tells us to be afraid of ourselves. The terror of our words, our faces, our thoughts, and our possessions has always haunted the Left. Where visionaries saw possibilities, socialism has only seen threats. Its promises to save the world don’t spring from a place of courage, but of fear of others and of the inability of its acolytes to come to grips with real life.

Those who can, do. And those who can’t, warn others that doing anything is the root of all evil.

What else could such a worldview bring forth other than the incompetence, corruption, and tyranny that we see all around us. Problems become power grabs and so there’s no incentive to solve them, only to make them worse. Leftist ideology rationalizes most problems as inherently unsolvable in the short term, only in some long term utopian eventuality that reboots all of human society around its ideals.

Problems like empty store shelves or crime in the streets are ultimately caused by capitalism, individualism, the nuclear family, and the existence of humanity. There’s no solving them without addressing root causes like human nature, civilization, and the survival instinct. Like the USSR, the goal posts for solving even the most mundane problems get moved all the way into infinity.

This arrangement is quite convenient for the bureaucracies, public and private, from which leftist systems and ideologies draw their power. It frees teachers not to teach, companies not to innovate, and officials not to solve problems even as they organize moral crusades against the end of the world.

The true purpose of bureaucracy is always to eliminate competition. The chaos of individualism is collectively managed by stultifying regulations whose goal isn’t fixing problems, but preventing surprises. The administrative state can accept the deaths of millions as long as it follows the rules. That’s why all the administrators who forced nursing homes to accept coronavirus infected patients were never held responsible for the mass deaths that resulted from their horrifying decisions.

Most were even rewarded.

The pandemic shutdowns weren’t motivated by fear of infections, but of unscheduled and uncontrolled infections. The administrative state doesn’t mind people dying, as long as they decide who dies.

World leaders fleeing problems at home to talk global warming at the UN’s COP26 are leaving behind real challenges that they’ve given up trying to solve and are saving the world. What makes leaders like Biden or Boris Johnson, Merkel or Trudeau, who have badly screwed up the prosaic problems they were tasked with believe that they can change the climate when they can’t do much smaller things?

Western leaders no longer tackle real problems that can be solved, only imaginary ones that can’t. Like their socialist forebears they define an overwhelming problem, economic classes, systemic racism, or climate change, and then spend all their time at seminars on how to best tackle its root causes. The solution invariably involves moving money around in ways that favor them and their power base.

This brand of messianic workshopped Communism is even worse than the original because actual Communist regimes at least cared about production while wealthy western leftists outsource production to third world countries so they can spend more time fighting systemic racism or the weather.

Our shortages may be currently less severe than those of a proper Communist dictatorship, but our leaders are even more detached from the basic responsibility of elected officials which is not to “safeguard democracy”, but to justify their work to the system and the people who elected them.

With Biden, America skipped past Lenin and Stalin to go right to the Brezhnev era with senescent apparatchiks overseeing the decline of a country and an economy they don’t actually understand.

America’s elites, bad or good, used to understand how things actually worked. And then they became the products of Ivy League institutions which traded practical skills for abstract theories. Our elites have learned how to lie to us and to rob us, and tell us it’s for our own good, and how to retreat into academic theories to avoid dealing with reality. They’ve learned how to manipulate the artificial systems of bureaucracy and its abstract rule sets, but know next to nothing about the real world.

They’re happy to save the world. Just don’t ask them where the beef is.