After Proposition 47 effectively legalized stealing anything under $950 in California, shoplifting, porch piracy, and all sorts of thefts took off. San Francisco became the epicenter of what the Wall Street Journal described as a “shoplifter’s paradise” with pharmacy chains and numberless small businesses disappearing from the city at a pace unmatched in the country.

But then the social justice looters went too far. 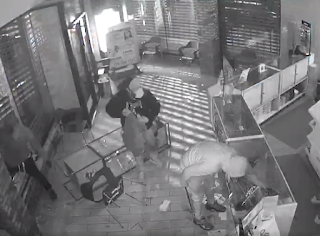 “Last night what we saw was horrible,” Mayor London Breed declared. What she saw was gangs of thugs systematically looting Louis Vuitton, Bloomingdale’s, and Burberry to protest the Rittenhouse verdict.

“This is unacceptable,” Chief Scott declared.

San Francisco DA Chesa Boudin, who had yet to find a criminal he wouldn’t release, claimed to be outraged by the looting.

“We are exploring every single possible criminal charge related to the conduct. We will use every tool in our tool belt,” he blustered.

Those are harsh words from a progressive prosecutor who has been blamed for singlehandedly enabling the robbery craze in the city.

“We’re gonna be making some changes to Union Square and how cars are able to access. There will be limited access in terms of when you come to this area,” Mayor Breed vowed.

Why was looting luxury retail stores “horrible” and “unacceptable” while looting local pharmacies wasn’t? The cops showed up at Union Square guns drawn, smashing car windows, and taking down the thieves even while shoplifters routinely haul garbage bags of stolen goods out of CVS.

Without a police officer in sight.

Louis Vuitton handbags go for upwards of $1,000 to over $15,000. That’s well above the $950 limit. Rob a corner bodega of its stock and you get a slap on the wrist, but steal a pricey purse and laws actually get enforced. That’s the two tier system of social justice in San Francisco that protects Breed’s handbags while leaving small businesses exposed with no protection.

The legalization of looting means that San Francisco’s progressive elites will have their luxury boutiques protected even as seniors can’t get medications because the pharmacies are closing.

An elderly Korean store owner had stood in the doorway, pleading, “Please, don’t loot this store. I don’t want to look — my heart is broken.”

There were no arrests and no consequences.

But when Magnificent Mile was looted, Mayor Lori Lightfoot warned, “Let’s be clear. We are coming for you. We are already at work finding you.”

With progressive prosecutors like Foxx, such threats were rather hollow, but they came in sharp contrast to the daily toll of ordinary burglaries which occasioned no such political grandstanding.

Pro-crime supporters and criminal justice reformers claim that they’re putting people ahead of property, but as the response to the looting of Louis Vuitton shows, the French Laundry Democrat elite put their own property ahead of the property of ordinary taxpayers.

It’s not that they’re incapable of being tough on crime or at least talking tough. Nor do they suffer from principles that leave them unable to be outraged at retail theft. They just differentiate between Korean grocery stores being robbed, and “horrible” and “unacceptable” robberies at luxury boutiques that turn even a pro-crime prosecutor like Chesa Boudin into Dirty Harry.

Stealing isn’t a problem. As long as you’re stealing from someone else.

“We will do what we need to do to put an end to this madness,” Police Chief Bill Scott warned.

The madness here was allowing California lefties to legalize shoplifting and then create a two-tier justice system in which crimes against ordinary people go unpunished.

The amount of a theft should factor into investigating and prosecuting a crime, but California’s criminal justice reform legalized stealing from poor people and criminalized stealing from the rich. That has been the overall effect of all criminal justice reform, from police defunding, which strips public safety from poor neighborhoods while its wealthy backers retreat behind gated communities, high walls, and private security, to setting loose criminals to return to their old minority neighborhoods where they shoot each other, and any women and children in between.

Minorities and the poor, the very people whom lefties claim to want to help, are more likely to be victims of crime and suffer disproportionately from the decriminalization of crime.

Under the pretext of creating a fair justice system, the radicals have turned the formerly democratic public safety systems of major cities into a medieval class system in which only the wealthy reformers who legalize crime deserve to be protected against those same criminals.

The noblesse oblige that impels political elites to set criminals loose doesn’t extend so far as tolerating the rabble when they look beyond the Korean markets to their own establishments.

In the name of progress, the Left has turned back the clock to the dark ages.

While Big Tech bosses, like Facebook’s executives, call for criminal justice reform, they’re protected by 1,000 security officers in the Bay Area alone. The San Francisco Police Department has less than 2,000 police officers. Facebook’s force is half the size of the SFPD.

And the social media monopoly even funded its own private police station.

Facebook’s private army, whose Chief Security Officer is a former CIA agent, which uses one of Biden’s former Secret Service agents to protect CEO Mark Zuckerberg, and which maintains a watchlist tracking anyone who criticises him, is why elites can promote police defunding.

It’s not their police that are being defunded, it’s yours.

And in the event that their security solutions don’t work, they know that the politicians, the police, and even the most cringingly pro-crime prosecutors will rush to their defense.

America’s public safety system used to be based around equality under the law. And that meant, among other things, that the same cops would answer your 911 call as anyone else’s. The destruction of the law also brought down equality and left a deeply unequal system.

While San Francisco elites have their private armies, Kenosha small businesses had Kyle Rittenhouse. When people can no longer rely on the systems of public safety and criminal justice to protect them, they buy guns and they turn to anyone who will protect them.

What does criminal justice reform look like? It’s the police rushing to stop luxury handbag thieves after doing nothing while the same thugs terrorized working class neighborhoods.

A Swiss Experimenter, A Nazi Collaborator, and an Iranian Tech Tycoon Own the Democrats