A report from the Center for Countering Digital Hate warns of the free speech threat from, “climate disinformation, including articles that undermine the existence or impacts of climate change or misrepresent data in ways that might erode trust in climate science experts.”

Big Tech monopolies like Google and Facebook are already preparing censorship measures, but CCDH provided them with a list of censorship targets that covers much of the conservative media including the Washington Times, Breitbart, PJ Media, Town Hall, Western Journal, and many others. The CCDH’s censorship pitch was then swiftly picked up by the Washington Post.

If the past pattern of CCDH reports holds, Senate Democrats will use it as a prop in their latest demand that Big Tech companies censor conservatives and won’t trouble to examine who is behind the unsigned report and the suddenly influential shadowy organization that produced it. 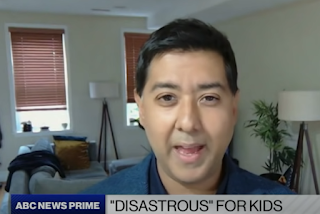 The Center for Countering Digital Hate is a British leftist group run by Imran Ahmed, a former adviser to future London Mayor Sadiq Khan, now operating out of Washington D.C. Ahmed and his media allies claim that they have researchers on staff, but their site names only Ahmed.

The lack of transparency at CCDH extends to even basic staff information which requires digging in ways usually reserved for tracking terrorist cells. And it’s not hard to see why.

CCDH Senior researcher Sophie Wilkinson used to write pieces for Vice and The Guardian. Samples include “I Posed as a Man Online for Sex”, “Slutdropping: the Dancefloor Move That’s Bringing Women Together”, and, “I Got My Faeces Tested to See If It’s ‘Super-Poo’”.

That’s more than any of the media outlets taking the CCDH seriously have done.

Every time a CCDH report drops, the media treats it as gospel while demanding that tech companies account for its accusations and then refusing to listen to contrary evidence. Not since the Steele dossier has the media been this willing to push dubious Brit material without even asking the most basic questions about where it’s coming from and who’s funding it.

And what the hell Imran Ahmed and CCDH are doing lobbying Congress for censorship.

Sit in an airport long enough while a cable news feed blares in the background and sooner or later, Imran Ahmed’s disembodied head will appear warning about the dangers of free speech.

Americans are suckers for British accents and Ahmed, despite being the son of unemployed Pakistani Muslims from Manchester, makes Washington D.C. elites swoon with his pitch for censorship in the same tones they might expect to be sold on gourmet meals or champagne.

Ahmed boasts of advising “politicians in the US, UK, Europe and elsewhere” and his advice is always the same: censor, deplatform, and suppress. None of the politicians or media stop to ask where he came from, why a British Labour adviser suddenly has a home in Washington D.C., let alone who pays his salary and who decided to put him in charge of censoring the internet.

He usually claims to be fighting “disinformation” or “misinformation” when he’s actually a one-man misinformation machine. “There are people gurgling for their breath in ICUs right now who are saying to their doctors, ‘Biden was right the first time,’” he tells The London Times. 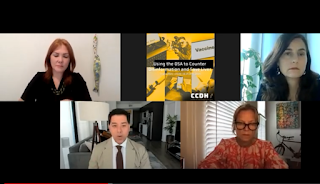 The failed political adviser claims to have the solution for internet speech, yet he knows virtually nothing about the internet. “I don’t fully understand the dark web,” he rambled idiotically on a GB News UK segment. “I don’t really know how to access it very well. My researchers, I’m sure do. But that’s the point, the dark web is really difficult to access.”

If you listen to a few minutes of an Imran Ahmed cable news hit, you’ll know less about the internet than you did going in, but you’ll be convinced that it’s a scary and dangerous place.

Fortunately, Ahmed’s audience of D.C. politicos and media babblers know less than he does. And they never ask the awkward question of what qualifies a former Merrill Lynch employee and British Labour Party adviser to weigh in on free speech in the United States of America.

The CCDH, as its name indicates, got started advocating censorship under the guise of fighting bigotry. Since then it’s moved on to pushing censorship of “medical misinformation” over coronavirus debates and now in its latest report calls for banning “climate denial”. The censorship targets this time include virtually the entire conservative media landscape.

Ahmed and CCDH aren’t just pushing censorship to the media though, but to Congress.

Ahmed admits that CCDH sets out to influence “decision-makers” by using lobbyists and appears to be paying Lot Sixteen LLC, a lobbying firm with lots of green energy clients.

CCDH’s “Toxic Ten” censorship report implies that conservative media oppose an environmental takeover of our economy because they are funded by oil companies, but are there links between Lot Sixteen’s environmentalist clients and the CCDH’s push to suppress conservative criticism of the massive subsidies being funneled to green energy companies?

Are there domestic special interests funding the CCDH censorship effort for economic reasons or are foreign interests paying to lobby Congress to end free speech in America?

The CCDH doesn’t disclose its funders aside from mentioning that it gets some of its money from“philanthropic trusts”. It doesn’t specify which country these “trusts” are located in and whether their funds are used to pay U.S. lobbyists. Its D.C. address is a virtual office that forwards mail and its main British address in London appears to be more of the same.

Ahmed and his Center for Countering Digital Hate claim to be fighting “disinformation”, yet they provide no information about their funders, their staff, or even their actual offices. And what little information can be found through digging raises serious doubts and more troubling questions.

Lindsay Moran, the communications head at CCDH, and one of its few American staffers, boasts of being a “former CIA operative” who had also worked as head of communications at the EPA and a contributor for Al Jazeera. A former CIA case officer wrote of her biography,“It may well serve our many enemies to read this book.” That’s quite a recommendation.

And yet the media shows as little interest in this latest Orwellian Ministry of Information operation transplanted to American soil as it did in the backers of the Steele dossier.

It is curious that the debate about free speech in America has been hijacked by British lefties like former Deputy Prime Minister Nick Clegg, now VP of Global Affairs and Communications at Facebook, and Imran Ahmed, the adviser to assorted shadow Labour ministers, who are not debating whether to censor American conservatives, but how quickly and thoroughly to do it.

Censorship advocates describe the internet as a dangerous shadowy world rife with misinformation, yet they are the ones who operate in the shadows, setting up front groups, building echo chambers, conducting secret negotiations, and planting narratives.

And the censorship of free speech that results is far more dangerous than their alarmism.

Threats can be dealt with by law enforcement and the authorities. Lies can be challenged, debated, and debunked. But rolling back government authoritarianism is an enterprise that has historically involved mass protests, civil wars, revolutions, and political prisoners in gulags.

The pro-censorship lobby doesn’t like language like that. It would even like to ban it. The censors claim that they’re confronting a series of “speech emergencies” by pressuring Big Tech monopolies and governments to form speech cartels that would wipe out bad speech. And they’re always discovering new forms of dangerous speech in urgent need of silencing.

But don’t call them censors.

Ahmed has argued, “We can’t suppress anyone’s opinion or their ability to express their opinion, but what we can do is create costs for their speech.” Ahmed’s cost is what would suppress the ability to express opinions and ultimately the opinions themselves. Americans fought a revolution to end the “cost” of speech exacted on them by a British king. Speech in America is free. But how long will it remain free when the likes of CCDH conspire against it in D.C.?