In 2019, members of the 2nd Battalion, 127th Infantry returned home from Afghanistan. In early October, the 127th left Appleton, Wisconsin and traveled to Fort McCoy for training. 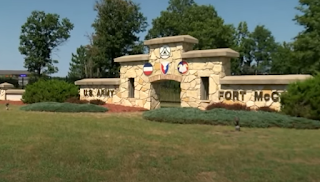 According to Rep. Tom Tiffany, who has paid several visits to Fort McCoy, the base only has the capacity to house 10,000 people, and is struggling to cope with the overflow in tents. When they first arrived some 600 Afghans had been quarantined with a variety of infectious conditions.

Fort McCoy, located in rural Wisconsin between the small cities of Sparta and Tomah, started out as an artillery range and its barracks were intended to house military personnel arriving for training exercises, not huge numbers of foreign migrants. The barracks, which were built during World War II, are in poor condition and a new construction project only recently got underway.

Even while hosting the largest population of Afghan migrants in the country, Fort McCoy struggled to maintain its training role. Over 100,000 troops had trained there during the fiscal year with personnel from all of the services participating in everything from cold weather operations (it gets pretty cold in that part of the country) and various exercises.

When the 127th arrived, the barracks they were meant to sleep in had already been taken. With Afghans sleeping in their barracks and their beds, they reportedly had to sleep outside instead.

“The summers are warm and wet; the winters are freezing, snowy, and windy,” is how the local weather has been described. In October the weather had begun its slow descent from warm and wet to freezing, but it was not the Afghans who were expected to deal with the weather.

According to a Department of Defense spokesperson, “The 2-127 Infantry Battalion was offered access to the hard structures in the field, as the barracks on post are currently occupied by our Afghan guests.” The spokesperson also insisted that, “There were no unexpected weather events during the training and no impact to the Fort McCoy mission or training for the service members.” And yet according to some the impact on morale has been quite serious.

The displacement of American soldiers to make way for Afghan migrants was symbolic of events in Washington D.C. and at Fort McCoy where refugee meals closely follow Islamic Sharia and liquor was removed from the shelves of the PX so as not to offend the Afghans.

The men of the “Red Arrow” are used to challenges. With a history that includes the Iron Brigade of the Civil War and the Les Terribles in WWI, and as members of the Wisconsin National Guard, they’re not afraid of weather. But the displacement drove home to them where the priorities of the military brass lie, not with the soldiers who served in Afghanistan, but the Afghans whom the Taliban waved past their terrorist checkpoints in Kabul and on to America.

Some no longer recognize Fort McCoy, divided into Afghan “neighborhoods” where the hated Shuras (an Islamic form of tribal governance) have been reconvened and are dictating to base personnel the way that they did during the failed “hearts and minds” efforts in Afghanistan.

The national media, which had little interest in Fort McCoy when it was filled with American heroes training to save lives and win wars, has swarmed over the place. The Today Show, among many others, has filmed canned propaganda segments touting carefully selected Afghan refugees, usually young, western, and female, who locals say are unrepresentative of the thousands of covered and frightened young women, many of them pregnant, in the barracks.

Sources say that reporters are asked to leave their cars behind in the visitor lot and then bused over to selected locations. Camera interviews are usually conducted at the main gate to avoid anything problematic in the background.

What are they worried about?

Since the Afghans swarmed into Fort McCoy, two Afghan refugees are federal facing charges, one for “attempting to engage in a sexual act with a minor” and another for “assaulting his spouse by strangling and suffocating her”. But that may only be the tip of a very large iceberg.

A leaked State Department document contained multiple reports of “child brides” and polygamous marriages at Fort McCoy. Wisconsin Democrats however tried to shut down reports by whistleblowers about the abuse of young girls happening right on our military bases.

“There are no cases in Fort McCoy right now with child, 15-or- under, who is married,” Sen. Tammy Baldwin contended in a very precisely worded denial leaving open the question of whether such cases had existed in the past or whether the children weren’t technically married.

Locals in nearby Sparta whose medical resources have been drafted into the Afghan refugee crisis however describe large numbers of pregnant women, some looking very young and a threatening atmosphere where calls to emergency services in the small city are a constant.

The media plays up stories of impoverished refugees, but sources say that the Fort McCoy Post Exchange keeps running out of smaller bills because the Afghan refugees have plenty of hundred dollar bills to spend. Not to mention credit cards and cell phones.

While locals have generously donated their own clothing, the Islamic Society of Milwaukee has been conducting its own clothing drive focused on hijabs and “traditional” and “modest clothing” for the women. The infidel clothes apparently weren’t sufficiently compliant with Sharia law.

Despite media disinformation, few if any of the Afghans were “interpreters”, many did not even speak English, and the vast majority had not received visas to come to the United States, When the Biden administration surrendered Kabul to the Taliban, it allowed the terrorist group to man the checkpoints and pick which Afghans (and Americans) were allowed to make it to the airport.

The Afghans who had legitimate visas based on their time working for the United States were not allowed through. Some may have been abducted and killed after the Biden administration turned over lists of visa recipients to the Taliban. Only 1,800 SIV visa holders made it here. Another 50,000 were Afghans who had no legal right to be here and once in this country began committing crimes and disappearing from the bases that were hosting them.

Many in Sparta are worried about what this influx of Afghan migrants means for them.

When Cuban refugees were housed at Fort McCoy, some stayed on in the area. Locals are concerned that history may repeat itself with the large number of Afghans. Even if only a few hundred are left behind, they could significantly change the character of the area.

To some locals, the sight of Americans being displaced by Afghans may be their future.