Wesley Muhammad believes that the U.S. government and the Jews are using marijuana to make black men gay. The “Pot Plot” is a popular theory in Muhammad’s Nation of Islam cult.

At the Saviours Day Convention in Chicago, an official Nation of Islam event, Wesley Muhammad claimed that, “It is Jewish genius that has helped… to weaponize the weed so that it may effeminize the black male of America. And be clear, it is Farrakhan and the Nation of Islam that is standing in between the total demasculinization of the black man in America.” 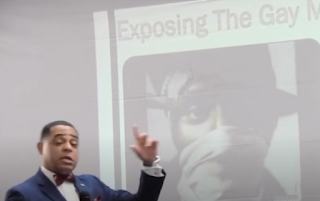 Some years back, Wesley Muhammad’s lecture, “How to Make a Homosexual: The Scientific Assault on Black America” was canceled at a Philly black beauty expo because of its hateful content. But what wasn’t good enough for the 23rd Annual International Locks Conference, a black natural hair expo, is unfortunately all too welcome at San Francisco State University.

It’s not too surprising that a black “wholistic” hair expo has higher standards than the most antisemitic university in America. Or that Muhammad fits in so well at SFSU.

“It is clear that the two most powerful lobbies in America – the Jewish and the Homosexual – are hellbent on the information in this lecture, ‘How To Make A Homosexualm (sic)’ NEVER makes it to the public’s awareness,” Muhammad complained on Facebook.

San Francisco State University has however been happy to provide Muhammad with a platform despite no shortage of ethnically Jewish and gay people on the faculty and in the administration.

Wesley Muhammad’s bio at the taxpayer-funded university notes that he is a lecturer in the Africana Studies Department of SFSU’s College of Ethnic Studies. It mentions his publications in the Final Call newspaper of the Nation of Islam hate group, and his book, “Understanding the Assault on the Black Man, Black Manhood and Black Masculinity” which contains thoughtful chapters such as “Why Saggin is Faggin” and “Birth of the Black Man (God)”.

It also notes that Muhammad is a “helper of the Honorable Minister Louis Farrakhan” and a member of the executive council of the Nation of Islam hate group, and mentions his role in Tariq Nasheed’s Buck Breaking documentary which claimed that black people were a master race and that white slave owners turned black men gay.

“I thank the Honorable Brother Minister Farrakhan for granting me permission to return to the place that I love, the classroom,” a Facebook account with Muhammad’s name posted. “This Pestilence From Heaven has made it possible for me do the Labor that I love at the Headquarters of my Beloved Nation of Islam AND teach about Black Religion and the Black God in the Africana Studies Department at San Francisco State University.”

“All Praises Belongs (sic) To Allah,” he concluded.

A course listing shows Muhammad teaching courses on “Black Religion” and “Malcolm X in the Context of Black Nationalism”. The courses are taught online which apparently allows Muhammad, a top official in the Nation of Islam, to teach remotely.

That the Nation of Islam killed Malcolm X only adds another layer to this obscene farce.

By describing the pandemic as a “pestilence from heaven”, Muhammad echoed Farrakhan’s remarks that the coronavirus was one of Allah’s “great plagues”. But Muhammad additionally claimed that “we’ve documented the first area codes that were devastated by coronavirus in America were Jewish area codes” implying that the virus was aimed by Allah at the Jews.

A lecturer celebrating the coronavirus for allowing him to teach remotely and claiming that black gay men are the products of a Jewish conspiracy may seem out of place on today’s college campuses where a Chinese composer was forced out of the classroom for showing an Othello movie and at Yale an American Indian student faced the threat of sanctions for a party invite touting fried chicken, but there are two sets of rules. And at SFSU, the bigots have always enjoyed the second set.

In the 90s, Khalid Muhammad, another Nation of Islam figure, was invitedto deliver a speech by the Pan Afrikan Student Union which advertised tickets as being $7 for students and $15 for “Zionists, Uncle Toms and other white supremacists.” During his speech Muhammad ranted about “hook-nosed, bagel-eating, lox-eating, perpetrating-a-fraud so-called Jews” and urged his racist audience to “use violence when necessary.”

It’s all part of the ugly atmosphere of antisemitic hatred that has been mainstreamed at the public university where taxpayers pay the bills for the professors and groups that hate them.

SFSU was also where, more recently, Muhammad Hammad, the president of the General Union of Palestine Students, was investigated after making violent threats toward Jews.

San Francisco State University had been ground zero for campus antisemitism. It was where Hatem Bazian, the co-founder of Students for Justice in Palestine, the hate group that now has chapters on many campuses, got his start. A column by the coordinator for SF’s Jewish Community Relations Council described the scene as “Hatem Bazian and a group of about 25 students storm the offices of the student newspaper, the Golden Gater. They destroy hundreds of copies of that day’s edition. They yell anti-Semitic and racist epithets in the newsroom”.

Since then not much has changed.

A lawsuit filed more recently in 2017 by Jewish students charged that, “SFSU has not merely fostered and embraced anti-Jewish hostility — it has systematically supported these departments and student groups as they have doggedly organized their efforts to target, threaten, and intimidate Jewish students on campus and deprive them of their civil rights and their ability to feel safe and secure as they pursue their education.”

Earlier this year, SFSU’s Rabab Abdulhadi, the faculty advisor for GUPS, took part in a seminar featuring a terrorist airplane hijacker after having already met with that same terrorist during an SFSU funded trip. No wonder that SFSU was one of the universities singled out by the David Horowitz Freedom Center as one of the “Top Ten Schools Supporting Terrorists”.

At San Francisco State University, the question isn’t whether it’s an antisemitic campus, but just how antisemitic it is. And even by SFSU standards, the “pot plot” is a new low. At San Francisco’s premier public university, students can not only interact with faculty who support terrorists, but who believe that the Jews are using marijuana to turn black men gay.

How low can SFSU go? Wesley Muhammad makes it clear that there’s no low too low.

Never Trumpers and Black Lives Matter Have the Same Backer