Kamala Devi Harris doesn’t know a whole lot, but she knows how to play a race card that the child of wealthy foreign students, the Montreal educated daughter raised by a Brahmin Indian mother, the San Francisco socialite, and Brentwood resident married to a Jewish entertainment industry lawyer, is even less entitled to than its previous career abuser, Barack Hussein Obama. 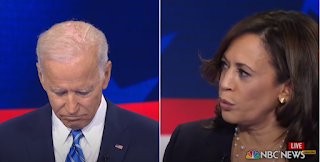 When Kamala tried to force Biden out of the race and take his black supporters, she accused him of racism for opposing busing. This false claim was backed by her even more preposterous contention that being bused through the segregated Mason-Dixon line of Berkeley was the only reason she ever achieved her current career. Willie Brown could not be reached for comment.

Did Kamala believe her own accusation? When she was being interviewed by Biden’s vice presidential search committee, “She laughed and said, ‘that’s politics.’ She had no remorse.”

Kamala’s cynical race gambit or, more accurately, Biden’s weak and inept reaction to it, temporarily shook up the race, but black voters proved to be more loyal to the Democrat establishment and returned to Biden leaving Kamala with nothing except wasted millions.

As voters turned on her, Kamala responded by accusing them of being sexists and racists.

“Is America ready for that? Are they ready for a woman of color to be President of the United States?” she whined.

They certainly weren’t ready for Kamala who polled at 2% among women and 4% among black voters. Black voters backed Biden and torpedoed her presidential path to the White House.

After raising $36 million and dropping out without facing a single primary, Kamala was picked as the number two for a confused old white man. So what were the odds that she would go back to calling him a racist at the first sign of trouble? Much like the story of the scorpion and the frog, or the farmer and the viper, Kamala is a poisonous creature with only one brand of venom.

Kamala’s poll numbers are terrible. They’re so terrible that they’re even worse than Biden’s. And so with tedious predictability, Kamala, who only has her current job because Biden promised to pick a black woman and the other leading alternatives were a Castro supporter and Stacey Abrams, is dragging out the race card for another shopping spree at the victimhood store.

After the Biden administration came to the defense of Secretary of Transportation Pete Buttigieg for going on vacation while the supply chain imploded, Kamala’s people are implying that the administration isn’t defending her the same way because she’s not a white man.

“It’s hard to miss the specific energy that the White House brings to defend a white man, knowing that Kamala Harris has spent almost a year taking a lot of the hits that the West Wing didn’t want to take themselves,” one of her former aides was quoted as telling CNN.

If the Biden administration is so racist, why did it pick Kamala over Buttigieg?

But since accusations of racism trigger the equivalent of Defcon 3 among Democrats, White House press secretary Jen Psaki was rushed out to tweet that Kamala was a “bold leader”.

No one can think of anything that Kamala has led on, boldly or otherwise, except calling other people racists to get her way, and like everything else about her, it’s not remotely original.

But how else is the Biden administration supposed to defend its least popular figure? And in an administration that includes a president who gropes small children, a defense secretary who focused on critical race theory while Afghanistan fell, a transportation secretary who took a two month vacation during a transportation crisis, a windsurfing traitor, a mass murdering version of Klinger, and a health secretary whose only health experience is persecuting journalists who exposed the baby parts ring of his abortion allies, being the most unpopular is an achievement.

Unfortunately it’s also Kamala’s only achievement aside from “making history” by showing up.

Buttigieg was being criticised for not doing his job, but Kamala’s only real job is waiting for Biden to die, become incapacitated, or even less popular than her. Two of those things might happen, but considering that she’s polling at 28%, the third is almost certainly never going to take place.

Every attempt at expanding Kamala’s portfolio and giving her more imaginary jobs, flying her to Asia and France, is a poor attempt to disguise the fact that she’s the equivalent of the greedy niece waiting around for her rich uncle to die and leave her his fortune. And for three years the polls have consistently shown that most Americans don’t want Kamala to be POTUS. Ever.

So Kamala’s political allies are back to blaming sexism and racism for her unpopularity.

But a recent Economist poll showed that 35% of women had a very unfavorable impression of her compared to only 22% with a very favorable view of Kamala. Even black voters, generally lockstep loyal to the Biden administration, rate the old white man at the top better than her.

Kamala’s problem isn’t racism or sexism, her race or gender, it’s herself.

Crying racism and sexism works but only on a very temporary basis. And Kamala and her allies have spent so much time crying wolf that the latest abuse of the race card has gone unnoticed.

Earlier this year, Kamala’s fan club or the KHive, was howling that an insufficiently flattering Vogue cover was racist. That nonsense generated media headlines like, “A Tale of Two Covers” (MSNBC), “Kamala Harris Cover Shows Diminishing Powerful Black Women is Still in Fashion” (Washington Post), and “Kamala Harris’s ‘Vogue’ Cover Is The Epitome Of A Racial Microaggression” (Gilbert and Sullivan). But you can only keep on playing the victim for so long.

Kamala’s staffers are complaining that they don’t have enough resources and need more money even though the FY 2021 budget for the veep’s office is $5 million and funds a massive full-time staff of 25 people. How much does Kamala really need to sit around and do nothing?

The revival of the racism accusations are a shot across the bow of the Biden administration.

Al Sharpton publicly announced that he was going to complain to Biden that Kamala was being mistreated, and his hate group would “continue to fight for her to be in a position of power because we want to see her thrive, and I will communicate that to the President.”

Does Kamala imagine that’s going to help her? Every time the administration gave her even the smallest degree of responsibility, she managed to blow it. A politician who can mess up a student Q&A and a NASA promotional video has a gift for putting her pumps in her mouth. And, just like during her primary race, instead of admitting that she made a mistake, Kamala and her people start blaming sexism and racism for their last scandal to distract from the next one.

Kamala managed to temporarily reinvent her privileged childhood as a California Jim Crow, now she’s trying to even more implausibly pull off the same pathetic trick inside the White House.

As the scorpion said to the frog just after it bit him and before they both drowned, “I couldn’t help it. It’s in my nature.”