Earlier this year, Frankie Harris, 38, a vicious criminal attacked a 64-year-old woman in Harlem from behind, strangled her for three minutes, and then pulled her to the ground and raped her.

Then he left her in a pool of her own blood. When the police caught him, he claimed it was “consensual”.

His victim died after spending a week in a coma. 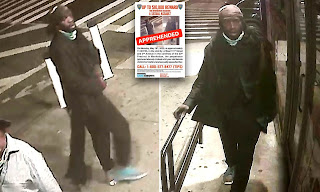 The monster who attacked her (pictured) had been set loose twice after previous attacks that same year, including forcible touching and sex abuse, and was sent into supervised release programs, instead of being safely locked up because New York Democrats had eliminated “cash bail”.

The pro-crime program of eliminating bail protections has led to a wave of assaults on women.

While New York City judges have released rapists without bail, including an illegal alien child rapist, it’s become the new normal around the country where the combination of pro-crime “criminal justice reform” and Soros DAs has effectively dismantled the criminal justice system.

Now Joe Biden, who has been accused of sexual assault by a former aide, claims that he wants to “help” women by ending cash bail and setting countless rapists loose to prey on women.

Biden had run on a plan to free criminals by ending bail, vowing that he would “lead a national effort to end cash bail” and now as crime is hitting new highs, he’s preparing to advance his pro-crime program under the guise of protecting women by empowering their abusers.

Biden and Kamala Harris, who had been accused of covering up sexual harassment by her close aide and personal friend, announced the creation of a White House Gender Policy Council earlier this year. The council is co-chaired by Jennifer Klein, the former chief strategy and policy officer at the disgraced Hollywood sexual harassment cover-up group, Time’s Up.

So it’s not especially surprising that the Council’s National Strategy on Gender Equity and Equality report warns that “we will work to end cash bail and reform our pretrial system, recognizing the harm these processes cause, particularly for black women and families.”

Last year, black women were the only group who suffered more rapes than the year before.

The dismantling of bail protections has repeatedly put sexual predators and rapists back on the street to reoffend. Kamala Harris, who has advocated for the Gender Policy Council, ought to know that better than anyone else. Or at least she would if she had a conscience.

Kamala Harris had urged her supporters to donate to the Minnesota Freedom Fund which exists to bail out criminals.

Kamala helped raise millions to set loose monsters in Minnesota. The beneficiaries of the attack on bail protections for victims included Timothy Wayne Columbus, a child rapist accused of sexually assaulting a little girl, and Christopher Boswell, who had raped two women, hitting one over the head and trying to run her over, before assaulting his latest victim with a glass bottle.

Others included George Howard, bailed out for domestic assault before shooting a driver, Donavan Dexter Boone, accused of choking his ex-girlfriend in front of her children, Marcus Marshun Butler, of beating his girlfriend with a closed fist, Tyrone Thomas Shields, of leaving a “larger than golf sized bump” on his wife’s head, and Davlin Devonte Gates, of choking his girlfriend until she lost consciousness, after four previous domestic violence convictions.

“A big part of my career has been about protecting women and children,” Kamala Harris has falsely claimed. There are a whole bunch of women in Minnesota who would disagree.

Did Kamala learn anything from lending her support for releasing rapists and abusers without bail? The National Strategy on Gender Equity and Equality makes it clear she did not.

Even as crime is soaring, the Biden-Harris administration is doubling down on pro-crime. And it’s trying to pass off its program of putting more criminals back on the street under the guise of helping women. But if there’s any group of people who have collectively done more damage to women than Joe Biden, Kamala Harris, and Time’s Up… it would be the Taliban.

To whom Joe Biden and Kamala Harris turned over the women and girls of Afghanistan.

Beyond releasing rapists, Biden’s White House Gender Policy Council comes after women by demanding that men be able to compete against female athletes “free from discrimination” and vows that it will work to end “harmful gender norms”. Which seems to be all gender norms.

None of this helps women, but then again it’s no longer the Council on Women and Girls, instead the Biden-Harris administration erased women and renamed it to the Gender Policy Council, turning it into an extension of their own private war on the female gender.

The National Strategy on Gender Equity pushes every unrelated leftist agenda from global warming to welfare programs, while neglecting the female victims of its pro-crime policies.

Those extra 54,589 women are a statistic the media makes sure we don’t hear about.

What impact did the various crimes they endured have on their incomes, their health, their sense of security, their mental state, their ability to learn a living, and on their lives?

That’s a question that the pro-crime Gender Policy Council has no interest in addressing.

705 more women were murdered in the year of BLM when pro-crime policies became the law of the land and criminal justice systems were dismantled.

Over 2,000 more were robbed. 78,676 more suffered property crimes than in the previous year.

And the Biden administration has made it clear that it will go on championing the pro-crime policies that have made 2021 even worse for crime victims than even 2020.

“He said, ‘I want to f— you,'” Tara Reade recalls Joe Biden telling her before he assaulted her.

Eight women have accused Biden of inappropriate behavior. There are no doubt many more.

But as dangerous as Biden was to women, the Biden administration is even more so. Unsatisfied with the awful toll that his personal misconduct has inflicted on women, Joe Biden wants the women and girls of America to be terrified in their homes and their communities. He wants to eliminate bail and set rapists and sexual predators loose across this country.

And Biden claims he’s doing it to help women.