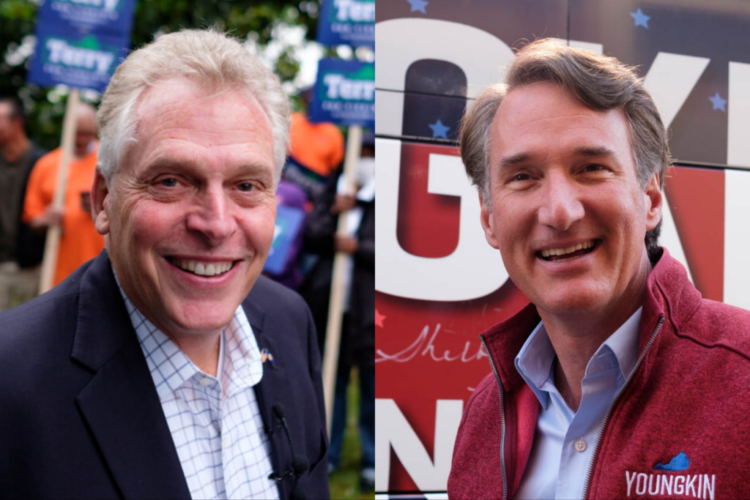 Election day for governor is upon us in Virginia. In one corner we have the establishment: former Clinton associate and also former governor of Virginia, Terry McAuliffe. In the other corner, newcomer to the political scene, business man Glenn Youngkin. This has been a pretty contentious campaign. Ads have been running non-stop for months now – even to the point where political junkies like me are saying ENOUGH ALREADY.

For most of the campaign, McAuliffe has maintained a pretty comfortable lead – until the last month. This is almost a carbon copy of the 2013 race where he won by 2.6% after leading by double digits. In that race he almost blew it over the abortion issue. Cuccinelli would have won had the Republican Party spend a bit more on it and Bill Bolling had endorsed Cuccinelli instead of taking his ball and going home because he wasn’t the nominee.

Youngkin has run a very smart and effective campaign. He has moved just close enough to Trump to keep the MAGA voters on board but not close enough to get burned. The Democrats have tried to make the Trump-like charge stick but to no avail. He’s also been one of the most accessible candidates in recent history, meeting folks all over the state.

But ultimately, this race has been shaped by miscues (and a major gaffe) from McAuliffe and the Democrats that have been great gifts for the Youngkin campaign:

First, you have the unpopularity of the Biden Administration. The economy in shambles, the complete disaster in Afghanistan and the dictatorial fashion of the covid mandates has been a huge drag on Democrat ticket here in the Old Dominion.

Then you have one of the worst gaffes in political history (well, not so much a gaffe as revealing what the left really thinks about parents). In the last debate in September, McAuliffe said this:

“I’m not going to let parents come into schools and actually take books out and make their own decision. I don’t think parents should be telling schools what they should teach.”

This in itself would have been a mistake, but you combine it with the sexual assault cover-up that occurred in Loudon County schools, which I wrote about here, and the race has been completely turned around. Recent polls have shown an incredible 42 point swing away from McAuliffe, based on who is favored on education. This is an albatross around his neck. Youngkin had campaign ads up about it in just a few days. Then when McAuliffe claimed he was taken out of context, Youngkin ran more ads showing the video again and again. (Note to other Republicans: this is how it is done!)

So we’re just hours away from the election (although early voting has been going on for awhile). My take on it as it closes:

The McAuliffe campaign is in desperation mode. Youngkin has all the momentum and they know it. They even pulled out the racist card in recent days. Liberal activists posing as white supremacists gathered outside a Youngkin campaign bus pretending to be supporters. The hoax was soon exposed:

The Lincoln Project claimed credit for organizing a white supremacist stunt in front of Glenn Youngkin’s campaign bus on Friday, but not before several staffers from the opposing campaign used the incident to bash the Republican candidate for Virginia governor.

The anti-Trump and anti-Republican organization said it sent the tiki torch–wielding group to remind Virginia voters of the white-nationalist march that took place in Charlottesville in 2017 and “the Republican party’s embrace of those values, and Glenn Youngkin’s failure to condemn it.”

Despite many conservatives’ immediately questioning the validity of the demonstration, several McAuliffe staffers boosted news of the incident as if it were real, including aide Jen Goodman, who called it “disgusting and disqualifying” for Youngkin.

McAuliffe spokeswoman Christina Freundlich used it as an opportunity to say “this is who Glenn Youngkin’s supporters are.”

Then there’s Eric Swalwell, who tweeted this: “There’s a word GlennYoungkin would really like to say to talk about black people, but he knows he can’t, so he codes it with “Critical Race Theory.”

Well, there’s some words I’d like to use to describe Eric Swallwell. But I will be nice and say he’s just a silly and ridiculous little man who so desperately wants to be a big fish. Why anyone give him any relevance is beyond my comprehension.

I won’t hazard to make a prediction. It could go either way. Fox News has Youngkin up by 8, others show a virtual tie. But I do know this. If Youngkin wins, McAuliffe will not accept the results (especially if it’s close). In fact, he has already hired a lawyer for the post-election challenge:

As a long-standing associate of the Clintons, Virginia Democratic gubernatorial candidate Terry McAuliffe has long ties with the Democratic establishment. That history was placed into sharp relief this week when he made a hefty down payment on the services of former Clinton counsel Marc Elias. Elias is a critical figure in the ongoing Durham investigation and has been accused of lying to the media to hide the role of the Clinton campaign in funding the Steele dossier. His former law partner Michael Sussmann at Perkins Coie was recently indicted by Durham. Elias has also led efforts to challenge Democratic losses, even as he denounces Republicans for such election challenges. Elias has been sanctioned in past litigation.

Like Sussmann, Elias has left Perkins Coie. He ironically created a law firm specializing in campaign ethics. McAuliffe may be preparing to challenge any win by Republican Glenn Youngkin. He has given $53,680 to the Elias Law Group. McAuliffe does not appear disturbed by Elias’ highly controversial career or his possible exposure in the Durham investigation.

McAuliffe is a sleazy politician and with any luck will be defeated on Tuesday.