Biden claims that the Build Back Better Act will help ordinary Americans, but the legislation, like so much in Washington D.C., is a collection of pork for corrupt special interests. One of those special interests is the media which suppressed negative stories about Biden and the Democrats, like the FBI investigation of Hunter Biden, while promoting disinformation, like the Steele Dossier, targeting President Trump: Biden’s opponent in the presidential election. 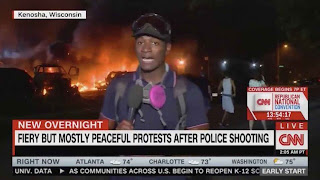 The media operates like a Democrat messaging operation and its partisanship has undermined its business model, especially for local news outlets which, unlike major national outlets, cannot simply ignore their existing readers and viewers to focus exclusively on radical urban leftists.

Congressional Democrats, with the complicity of some Republicans, had previously proposed media subsidy schemes that included tax credits for media companies, tax breaks for subscribing to papers, and even a $5,000 tax credit for taking out an ad in the local paper.

The media subsidy scheme in Biden’s Build Back Better Act offers $1.9 billion to the media with a payroll tax credit covering 50% of salaries, as much as $25,000, for the Democrat propagandists on media company payrolls, and another 30% over the next four years.

While the Democrats claim that this $1.9 billion special interest giveaway to the media is helping “local news”, it’s capped at 1,500 employees. The Washington Post has only a little over 1,000 “journalists” on its payroll. The legislation is written in a typically convoluted fashion, so it’s not altogether clear if the premier propaganda outlet of the Democrats, owned by the richest man in the country, would qualify for these subsidies at a time when Americans are struggling to get by.

Lest there be any doubt that the so-called “local journalism” provision is a State Media scheme to subsidize hit pieces on Republicans, Democrats explained that’s exactly what it’s there for.

“There was no opportunity for local media to provide even basic information about the candidates,” Rep. Blumenauer whined. “The guy would never have been elected if he had gotten any scrutiny at all.” By scrutiny, the leftist Democrat means hit pieces, of the kind that the media belatedly began generating after the truck driver’s unexpected election night win.

Give the media $1.9 billion in subsidies and they can stop the next truck driver from beating their Senate boss through lies, smears, intimidation, and disinformation campaigns.

If this dirty deal were any more corrupt, it would be taking place in a brothel.

But Democrats are not just relying on the innate biases of the media. One of the biggest dark money investments of their political machines have been fake news local operations.

Courier Newsroom, backed by the controversial Acronym/Pacronym network, had begun generating fake local news sites for the 2020 election with names like “UpNorth News” in Wisconsin. It’s being rebooted with the backing of George Soros and LinkedIn founder Reid Hoffman who had previously been caught pushing fake news through the Alabama Project.

The Alabama Project had, in its own words, targeted the state’s Senate election, by having “orchestrated an elaborate ‘false flag’ operation that planted the idea that the Moore campaign was amplified on social media by a Russian botnet.”

The LinkedIn co-founder apologized, claimed that he knew nothing and that it would never happen again. And here he is, alongside Soros, backing Good Information Inc. which will fund non-profit propaganda media and invest in for-profit media that pushes its political agenda.

The Build Back Better Act’s $1.9 billion media subsidy isn’t just funding an industry aligned with the Democrats, but one that has become a false flag operation for its messaging apparatus.

The Dems might just as well add $1.9 billion in subsidies for their own political consultants.

The connection between the media’s political fake news operations and the pork isn’t even being disguised.

CNN’s Brian Stelter quotes “Report for America co-founder Steven Waldman, who has helped lead the drive for the tax credit”, saying, “It’s a huge breakthrough for local news if it becomes law.” Report for America is indeed vocally advocating for the Democrat media subsidy. And it would be a “huge breakthrough” if part of the cost of Democrat messaging operations were being subsidized by American taxpayers freeing Dem megadonors to wage war elsewhere.

But the core business model of the leftist machine has been to not simply establish political operations that can swing elections, but figuring out how to make them into permanent taxpayer-funded features of public life so they can move on to their next “startup”.

Waldman, like CNN and Report for America, not to mention many of RFA’s megadonors, operate out of New York City. Their interest isn’t in local news, it’s in winning elections. Local elections are now routinely swung by rivers of cash coming out of New York and California. Not satisfied with using billions to rig local elections in places they would never visit, they want American taxpayers to subsidize their political activists and their fake news operations.

The media has gone to work telling Americans that giving them billions is actually a wonderful idea in the ultimate example of a conflict of interest. What the media neglects to mention is that its outlets are facing hard financial times because they have alienated two thirds of their audience. Unable to convince Americans to watch, read, and pay for their lies, they’re now resorting to extracting the money through the politicians they’ve been working to elect.

The same radical shift in the media that alienated its readers and viewers also vested the industry with the political power to steal billions from Americans and put it in their pockets.

The media is no longer an independent industry, it’s an arm of the ruling party.

The $1.9 million in media subsidies is a timely reminder that the only thing that the trillions in special interest pork are actually “building back better” is the Democrat Party.