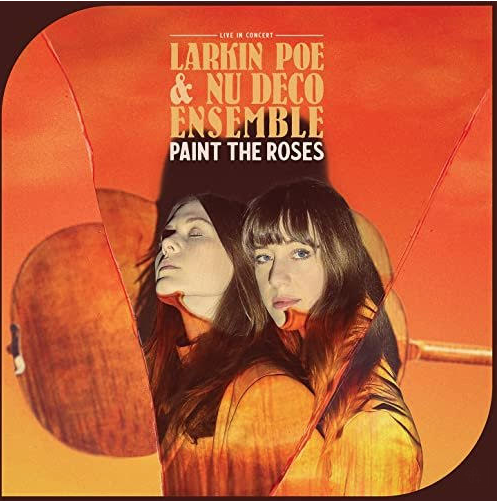 On September 18, PolitiChicks published my first of a quarterly series titled, Michael Ingmire: Women in the Blues, Donna Herula & Larkin Poe. Within the context of that article I wrote about my respect for the two sister led, Roots-Rock group, Larkin Poe. As I referenced in the September 18th piece, the music of Larkin Poe was the most pleasant musical discovery in 2020 for this writer.

In 2020, Larkin Poe had recorded and released two studio CD’s. These were two in a long line of exceptionally created and executed CD’s that they have recorded independently since 2014. The two 2020 works were the original album,”Self Made Man,” and the all covers album, “Kindred Spirits.”  Both are excellent pieces of work. “Self Made Man,” has a song, “God Moves On the Water,” that is my favorite song on the album. It is an adaptation of a traditional song that originated with the 1920/30’s Texas Gospel Singer-Slide Guitarist, Blind Willie Johnson.

The homage to Johnson articulates resoundingly the influence that musicians like Blind Willie Johnson, Son House, Skip James and Robert Johnson, among others, have had on their work. The Blues of that region of America has a darkness and a transcendence that has had a marked influence, among other sources, on the music of Larkin Poe.

Self Made Man, has excellent originals such as “Every Bird That Flies and Back Down South.” In “Back Down South,” Larkin Poe shares a credit with talented Guitarist-Musician Tyler Bryant. Bryant married Larkin Poe Lead Singer/Multi-instrumentalist/ Composer, Rebecca Lovell, in October 2019. Bryant is also currently playing selective dates on Larkin Poe’s 2021 Monster Energy Outbreak Tour.

Larkin Poe’s, “Kindred Spirits” is one of the most original and delightful albums of covers by any musical duo or group that I have ever heard. Incredible surprises on Kindred Spirits. Larkin Poe was poised to tour behind two strong records in 2020. Than the pandemic hit and no live shows for the duo and their group.

Instead of touring, Larkin Poe decided to collaborate with the Miami Based orchestra, Nu-Deco Ensemble on the recently released, “Paint the Roses.” This was recorded before a small outdoor audience in December 2020. The concert was staged at the Miami bandshell. Nu Deco Ensemble bends genres with their own concerts and their collaborations with top shelf artists such as Larkin Poe. They are an inclusive, community based orchestra that are comprised of brilliant musicians.

Nu Deco Ensemble Co-founders, Jacomo Barios and Sam Hyken, worked closely with Larkin Poe on this stunning collaborative effort. Considering the sisters early training in Classical Violin and Piano, this was a smart musical marriage. “Paint the Roses,” was released on September 17th. Without any remote doubt, this is one of the best recorded works released in 2021. Absolutely, the best collaboration, in any genre, released this year.

The album opens with a version of the Bessie Jones/Alan Lomax Gospel composition, “Sometimes.” Larkin Poe originally recorded this song on their 2018, “Venom & Faith,” CD. The Venom & Faith version was brilliantly orchestrated in of itself. Yet, there is a depth in the recent Paint the Roses version that is breathtaking. Nothing like hearing a great string section creating a sonic depth to a great performance. There is an element of an almost, New Orleans second line approach to this song with Megan Lovell’s classic lap steel adding a spooky undertone.

The second track is a new version the aforementioned track from “Self Made Man.”  “Back Down South,” is a celebration of music from the Lovell sisters home state of Georgia, written in collaboration with Tyler Bryant. The lyrics reference Georgia based artists such as Little Richard and the Allman Brothers.

Rebecca Lovell outdoes herself in the expansive chorus of this Southern celebration:

“Streets of Gold
Ain’t that red dirt clay
Leave some peaches in a basket by the pearly gates
When my race is run, hear that angel sound
May the good lord show me mercy
Send me back down South”

Adding to the expansiveness is the duel guitar sound of Rebecca Lovell’s Stratocaster guitar and Megan Lovell’s lap steel. Not for nothing are these ladies called the “Little Sisters of the Allman Brothers.” Their guitar work recalls the best work of the Allman’s Duane Allman and Dickey Betts. The Orchestra supports this foray with stunning backing. The Allman Brothers reference is furthered when they take a brief detour into a section of the Allman Brothers, “Blue Sky.” Seamless, well executed artistry.

Among more longstanding fans of Larkin Poe there has been a song that has never been recorded until the Paint the Roses collaboration. This song is “Mad as a Hatter.” It is a tribute to their fraternal Grandfather, who suffered from Schizophrenia. A truly heartbreaking and a liberating song on the subject of mental illness.

Because of a long ranging experience that I had with a close family member, I found myself personally relating to this song. Especially the fear of becoming mentally ill through a hereditary connection. That fear is well articulated in the following lyrics:

“Just like the Father of my Father, time stole his mind
And I can’t forget one fourth of his blood is mine
I try not to worry…
Please don’t come for me
I promise I will be great
Just let me keep what’s mine”

The Lovell sisters hit it out of the park with this song that includes some pretty nifty Alice In Wonderland imagery. Definitely the most successful collaboration between the sisters and the Nu Deco Ensemble. It is my favorite song on the album in which the parting refrain gave this work its title.

The album shows the early Bluegrass and country roots of the Lovell Sisters with “Danger Angel and Tears of Blue to Gold.” Not to mention their Rock and Roll expertise with the closer, “Self Made Man.”

But the second masterpiece on Paint the Roses is the orchestral version of another song from Self Made Man, “Every Bird That Flies,” it is the sixth song of this seven song collection. An infinitely spooky song. This was a full length concert, by most accounts, and I hope that they will release more performances from this great concert.

Rebecca and Megan Lovell’s work on Paint the Roses are among some of the best of their recorded history. Rebecca has never been in better voice and Megan’s lap steel work is sonically gripping and moving. The Lovell sister’s harmonies have a deeply felt, sister cadence in their delivery. I wonder if they finish each other’s sentences?

I hope that they continue this profound sister cadence and keep providing us with excellent work like Paint the Roses. This album has made history in that it has made a strong appearance on both the Blues and Classical music Billboard charts. Where broad imaginations meet, great music is created.