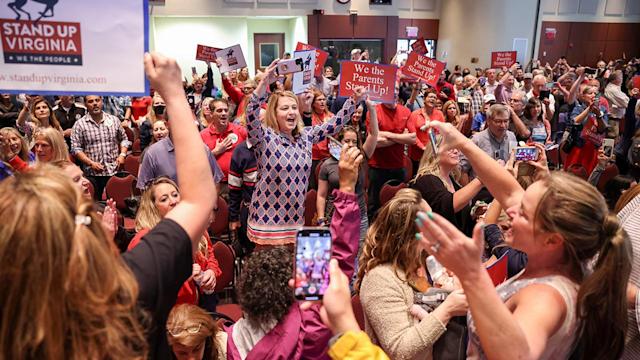 For months now we’ve heard the media spin the story of the Loudoun County June school board meeting into a weapon against concerned parents across the nation. But now the truth has come out about the cover-up of the sexual assault of a young girl and the school board’s (and media’s) silence about it. Below is a summary and analysis.

On June 22, Scott Smith was arrested at a Loudoun County, Virginia school board meeting, a meeting that was ultimately deemed an “unlawful assembly” after many attendees vocally opposed a policy on transgender students.

What people did not know is that, weeks prior, on May 28, Smith says, a boy, allegedly wearing a skirt, entered a girls’ bathroom at nearby Stone Bridge High School, where he sexually assaulted Smith’s ninth-grade daughter.

As a result of the viral video showing his arrest, Smith became the poster child for what the National School Boards Association has since suggested could be a form of “domestic terrorism”: a white blue-collar male who showed up to harangue obscure public servants on his local school board.

If someone would have sat and listened for thirty seconds to what Scott had to say, they would have been mortified and heartbroken,” Lancaster said.

Minutes before Smith’s arrest at the school board meeting, the Loudoun County Public Schools (LCPS) superintendent lectured the public that concerns about the transgender policy were misplaced because the school system had no record of any assault occurring in any school bathroom.

So in a nutshell:

Just in the last couple of days it has been discovered that this same boy assaulted another girl at a different school. Even the Washington Post couldn’t ignore it:

The parents of the victim of the first alleged assault issued a statement Thursday through the Stanley Law Group blaming school officials. They asserted that the charged youth is “gender-fluid” and that the incident occurred in a girls’ bathroom. Those details have not been confirmed by authorities.

What details? That the boy is gender-fluid or that it took place in a girl’s restroom? Notice they CAN’T deny the assault occurred. So screw any appearance of deference I gave to the Washington Post above.

Public records uncovered by the Daily Wire show Loudoun County Public Schools have failed to record multiple known incidents of alleged sexual assault in its schools since at least 2018, despite a state law requiring all alleged assaults and other statistics about school safety incidents to be reported to the superintendent and made available to the rest of the public.

In its public database, called Safe Schools Information Resource, Loudoun County Public Schools claimed Stone Bridge High School, where a ninth-grade female student was allegedly raped by a male student wearing a skirt in the female restroom earlier this year, had zero sexual assaults for the 2020-2021 school year. That male student is now being held in a juvenile correction center after he allegedly attacked another student at a different school a couple of weeks ago.

And in 2018, when three football players at Tuscorara High School were arrested and charged with sexual assault after they allegedly “held down” a younger player and “inserted objects into the victim” in a locker room, Loudoun County Public Schools still reported zero instances of sexual offenses in SSIR.

Who knows what else will be discovered as the layers are unpeeled. .

All of this is so despicable on several accounts:

I do not want to hear ANY leftist talk about how they care about women. That is a complete fraud (and always has been). They only care about women if it is advantageous to them politically. Ask Cindy Sheehan. Remember her?

If you’re still watching and believing what the left and the media are articulating, you’re worldview is totally screwed up. You have a responsibility as a citizen to inform yourself and your family. Take the time to do a little bit of research/checking to see if what you hear is the truth. And this includes ALL media, both right and left. If more people don’t start doing this they will soon lose their freedom. And then they can go look in a mirror to see who’s at fault for that.

Finally for parents of school aged children: Watch closely what your child is being taught. And if you have an issue with it (or anything else going on in your child’s school), attend the school board meeting and speak out. Don’t be intimidated by derogatory (and ridiculous) accusations coming from radicals trying to silence you. You are the ones who have control over your child’s well being and education, not government (as Terry McAuliffe thinks).

And for God’s sake turn off the news. A good TV show is less fictional than watching a news cast.

Superintendent Scott Ziegler apologized for saying during a June event that the Virginia district had no record of assaults taking place in its bathrooms. His comments came amid debate about policy changes related to self-identified transgender students. Ziegler said Friday that he misunderstood the question when he made the comment.

You have got to be kidding me?? The question is irrelevant. He stated CLEARLY that no assaults had taken place when they obviously had. He is either incredibly ignorant or lying profusely.

Ziegler also said he is “sorry that we failed to provide the safe, welcoming, and affirming environment that we aspire to provide.” He told affected students and families: “We acknowledge and share in your pain and we will continue to offer support to help you and your families through this trauma.”

Board member Beth Barts announced her resignation on Friday, though she didn’t say whether it was related to the ongoing controversy. “This was not an easy decision or a decision made in haste. After much thought and careful consideration, it is the right decision for me and my family,” Barts said.

It’s good that she resigned but it doesn’t appear she did so out of any sense of remorse. She saw the recall handwriting on the wall.

Every single one of these board members need to resign as well as the Superintendent. Every. Single. One.