“This country, with its institutions, belongs to the people who inhabit it. Whenever they shall grow weary of the existing government, they can exercise their constitutional right of amending it, or their revolutionary right to dismember or overthrow it.” –Excerpt from the 1861 Inaugural Address of Abraham Lincoln 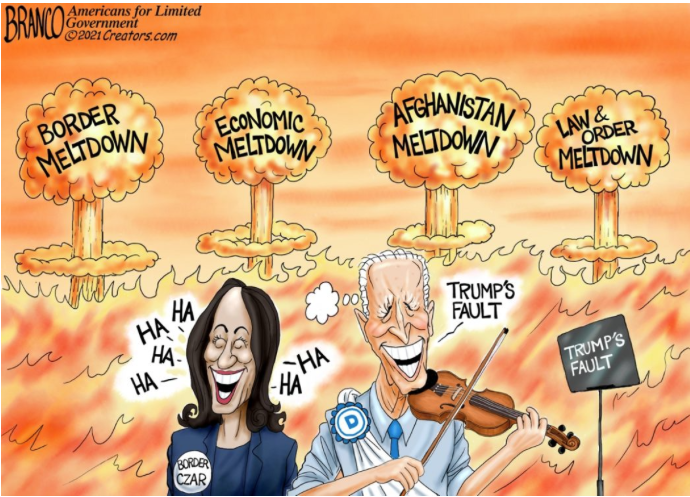 Hypocrisy and treasonous behavior abounds currently in Washington D.C. It is like a consumption killing our freedoms by degrees. In the Biden “royal” court, we as patriots, are witnessing the true Madness of King Joe and his sidekick, Kamala.

Traitor Joe’s behavior goes beyond dementia. It is a madness that goes beyond the foolish and inappropriate Joe that we have chuckled about for years. It goes beyond Hunter and the Ukraine. It is a madness where a very questionable president declares himself a faux Monarch. Liberty be damned in Joe’s world. A malevolence that is continuously reflected in Biden’s black beady eyes. A madness that is echoed in the lies of the left and the Stepford Media.

When you look at the players in this tragic play, their own black beady-eyed look comes up again and again as well. Pelosi, Schumer, Harris, Milley, Psaki, Bush, and Obama, among others, all have the same dark-eyed stare and arrogance in their countenance. Their darkness is plainly visible. It is palpable and malignant to a free America.

In my recent PolitiChicks article, The Definition of ‘Traitor’, I made a substantive argument that Joe Biden should not be impeached for his unconstitutional behavior but that he should be indicted for treason. As stated previously, Biden’s cowardly surrender to the enemy, abandoning our airbases, our military equipment, our personnel and our allies are arguments for the charges of treason. Biden is a war criminal with the blood of innocent children on his hands.

To deflect from evidence coming out about possible massive election fraud and the coup against President Trump, this evil Marxist regime exited Afghanistan in a manner that they knew would lead to a failed state with the Taliban back in power. Biden did what Obama did to create a refugee crisis and the migration of hundreds of thousands of Muslims to America and other countries.

After occupying Afghanistan, for 20 years, Joe ignores all his military Generals advice and pulls all the troops out before evacuation of all Americans and our allies. Biden cowardly surrendered and strengthened our enemy. This was a intentional act of treason against America.

The refugees coming into America from Afghanistan seem to be largely comprised of mature males. The thousands of Afghanistan males were not properly vetted. The Taliban were in charge of all the check points and determined who got through. This is alarming. What offends me is many of these men have brought underage brides with them. Is this not against the laws of America? Is this not the perpetuation of child abuse and much worse? Is the Biden administration committing crimes against humanity with the current Afghan refugee process?

In recent days, there have been allegations of rape and assault by some of these male refugees. I fear that more crime is to come from this mostly male and obviously not-in distress population. Why are the women and children not separated from these able-bodied men?

Additionally, in recent weeks Biden has issued a mandate for our citizens in response to his ongoing, unending “pandemic.” This is not only unconstitutional, but it appears unprecedented in our shared history.

Of particular interest, in regards to Joe’s mandate, is from Article Six, Section 3 which states as follows: “In no case should a collective community agreement or the consent of a community leader or other authority substitute for an individual’s informed consent.”

Clearly forcing anything regarding medical issues on all Americans against their will fails the 1947 Code on several fronts. As the voluntary consent of the individual is a must, Biden is in direct violation of the rights of our citizens with his monarch-like rules.

Joe Biden has not only become a mad, unconstitutional, malicious monarch intent on destroying America, he may very well be a terrorist without a costume. My biggest fear is that our own government has become the world’s biggest terrorist. We spent 20 years in Afghanistan training the Taliban how to become better fighters. Now, in 2021, Biden has made sure the Taliban are now properly equipped and he is flying in thousands of young Afghanistan males to military bases in America. Is this regime preparing America to be his battleground?

It is time for the American people to demand that Biden, Harris, Pelosi and Milley be removed from office for war crimes and treason against America. They have the blood of innocent children on their hands. Without a doubt, their removal would be a great start in bringing our country back to the people. If history continues to be written in its current misshapen manner, perhaps war crimes and treason against America will forever be known merely as a Bidenism.

When the Taliban Teamed Up With Bill Gates and UNICEF