The toll on our country has been traumatic, but nothing as it has been for our healthcare and first responders, the echoes of the unsung heroes. The harrowing cost to the global world and the United States of a politically 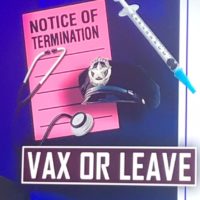 delayed response by our liberal autocratic despots. Democrats, RINOs, and the current Biden administration have profited from China’s CCP, pharmaceutical companies, and scientists that funded this “prophylactic” medication – the treatment was designed and used to prevent the virus from occurring – efficacy appears not to be the case today.

The pandemic has overwhelmed America’s healthcare systems, many were left under-protected, overworked, and increasingly vulnerable, even as they became the nexus between a frightened public and a misdirected government using this pandemic as a maneuver to distract from the reset of our economic and social foundations. Those in power believe this is our best chance to instigate stakeholder capitalism.

“As a global medical pandemic emerged, a great medical revolutionary action rapidly took place in a matter of days.” (“The Ultimate Sacrifice and the True Heroes of America …”) All our skilled healthcare professionals, Police, Firemen, Army Corp, FEMA, and our military personnel ramped up into action that only rivaled by a scale as massive as a Global War, a digital viral battle against the United States.

It was not just the doctors and nurses’ medical knowledge, but their understanding and compassion that ignited patients to bounce back in instances of nothing short of miracles; both nurses, doctors, and our entire field of front-line warriors have had to stay away from their own safe circles, the people they love. Amidst this battle of relentless infections, fearmongering from politicians, and death over the last 18 months the overworked and fatigued warriors have lent themselves for our salvation. Their sacrifices in unending numbers have enabled a slow recovery for the millions who were affected by the disease. A plague on humanity, lonely and isolated life for these doctors and nurses; the ambassadors of life.

Today these warriors need our prayers and support, our heroic doctors and nurses have had a chance to witness humanity in true form: selflessness, honor, heroism, and they were the ones that had to answer the call when no one else could and are now being threatened to take the injection or be fired. The megalomaniac Dr. Fauci and the liberal left government officials have demanded they oblige to their mandate. Let’s be clear a mandate is just a policy, not a law. These steadfast and unshakeable warriors most led by their Hippocratic Oath have seen too much death and destruction to the human body to subscribe to this mandate. With their knowledge, skills, and wavering reluctance, they have stood up and said NO.

The CDC, and the political machine who has provided a safe harbor for China and the political mandate to destroy our country as we know it for nothing more than greed and power. Capitalizing on the pandemic fear, governments and compliant mainstream media have used the lure of zero-Covid to induce obedience with harsh and arbitrary lockdown policies and associated violations of civil liberties, democracy under the lockdown of humanity.

America’s healthcare systems, hospitals, and first responders became the nexus between a frightened public and a misdirected government. Marxist federal and state governments have recycled this virus in several forms as a maneuver to distract and threaten the public. It is high time to start recognizing how foolish we all have been accepting their tedious and repetitive lying through the MSM.

Our unethical ignorant and superficial greedy politicians are power-hungry despots that robbed Americans of their faith in humanity, our hope, and our trust. How could we give them our confidence when they have repeatedly blatantly lied to us? These political tyrants are to blame for the deaths of millions and put in grave danger thousands of more American healthcare workers, military, police, firefighters, and paramedics in the line of fire. Today these gifted soldiers are facing a threat from these tyrannical rulers into getting this injection – they have seen first-hand that this therapeutic has compromised so many, why else would the Doctors, Nurses, and even Scientists that worked during the height of this pandemic are now refusing and willing to be fired to escape this “injection”? Thousands of workers have been terminated for non-compliance with the mandatory vaccination policies, which ironically appeared most severe for those really acting against the disease. #FightBack

Self-sacrificing doctors and nurses fought the invisible killer, pulling millions of infected patients out of death’s claws, nobody noticed how the threat had embodied, layered up, and prepared a deadly weapon that would execute thousands of them in a matter of days with no chance for redemption.

American people have been leaning back for two years, giving up their liberties and even fundamental human rights in exchange for the illusion of security and their freedom from lockdowns. While we did not mind giving up our freedom of assembly and movement, labor and worship, the government started to see us as an obedient herd of sheep.

While their profession bestows over them the highest ethical and moral obligations, workers have been pushing through unimaginable humiliation having to either prove their point to a collection of administrative bureaucrats and politicians and stand their ground to induce their termination, rather than commit to involuntary servitude. #HoldTheLine.

The condition for staving off their termination was to obtain medical or religious exemptions; the education, skills, experience, moral and ethical code, even the religious foundation regarding aborted fetal tissue. According to a investigation by Project Veritas, “Pharmaceutical companies will not broadcast the role that abortion-derived fetal cell lines played in the development of the COVID-19 vaccine; Pfizer has been identified as downplaying the role of embryonic cells.”

Medical directive should resolve the matter especially if your life decisions do not comply with the interest of bureaucrats. It is all about control over safety. The whole idea is humiliating and absurd in modern society, but those who initially did not comply with the “mandate” eventually, have lost their jobs. In other words, no matter how much of your time, effort, and health you have sacrificed in fighting and facing the disease every day, saving thousands of lives – your reward for not being compliant and obeying the mandate set down by merciless politicians is now costing you your jobs.

The political machines’ greed and power have all remained quiet while our country was battered by this silent weapon #COVID19. Will history look back at this era as the biggest war crime against Humanity”?

The biggest question is how far will the Biden administration push their stringent policies that go against all ideas of morality and liberties bequeathed to us by our Founding Father?