At 6:11 PM, Ernest Lee Johnson, a monster who murdered three people, two of them poor single mothers, with a claw hammer was pronounced dead. 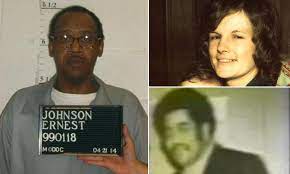 Despite the pro-crime lawfare that went all the way to the Supreme Court insisting that lethal injection would cause painful violent seizures, he died quietly.

That was more so than could be said for his victims.

On a cold day in a Missouri winter, Mary Bratcher never came home to the trailer park where the single mother lived with her three children. She was working that night as a manager at a Casey’s General Store in Columbia helping out Mable Scruggs, another single mother, making ends meet by picking up a night shift. Neither of the two women would make it home again.

An hour before midnight, Ernest Lee Johnson came in after a binge in which he bought three rocks of crack cocaine, traded one of them for a gun, put on a mask and came to rob Casey’s.

The plan had been to lock the employees in the back and have one of them open the safe. But then Johnson beat all three of the Casey’s employees to death.

He stabbed Mary Bratcher repeatedly through her hand with a screwdriver, likely defensive wounds as she fought the monster for her life. Then he smashed her over the head with a claw hammer again and again. Johnson appeared to be aiming for her face, striking her mouth and nose, to disfigure her while killing her. He beat Mabel to death in the same vicious way.

That was 1994. Like every monster, Johnson never had any shortage of defenders.

He was convicted and sentenced to death in 1995, but the Missouri Supreme Court intervened claiming that the jury should have heard testimony that the crackhead was actually suffering from “cocaine intoxication delirium”. The case went to a jury yet again which refrained from excusing the crackhead on the grounds that he had been high while murdering three people.

And then the liberal justices on the United States Supreme Court gave murderers on death row a gift with a decision falsely contending that executing murderers with intellectual limitations was cruel and unusual punishment. Any killer who could claim an IQ under 100 was home free.

Instantly every killer, no matter how cunning and clever, became retroactively retarded.

Johnson had plotted to rob the Casey’s safe, he had carried out the crime, and then tried to conceal the evidence. He was evil and high, but not stupid. But the Missouri Supreme Court threw out the decision again and a third jury found the crackhead guilty all over again. But by then over a decade had passed since the original murders while the families waited for justice.

Two decades later, Johnson was finally scheduled to die when the United States Supreme Court intervened, complaining that the monster who beat two women to death with a claw hammer might suffer “painful seizures” when he’s executed by lethal injection because he has a tumor.

Since then he found exciting new legal stratagems to delay justice, including requesting death by laughing gas and firing squad.

Justice Sonia Sotomayor, Breyer, and Kagan wanted to hear his plea for a firing squad.

“In addition to being near instant, death by shooting may also be comparatively painless. And historically, the firing squad has yielded significantly fewer botched executions,” Sotomayor ranted in her dissent.

Did the court’s wise Latina develop a sudden fondness for firing squads? No more than the rest of the delaying tactics that kept the bludgeoner alive this long.

Leftist lawyers and judges wage lawfare against the law and the victims to protect killers.

But now that Johnson is out of tricks, the Democrats have come to his defense.

Rep. Cori Bush, a former organzier for the racist hate group, Black Lives Matter, co-signed a petition demanding a commutation of Johnson’s sentence because it’s just like “slavery and lynching”. It’s understandable that Bush would take that position considering that Mary and Mabel were white women and their worthless lives don’t matter to Black Lives Matter.

Jones, an African-American man, had been the only caregiver for his mother and a disabled brother. When Johnson murdered him, he also took away the only helper left in their lives.

Johnson started out by shooting Fred Jones. But when the bullet didn’t kill him, the crackhead beat the store employee to death with a hammer instead.

Then he began the rest of his killing spree.

Fred Jones had been in the cooler, perhaps because as the only male in the store he was seen as more of a threat. And he may have resisted or tried to fight Johnson, leading the crackhead to decide to kill him.

The killer had shot Jones in the head. Then he beat him with the claw on the hammer fracturing his skull.

But his black life, like the lives of the over 5,800 black people who were killed in 2020, don’t matter to Rep. Bush and to Black Lives Matter. Only the lives of crackhead killers do.

Pro-crime lawfare had already put the families of Johnson’s victims through hell. When the Supreme Court decided to illegitimately intervene in his previous execution, the family members had already been there and waiting. Instead justice was denied to them for another six years.

Rep. Cori Bush claims that executing the killer of a black man is racist, the NAACP is rallying on behalf of the killer, not the victim, and Pope Francis has appealed to the “sacredness of human life.” Except the lives of Mary Bratcher, Mable Scruggs, and Fred Jones which are not sacred.

“This would be a crime against humanity,” Rep. Bush falsely claimed.

The crime against humanity was that Mary Bratcher never came home to her three children, that Mable Scruggs also never came home to her children, and Fred Jones never returned to his mother. But that is not the only crime here. The feverish efforts to prolong the pain of their family members in order to keep the monster who killed them alive is a crime against humanity.

And a crime against justice.

Every dirty trick, every fashionable legal trend, from mental disability to the supposed risk of side effects from death penalty drugs, had been enlisted in the crackhead killer’s defense.

“These death sentences are not about justice,” Bush and Rep. Emanuel Cleaver whined in their pro-killer petition. “They are about who has institutional power and who doesn’t.”

Which House members have spoken out on behalf of Mary Bratcher, Mable Scruggs, and Fred Jones? Do Bush and Cleaver even know their names? Does Pope Francis? I doubt it.

The institutional power that allowed the killer to escape justice for 27 years is on his side.

This is not about justice, it’s about who has institutional power. And it’s the killers who have all the power and their victims who have none. After Johnson got through beating three people, poor people, to death with hammers, lawyers and judges took up what he had left undone.

Hollywood, the media, and politicians keep pushing the big lie that criminals are helpless victims of the system. And yet they provide the best evidence of the vast institutional power that even the lowest and vilest killer can summon against justice and the families of his victims.