In the late 19th century, John Harvey Kellogg, a eugenicist and celibate vegetarian, became the leading health food nut of the era and along the way accidentally invented corn flakes. 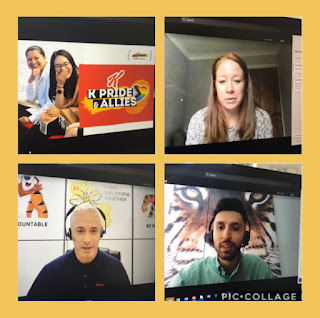 Back then Kellogg’s Battle Creek Sanitarium was a spa for the rich where patients got electric baths and enemas (the subject of a scathing parody in the book and movie, The Road to Wellville). These days, Battle Creek, Michigan is in much worse shape and Kellogg’s is the area’s biggest employer. But the corporation, like most of its multinational woke ilk, spends most of its time virtue signaling social justice while outsourcing American jobs.

The W.K. Kellogg Foundation, another of the multitude of hijacked radical foundations, is the biggest shareholder of Kellogg’s through the Kellogg’s Foundation Trust. The left-wing activist foundation had originally been founded as the W. K. Kellogg Child Welfare Foundation by John’s brother who idealistically but foolishly told his board, “Use the money as you please, so long as it promotes the health, happiness, and welfare of children.”

An example of the Kellogg Foundation’s promotion of the happiness of children is its Truth, Racial Healing & Transformation Implementation Guidebook which claims that “emphasizing individualism as opposed to a more collective ideology” is racist, and saying, “People are people. We are all alike regardless of the color of our skin,” is even more horrifyingly racist.

A century after John Kellogg’s involvement with the Race Betterment Foundation which called for a registry deciding who should be sterilized in order to improve the “race”, an idea later embraced by the Nazis, Kellogg’s is hopelessly racist. The only difference is that it traded eugenic racism against black people for social justice racism against white people.

Kellogg’s cereal pushes Ibram X. Kendi’s Antiracist Baby board book on parents to teach that even white babies are evil racists. “We know that by two years old children are already consuming racist ideas,” Ibram X. Kendi declared. That wasn’t true until he got started.

With some help from Kellogg’s.

But while Kellogg’s was working hard to promote the ”health, happiness, and welfare of children” by feeding them sugary cereals and teaching them that white people are evil, it was also busy wrecking the economy of Battle Creek, Michigan to make a little more money.

It didn’t count though because much of the Kellogg’s Battle Creek workforce is white.

Under CEO Carlos Gutierrez, later Bush’s Commerce Secretary, much of the operation was shut down and moved to Mexico. After that Battle Creek’s unemployment rate went from 3.9% to 7.5%.

“He knows exactly what it takes to make American businesses grow and create jobs,” Bush said of Gutierrez.

Which was true. Just in Mexico.

Since then, Gutierrez became Romney’s Hispanic chairman, and endorsed Hillary and Biden, but not until he created Republicans for Immigration Reform after turning on Mitt Romney for not being sufficiently supportive of replacing Americans. “I think we lost the election because the far right of this party has taken the party to a place that it doesn’t belong,” he huffed.

Maybe some Republicans opposed to endless immigration used to have jobs in Battle Creek.

The workers who do still have jobs in Battle Creek are on strike. 1,400 workers are now walking the picket line after Kellogg’s announced that it would cut 212 jobs

The local union president, a fourth-generation worker, said that they were tired of Kellogg’s moving jobs to Mexico.

“We work seven days a week, that’s what we do. In exchange for that, we live the American dream. At the end of the day, that’s what they want to take from all of us.”

Kellogg’s prefers the Kendi dream of getting rich by accusing Americans of racism while screwing the American working class. And it’s not just the American workers who get the shaft from the woke virtue signalers in the C-suite. A few years ago, Kellogg’s moved its cereal plant from Ontario to China. And it closed its Australian plant and shifted over to Thailand.

When Kellogg’s isn’t firing its American workers and trading them for foreign workers who will work for a fraction of the cost, it’s terrorizing its workforce with Equity, Diversity & Inclusion. While Kellogg’s won’t pay its workers fairly, it has hired a roster of diversity executives who make 4 times their salary to tell them how racist they are.

CEO Steve Cahillane responded to the drug overdose death of George Floyd and the subsequent devastating riots by the Black Lives Matter racist hate group by falsely claiming that there were “racial injustices” and declaring that “in North America, we cannot reinforce strongly enough our commitment to a diverse and inclusive environment”. In North America, maybe not as much in actual racist countries where Kellogg’s offers fewer “race conscious” classes.

“Kellogg recognized, along with the rest of the country and world, that we had entered a point of no return in terms of social justice,” a quote in Kellogg’s Equity newsletter screams. “What if we created a dialogue about the intersectionality of race and food?”

Or what if Kellogg’s stopped firing workers while telling them they’re racist?

While Kellogg’s touts the “Fight for Food Justice”, it treats its food workers like garbage. C-suite woke virtue signaling can cover up a multitude of sins. That’s why it’s taken over corporations. Instead of actually practicing ethics and decency, major corporations now hire diversity executives to assemble social justice word salads that make Corporate America sound like Che.

The more jobs Kellogg’s cuts at its Battle Creek birthplace, the more it talks about equity.

Kellogg’s boasts that it’s a Top 50 Company for Diversity and that diversity and equity are “paramount to achieving our success”, but the real secret sauce is cheap foreign labor.

An Amnesty International report accused Kellogg’s and a variety of woke food multinationals, including Unilever, the parent company of antisemitic BDS advocate Ben and Jerry’s, of getting palm oil from plantations where 8-year-olds worked under hazardous conditions.

While the C-suite virtue signals about social justice, children are dropping out of school to labor on plantations, women are working for $2.50 a day, and breathing in toxic pesticides.

“I don’t go to school,” a 10-year-old boy working on a plantation said. “I carry the sack with the loose fruit by myself but can only carry it half full. It is difficult to carry it, it is heavy. I do it in the rain as well but it is difficult…My hands hurt and my body aches.”

No one actually likes to see how the woke sausage or the cereal gets made.

“George Floyd and Ahmaud Arbery are among the many names burned into our consciousness,” Kellogg’s CEO Steve Cahillane declared.

Maybe the name of that 10-year-old boy or the fired Kellogg’s workers should be burned into his consciousness instead. But accusing America and white people of racism is cheap, running an ethical company is expensive. Just stop by Battle Creek or a woke palm oil plantation and find out how many children had to suffer and how many American workers had to lose their future so that Tony the Tiger could rot children’s teeth with sugar and their souls with racist wokeness.