While Vice President Joe Biden was in the White House, his son Hunter was allegedly trying to cut a huge deal with a $2 million payment and a possible 5% success fee as high as $750 million. All it would take was bringing together Communist China and the Muslim Brotherhood.

And who but a Biden could pull that off? 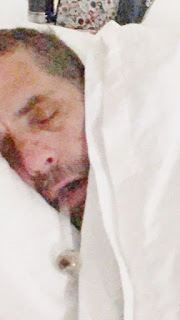 The UN Security Council sanctions that had been slapped on the Libyan Investment Authority during the civil war between Gaddafi and the Islamists were still in place years later because the Arab Spring had left the country in the throes of a permanent civil war with the Islamists.

The LIA’s wealth fund, now worth an estimated $68 billion, had been part of a deal cut between the Libyan dictator and the Bush administration. When Gaddafi abandoned his WMD program, and sanctions were dropped on Libya, the LIA quickly became one of Africa’s largest wealth funds, and bought big, investing in American companies, banks, and bonds.

Including billions in treasury bills.

When Sam Jauhari, a Democrat donor, sent the email, indicating that Hunter wanted $2 million to lobby on the deal, his father had long been seen as the gateway to all that wealth.

Jauhari, who had plowed $80,000 into the Obama campaign, and tens of thousands more into the Democrat machine, was allegedly an associate of Imaad Zuberi, a Pakistani who had been working on Libya with Biden’s body man and close friend. Earlier this year, Zuberi was sentenced to 12 years in prison for funneling foreign money into political campaigns in the United States. Among his alleged employers was the Qatari Islamic terror state and a prosecutor alleged that “U.S. policy was changed to align with Qatar’s interests.

Prosecutors say that Zuberi received $9.8 million from the Qatari state sponsor of the Muslim Brotherhood. He had also allegedly funneled hundreds of thousands of dollars from a Saudi Muslim tycoon to the Obama inauguration. His WhatsApp messages have him mentioning, “I need to get the 5 to 6 Clinton donation done by tomorrow” and “You want billions unfrozen. This is nothing. Iranians spent $150 to get $25 billion released.”

His recipient complains, “I spent 2.6 million before. What did I get?”

The first email about retaining Hunter Biden was sent in January 2015. In 2012, a Muslim Brotherhood alliance had conspired to take power through fraudulent elections in Libya. In 2014, the Brotherhood alliance, after repeatedly using Islamist militias to terrorize its rivals in Tripoli, lost new elections and declared that it would continue to govern anyway.

When the Hunter Biden emails were being sent, Libya had two rival governments, the Muslim Brotherhood in Tripoli and a more moderate coalition in Tobruk. The rival governments also staked their own claims to Libya’s wealth whose crown jewel were the LIA’s investments.

While the released court documents of Zuberi’s WhatsApp chats were censored to remove the names and identities of any of the players, he asks at one point, “Does the Libyans want me to introduce them to Turkish president?” Turkey was a strong backer of the Tripoli regime. It’s highly unlikely that political figures in the Tobruk government would have been looking for an introduction to their worst enemy. The Muslim Brotherhood however was backed by Turkey.

The Biden email however provides an even bigger clue when it notes that Hunter “said he has access to highest level in PRC, he can help there.”

The Muslim Brotherhood had gotten Obama and Hillary Clinton to intervene in Libya. That illegal invasion enabled them to take power, but as part of the crisis, sanctions had been imposed by the United Nations. And Obama and Hillary were not able to unilaterally lift those sanctions.

The sanctions had been imposed by the UN Security Council. And could only be lifted by it.

The People’s Republic of China had been a major player in Libya. When the civil war arrived, it sided with Gaddafi and once he was overthrown, Chinese oil companies were frozen out. Getting China to support lifting some sanctions would require a quid pro quo arrangement that would let the PRC’s oil companies and other businesses back into Libya.

Hunter Biden’s ties to CEFC China Energy and the gift of an eighty thousand dollar diamond have already been widely reported. A CEFC executive would later be accused of plotting to provide weapons to Qatar and Libya. Qatar was a major backer of the Brotherhood.

Even without Hunter’s diplomatic talents, China and the Islamist government came to terms.

But the China factor explains why the Libyans considered Hunter Biden as an intermediary at all. The Biden family was a perfect halfway point between the Muslim Brotherhood and the People’s Republic. Both the Islamists and the Communists had invested in the Biden clan.

What was really at stake here was a quid pro quo oil deal in exchange for the LIA lockbox of billions that had to be negotiated through the White House and UN Security Council members. It was a thorny problem which the Libyans still don’t seem to have cracked, and it’s unlikely that Hunter Biden could have managed to appease all the different interests if he had gotten the job.

The Zuberi messages mention that, “the negotiation is towards 3.5 to 4% or it will not fly… they said that they have 190 billion outside and they will not give 5%.” It’s not clear whether Hunter would have seen any part of that 5%, or whether the WhatsApp messages refer to any deal involving him at the time, but either way there was a whole lot of money at stake.

The Libyan civil war was not just ideological, but economic. The Arab Spring had become a vehicle for not only Islamist theological ambitions, but the economic agendas of its backers.

“Hey read the book Clinton Cash,” Zuberi told an associate. “This is how America work. How Washington work.”

It’s certainly how the Bidens work. In an already fetid swamp, the Bidens added a new layer of treasonous greed. Only the Bidens could have been up for potentially being hired by the Muslim Brotherhood to cut a deal with Communist China.

As long as the money from America’s enemies was right.