John Kerry, Biden’s climate czar, boarded a jet that emits more than every car you’ve ever owned in your lifetime, and jetted off to Tianjin, China for the latest UN Climate Conference. 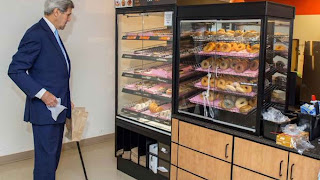 Tianjin is a Chinese port city with air quality that could kill a crocodile. It’s got smog, smoke, and some years ago hosted a massive fireball that killed and injured almost 1,000 people. A hellhole where the authorities have to tell women and children to stay indoors because the air is that bad was the perfect place for the Communist regime to show off its commitment to the environment.

And to sustainably humiliate John Kerry before dropping him into a giant compost heap.

Humiliating John Kerry has been a popular sport in Asia since before the Beatles broke up, and since then it’s been taken up by Latin America, the Middle East, and Russia, and many parts of the planet. But Asian Communists were the first to get started and they’re still the best at it.

As a preamble to his trip, Kerry penned an op-ed warning that the “Science on Climate Change is Blinking Red.” Then, with his science still blinking red, Kerry arrived at China’s filthy UN climate conference to get shoved into a locker while his shorts were pulled over his head.

The Biden administration promised that it would fix relations with Communist China by finding common ground on the climate. American and Chinese lefties would team up to save the planet.

How did the Communists treat Biden’s Special Presidential Envoy on Climate? They took him as a virtual P.O.W. and subjected him to struggle sessions denouncing America.

At the end of it all, Kerry could only mumble, “I will certainly pass on … the full nature of the message that I received from Chinese leaders.”

The message was crystal clear.

Chinese Communists don’t give a damn about the Western Left’s climate hoax except when it serves their interests. And the only way they’ll play ball is if Biden surrenders on everything.

Slumped underneath some Chinese art and a place card with his name in Mandarin over his name in English, Kerry was alternately threatened and berated by his Communist captors.

China’s Foreign Minister Wang Yi, who had previously welcomed the Taliban, accused America of a, “major strategic miscalculation towards China”.

Wang then brought the hammer down and warned that, “cooperation on climate change cannot be divorced from the overall situation of China-U.S. relations.” If Biden and Kerry want China to play their global warming game, they’re going to have to give in to China on everything else.

“He who tied the bell should untie it,” Wang demanded.

While that sounds like one of the less funny proverbs from Mao’s Little Red Book, the message was that the United States had ruined relations with Communist China, and needed to ring a lot of bells if it wanted the Commies to keep pretending the planet is about to explode.

Wang had a long list of things China wanted in exchange for helping Kerry with Earth Day.

These are the same lists the Communist regime has been thrusting on Biden officials at every meeting, none of them penned by Santa Claus, instead there’s the “List of U.S. Wrongdoings that Must Stop” and the “List of Key Individual Cases that China Has Concerns With”.

China’s lists mandate an end to all sanctions on the Communist state, on Chinese officials, including those involved in hacking attacks on America, on Chinese companies, and order America to open up to Communist infiltration by ending restrictions on Chinese students, including obvious PLA spies, leaving the Confucius Institute infiltration program alone, and also want a ban on pro-democracy protests outside Chinese diplomatic missions.

Blackmail has never been this green.

The bottom lines are that Biden must allow China to invade and conquer Taiwan, and any other place it wants to take over, and should not dare criticise China’s brutal Communist dictatorship.

Having John Kerry wait tables in a Shanghai dive isn’t officially on the list, but is strongly implied.

In a series of video chats, Chinese officials, who didn’t even bother to show up, told Kerry that the PRC would not be offering any new moves on global warming. The science might be “blinking red” for Kerry, but the only science that the reds are interested in is political science.

And that’s a science that John Forbes Kerry clearly failed.

When Kerry whined that “climate is not ideological, not partisan and not a geostrategic weapon”, his Chinese hosts could hardly keep from laughing in his hopeless face.

Everything is a “geostrategic weapon” to China. And nothing is to Kerry. That’s why he loses.

Communist China demanded that Biden drop sanctions over genocide and slavery before it would consider burning less coal.

Want China to use less coal? Buy their solar panels made with slave labor. To save the planet.

While the Communists are happy to sell the People’s Republic of California more worthless solar panels to charge electric cars that will soon be made with rare earths from the mines of Afghanistan under the Taliban, they’ve been financing coal plants around the world.

“We think that China can do more,” Kerry pleaded like Oliver Twist with a bowl of gruel.

The People’s Republic of China agrees that it can do more to extract concessions from Biden.

John Kerry came to China with an ambitious agenda and left promising to pass on all the threats and insults to Joe Biden as soon as his climate-killing jet gets him back to America.

“President Xi has been driving the climate agenda in China,” Kerry praised his new beloved leader like a prisoner freshly sprung from a struggle session. “He is very aware of every step we have been taking together, and I think it’s been a constructive process.”

Every breath you take, every move you make, Xi is watching you.

Kerry tried to put the best face possible (which is tough for a guy who’s been mistaken for a member of the Munsters) on his ritual humiliation in Tianjin.

“We made some progress,” he insisted, all evidence to the contrary. “In diplomacy, you don’t always get everything you want in one fell swoop.”

China’s Communist leaders offered Kerry nothing except slaps across the face. Not only wouldn’t they agree to any of the Biden administration’s climate targets, but their message was that China is already doing great on climate and can ignore America.

To rub salt in the wound, they delivered the message from a city that was once on fire.

Even if Communist China believed in the great climate scam, the environment is always a subsidiary to power and wealth for the regime behind such sustainable environmental triumphs as the Three Gorges Dam disaster and the Great Chinese Famine.

It’s a lot easier to talk Americans into living poorer, paying more, and losing their jobs by frightening them with an imaginary threat to the planet than to get Communist China to give an inch on climate demands unless it gets a foot out of it.

Biden, Kerry, and the Democrats claim that the planet will be destroyed without their bans.

Communist China is calling their bluff. If you really think the planet will burn, they say, what’s the harm in letting us conquer Hong Kong, Taiwan, and, for that matter, America. Does it matter if we have millions of slaves or concentration camps when the survival of humanity is on the line?

It’s a deal with the devil.

And Kerry left China on the familiar errand of conveying Communist demands to Americans.

The grand title of Special Presidential Envoy on Climate was really another way of describing what Kerry had been doing for 50 years, telling American leaders to surrender to Communism.