The Black Lives Matter movement and the allied criminal justice reform movement which opened jails and decriminalized crimes led to a nearly 30% surge in murders in 2020.

The 29.4% increase is historically unprecedented. 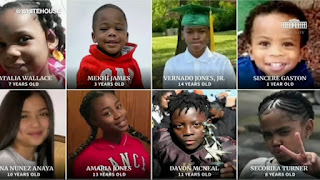 The worst one-year percentage jump in murders was a 12.7% increase in 1968 during a crime wave that led Democrats and Republicans to embrace tough on crime policies. 1968 was the year that LBJ signed the Omnibus Crime Control and Safe Streets Act into law. But the opposite happened in 2020 as Democrats and some libertarian Republicans colluded to dismantle the criminal justice system, open up the jails, and endorse Black Lives Matter.

The pro-crimers have the blood of thousands on their hands.

The FBI’s numbers are in and they show that Black Lives Matter and its corporate backers killed more black people in one year than anything short of an African civil war.

While people of all races were more likely to be murdered in the year of Black Lives Matter, black people were disproportionately likely to be killed as a result of police defunding and the George Floyd Effect, as well as the pressure on the justice system to open up prisons, free criminals, and stop arresting new criminals in the name of fighting for the big lie of racial justice.

The 62% increase in the murders of black people should be the headline in every single media outlet which currently treats the lack of black classical musicians or chefs as a major crisis.

While statistics like 135 “unarmed” black people being shot by police in 5 years becomes a cause for massive riots, violent assaults on innocent people, and the defunding of the police, a 62% increase in the murders of black people won’t even get a mention from the same media which regales us with claims that car accidents are racist because of disproportionate impact.

The 62% increase in the murders of black people is the biggest disproportionate impact statistic.

If the 2,244 black people had been shot by white people, Asian people, or Republicans, we could talk about it. Indeed, the odds are that we would never talk about anything else. Ever.

But unfortunately it’s the devastating result of black-on-black crime.

Black perpetrators were responsible for 5,832 murders or approximately 50% of the murders despite making up only around 13% of the population.

White people and Latinos who make up 76% of the country accounted for 3,981 homicides or 34%. American Indians were responsible for 116 murders and Asians for only 65 murders.

Black people both commit murders and are the victims of murders at disproportionate rates.

There is no escaping these facts.

Coddling criminals and defunding police hurts people of all races, but black people are the ones suffering the worst from the gang members and criminals in their communities.

That is exactly why it was black communities who originally championed a crackdown on crime, why the NAACP had originally demanded the death penalty for drug dealers, and why black people are still far more likely to oppose police defunding and other pro-crime measures.

Even in the one category of violent crime, rape, that decreased overall in 2020, that was true of every group except one where the number of black rape victims defied the trend.

In Israel, the hashtag Arab Lives Matter took off after the rise in arab-on-arab crime to demand that Israeli police stop the criminals. In the United States, Black Lives Matter is a demand that the police allow gang members to shoot up black neighborhoods with no interference.

The additional 2,244 dead black people are a tribute to Black Lives Matter’s efforts.

While Robin DiAngelo cashes in preaching the cult of anti-racism, and suburban white liberals search their souls for systemic racism, what’s really destroying black people is in the numbers.

5,839 black people were murdered in one year.

Homicide doesn’t even make the CDC’s top 10 causes of death for men in America, but it’s number four for black men. In 2017, it caused 5% of the deaths of black men, more than strokes, diabetes, or most diseases. The only things more likely to kill black men than black-on-black crime are heart disease, cancer, and accidents.

Among black men under the age of 20, homicide is the leading cause of death at 35.3%.

Only at the age of 65 does homicide drop out of the top 10 causes of death for black men.

There are no such numbers among any other group, including black women. They reflect a high rate of gang violence, drug dealing, and violent crime among a subset of black men. This crisis is not news. There has been ample research on the subject going back generations that the new wokeness decided to shut down, suppress, and penalize anyone who mentioned it.

In 2020, the Left used George Floyd’s overdose death to initiate a massive cultural revolution, supposedly on behalf of black people, but in reality to spread terror and seize power.

Just as the proletariat paid the price for the leftist revolutions conducted on behalf of the working class, black men are paying the price for the latest revolution being waged on their behalf. The people paying the price may be ordinary, or they may be gang members themselves. The dismantling of the criminal justice system also led to an unprecedented expansion in crime that recruited a generation of black teens into drug dealing, robbery, and carjacking. The police now routinely arrest armed carjackers as young as twelve years old as part of the new crime wave.

Even if a new anti-crime consensus is forged between conservative Republicans and moderate Democrats who shed the madness of criminal justice reform, the damage will be hard to fix.

Cracking down on crime increased property values in black areas, led to a growth in black small businesses, and made it more possible for black teens to go to college, and earn higher incomes. Black Lives Matter calculatedly undermined many of those achievements. The teens whom teachers’ unions kept out of school, joined gangs, and began to deal and steal will find it much harder to build stable lives. The women they might have married and the families they might have built are more casualties. It is hard to build things, but all too easy to break them.

The 5,839 dead black people are just the most obvious sign of the social wreckage.

While black people are the biggest victims of black crime, they are not alone. As these statistics show, we all pay a price. Some pay it directly in the forms of murders, muggings, and assaults. But we all pay for the social cost indirectly through our taxes, the price of goods and services, the cost of insurance, the broken social compact and lack of trust, and the diminished future of our cities and our country. The criminal justice reform movement, like all leftist propositions, was based on ignoring everything we had learned from the past about crime and how to fight it.

The Black Lives Matter movement terrorized cities and became the official dogma of Corporate America. Every major institution began accusing itself of systemic racism and purging itself.

Meanwhile thousands of black men died in the streets of major cities. The CEOs and university presidents heard the death toll reported on the evening news and paid no attention because it was taking place in neighborhoods and housing projects that they would never set foot into.

Now the sum total of the carnage is in. 5,839 black people killed. 2021 is on track to see more elevated murder rates. The question is how many black people have to die until the big lie of systemic racism, the scam of anti-racism, and the criminal justice reform killing fields end.