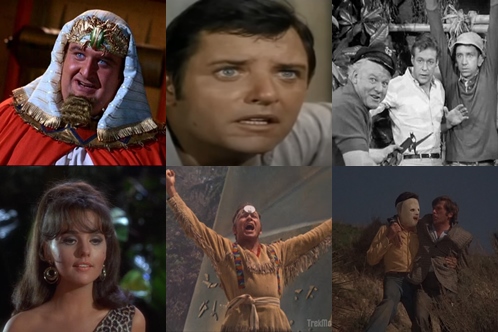 “When we last left Conoga Falls, the amnesia epidemic had been all but forgotten…”

This was the opening narration of one of the classic “As the Stomach Turns” skits on the Carol Burnett show. And in classic television, this epidemic was real. In the 1960’s and 70’s many shows invoked the plot line where someone forgot their memory. It often gave the actor or actress who was the victim of it a chance to break out of their normal character personality. And most often the cause of it was a simple blow to the head. As was the solution. So the old phrase “Bonk bonk on the head” could have been a short quip to describe the entirety of the whole amnesia process.

Here are some examples of this epidemic.

Batman: Speaking of getting bonked on the head, every episode revolving around King Tut utilized this strategy. Poor Professor William McElroy was constantly suffering blows to the old noggin (POW…BAM!) which made him think he was King Tut. But then he would suffer a “counter” blow (WHACK…THUD!) and presto he was back to his old self.

There was also an episode where the villain totally wiped out Batman’s memory. Luckily Alfred was nearby and drove him back to the Batcave where he hooked him up to a machine ant restored his memory.

The Big Valley, “The Man from Nowhere”: Jarrod Barkley is thrown from his horse in an accident and forgets who he is. He is taken in by “squatters” who help him (a woman, her mother in law and her son). The woman wants Jarrod to defend her from cattleman who are trying to run her off the land (ironically Jarrod had been hired by these cattleman in legal action against her). Of course in the process a romance starts to develop between the two. The climax comes when Heath and Nick arrive looking for their brother. A fight ensues during which Jarrod grabs Heath’s gun – the gun Jarrod had bought for him. Slowly Jarrod remembers who he is and the three have a tearful reunion. It’s one of the best scenes in the BV series (you can see it here at the 7:00 mark).

Gilligan’s Island, “Forget Me Not”: The Skipper suffers a blow to the head from a pole (thanks to Gilligan) and is hit by the amnesia bug. The Professor tries to cure him with hypnosis. First he accidentally takes him back to his childhood:

Then he tries to bring him forward in time and takes him to World War 2 and the Skipper sees everyone as Japanese soldiers. Even Ginger!

Skipper: Hey, how come you talk like that?
Ginger: Like what?
Skipper: Well, like a woman.
Ginger: Being born that way helps.
Skipper: You’re one of those ventriloquists. You sound like a woman but you look like a Japanese soldier.
Ginger (sashays around): Skipper, isn’t it obvious that I’m a woman?
Skipper: That’s… a nice try but not quite good enough.

Gilligan’s Island, “The Second Ginger Grant”: This time it’s Mary Ann. She falls and is knocked unconscious. When she awakes she believes she is Ginger! She starts acting like Ginger and wearing all of her outfits (and believe me, no man who has ever seen this episode has has forgotten that!). The Professor once again attempts to solve the issue with hypnosis. And screws it up again! Now, Gilligan thinks he’s Mary Ann (“When I hear the name Mary Ann, I will BECOME Mary Ann”). Mrs. Howell has a particularly tough time understanding all this:

Mrs. Howell – I understand everything perfectly! Ginger isn’t Ginger anymore because Mary Ann isn’t who she was when Ginger wasn’t who she is, isn’t that right, Skipper?
Mr. Howell – Skipper? I’m your little darling Thurston-poo!

At the end, Mary Ann falls again and this time wakes up in her own mind and body. WHEW! And I think this is the last time the Professor tries hypnotism, thank goodness.

Star Trek, “The Paradise Syndrome”. While investigating a planet where the inhabitants appear to be Native American Indians, Kirk loses his memory and is hailed as a God named Kirok. The perfect role for William Shatner! Kirk falls in love and marries a woman named Miramanee. But Kirk is no God however, and when he is exposed as such they begin stoning him and Miramanee. Spock arrives in time to save Kirk and restore his memory through a mind meld (the most unique and effective way of memory restoration). But Miramanee sustains too many injuries and dies (along with their unborn child) in a emotional scene ending the episode.

The Incredible Hulk, “Mystery Man”: One of the best episodes of the Hulk series. David Banner loses his memory in a fiery car accident and is then paired with his nemesis, Jack McGee on an airplane ride (with Banner wearing a facial bandage mask from the fire of course). The plan crashes deep into forest land and Banner and McGee are suddenly in a life and death struggle to survive from an approaching forest fire. Banner recovers his memory yet continues to help McGee. There is a great scene where McGee explains what the Hulk means to him:

Banner: Why do you want the Hulk so badly?
McGee: Because the Hulk means escape. It’s the biggest story of the 20th Century. I could pick up a Pulitzer for Journalism. More importantly I could get off the Register. I could stop banging out ‘pap’ for the supermarket masses. I could get my column back, write real stories, important stories, I could BE SOMEBODY!

As the forest file engulfs them, Banner turns into the Hulk and McGee sees him change. This is a critical moment in the series. Up until that moment McGee’s character thought the Hulk was a creature that moved around from place to place, never knowing it was a normal man that changed into the creature. This was an important progression in the series and opened up many possibilities going forward.

Wonder Woman, “The Boy Who Knew Her Secret”: While investigating an alien force in a small town, a young boy sees Diana transform into Wonder Woman. But so do the aliens. They capture Diana and hypnotize her to forget she’s Wonder Woman. Luckily the young man was a very nice boy and helps Diana remember her secret and keeps it confidential. I always thought the idea of hypnotism to wipe out Diana’s memory of being WW was pretty interesting and unique. BTW, in full disclosure, I once met Lynda Carter in person and when she asked me my name I momentarily got amnesia myself and forgot who I was!

I am sure there are others but at the moment I can’t seem to recall them! (I think the Lynda Carter reference has disturbed my thinking pattern for the moment).

What are your favorite “amnesia” episodes?