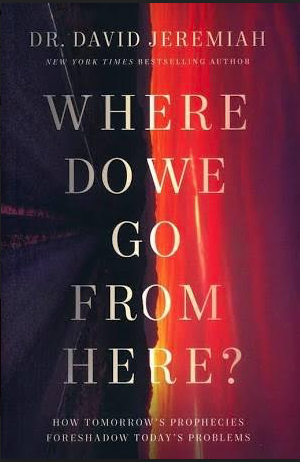 David Jeremiah is a noted theology teacher and pastor whose books and TV broadcasts have reached millions. Especially noteworthy have been his messages on the “End Times”, a topic many pastors avoid due to the controversies involved. However, we live in a time when current events have more of us thinking about that subject than ever before. Dr. Jeremiah is not a politician and his book Where Do We Go From Here is not designed to be political, however you cannot study the book of Revelation without thinking about what is going on in our world today. The last few years in the United States and the rest of the world were foreshadowed in Revelation as you will read in this outstanding book

Having taken classes in it, I know personally the controversial nature of the Book of Revelation. There are actually so-called Biblical teachers who have downplayed its value as largely symbolic. I tend to take the evangelical view that Revelation, like the Bible itself, is the word of God. And following the news on a regular basis there seems no doubt in my view that things prophesied in Revelation are unfolding now. No, we are not in The Tribulation yet as described in the Bible. Rapture, the “Taking Up”, comes first. But we are seeing a foreshadowing of what is to come. The loss of freedom, persecutions, and the pandemic should warn us of what is ahead.

The book is divided into multiple sections: Socialism, Globalism, Pandemic, Economic Chaos, The Falling Away, End Times People, Cancel Culture, Spiritual Famine, Jerusalem and The Triumph Of The Gospel. They all blend in together. As one who taught history and government for many years, I found the writing powerful and space limits me covering all the book deserves. I do have to emphasize Socialism, and a question with an answer that will offend a lot of people. Polls show that a rising number of Americans have a favorable opinion of Socialism, a large percentage of 18 to 24 year olds. It makes me wonder what they are teaching these days. The question is, can you be a Christian and a Socialist?  The answer is a resounding NO.

Socialism is very opposed to Christianity and this is a definite tenant to Communism as designed by Karl Marx. It is seen as the enemy of the people who, in theory, should run everything. However that can only be done if you have a Hitler, Stalin, Mao-type leadership to control the thinking and day-to-day lives of the people. Cancel Culture is a part of that with the rewriting of history. Perhaps the best book ever written on the control of past history was 1984 by George Orwell. We see this going on today with the movement to take our schools away from the needs of parents and the community, as they were originally intended to be, and turned over to bureaucratic school boards and teacher unions. The CRT curriculum would rewrite American history to the advantage of a Socialist agenda.

There is also an attack on Israel in the works as the attempt to have globalism take over all nations has begun. This, too, is described in Revelation, with leadership taken by The Beast and the AntiChrist. Together, they will rule the world of the future.

The Pandemic is also dealt with in this book, as leading into the Tribulation there will be plagues and pestilences. We are just getting a sample of this now, and some ‘scientists’ are predicting a new ‘pandemic’ worse than Covid-19 in the next eighteen months.

The Pandemic has also revealed a sample of something else in the works: The Mark of the Beast. As described in Revelation, our economic system can easily come under control of the Mark of the Beast which you must have in order to buy and sell. A sample of that is that there are now government leaders here and throughout the world who, through mandates, are saying you cannot buy from certain places or even hold a job unless you carry that little card to prove you have been vaccinated. That is not to say that Joe Biden, who pushes the use of mandates, is the antiChrist–but we do get a scary view of what is coming.

We are also getting more reports than ever before that Christianity is under attack worldwide. Christians are being persecuted and killed for their faith and this, too, has been predicted.

That does not mean that all hope is lost. The end of the book points out, as does Revelation, Jesus Christ and believing Christians will win. This whole world as it is now will be gone. However, as Paul tells us, we must “keep the faith” and “fight the good fight.” More importantly we must follow “The Great Commission” as given us by Jesus, to spread the Gospel throughout the world. There is a new Earth and a new Heaven coming that is already being planned for us.

Where Do We Go From Here is available HERE on Dr. David Jeremiah’s website, where you can not only get the book but also study guides, a set of DVDs or CDs and more. It also may be purchased through Amazon. We must be prepared.