A photo of Major General Chris Donahue spread all over the social media and news portals last week. He was announced to be the last American soldier who left Afghanistan after a 20-year war.

September 11 2001, terrorists struck America.  “Al-Qaeda operatives hijack four commercial airliners, crashing them into the World Trade Center in New York and the Pentagon in Washington, DC. A fourth plane crashes in a field in Shanksville, Pennsylvania. Close to three thousand people die in the attacks.”

President George W. Bush at that time promised to “win the war against terrorism,” and that is what led us to Afghanistan. In late 2001, the United States supported by its close allies, marched into Afghanistan and collapsed the Taliban government.  At that time, Bush called for the Taliban to hand over Osama bin Laden and expel al-Qaeda. That was 20 years ago.

Today, on the eve of the 20th anniversary of one of the most horrific terror attacks in the history of humankind, people hardly feel any less scared, confused, or shocked, than they did watching the Twin Towers go down on 09/11/2001.

They say that the war is not over until the remains of the very last soldier are identified and appropriately buried. But today, it seems that the war is over simply because they say it is over.

However, the facts, eyewitness testimonies, and inconsistencies in official reports may indicate that the Biden Administration’s sloppy reckless troop withdrawal and the suspicious overnight seizure of power by the Taliban are only the beginning of a crisis that humanity might have never seen before.

No conciliation or closure can be achieved through cruelty. And cruelty is what the past several weeks were all 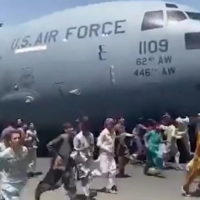 about. For most of us, the realization had started with the shocking images of people trying to flee the country hanging from the chassis of a US military plane a C17 with an “ironic” hull number 1109. (#9/11NeverForget)

Still hardly anyone, even the top military brass at the Pentagon and Washington really understood what was going to happen at the Kabul Airport the day before with the Taliban surrounding the capital. Even as Biden was telling the American people that the “Fall of Kabul” was likely to fall, intelligence assessments and reports painted a much grimmer picture of the Afghan military – would collapse. Afghan security forces would be part of the chaos during the evacuations of Americans in Kabul, which likened to be similar to pictures of the ” Fall of Saigon”.

The panic and chaos that engulfed the Airport after the news that the Taliban entered Kabul and seized total control led to the fact that evacuations turned into a vicious slaughter, where Afghans pushed their way towards the aircraft over the heads of American citizens, some of which were women and children that were clutched in their mothers arms. When the bombs exploded in the Kabul Airport, most were shocked, terrified, but sadly, not surprised.

On August 25th, the US State Department issued a warning to US nationals to avoid traveling to Hamid Karzai Airport. A marine present at the attack scene had later disclosed that the Taliban enforcement let the suicide bomber pass through holding back the Americans that were scheduled to leave early that day. The assassin was only stopped by the US Marines, who didn’t let the assassin into the perimeter. Eventually, within minutes he detonated the bomb next to a crowded Abbey Gate of the Airport.

The fact that the Afghan President Ghani had a secret meeting with the Biden administration only several days before the tragic events, his preparedness to flee Afghanistan with millions of American dollars with him, and the follow-up claim only proves the fact that both the US and Afghan administrations knew what was going to happen, and were perfectly prepared for the course of events and aware of the consequences.

Drumbeat of warnings over the last 6 months that the Biden administration continue to ignore, what we now know was that the Pentagon had activated a rarely-used protocol to compel airlines to provide aircraft to help fly Afghanistan evacuees, more than eighteen aircrafts from American Airlines, Atlas Air, Delta Air Lines, Omni Air, Hawaiian Airlines, and United Airlines transported people out of the country to military bases in the US. Why? Our military certainly has the power and the resolve to never leave an #Americans behind, it seems this was planned.

Several hundred Americans, including at least 30 California children remain as we are still uncertain of how many Americans went into hiding to remove themselves from the line of fire. While private chartered planes were being dispatched because our Government never authorized our military planes to wait until all Americans were boarded and secured. Currently, these chartered planes are being held in Afghanistan because OUR State Department has refused entry into the United States. The administration stated that not all of the passengers were vetted, however the 50,000+ Afghanistan refugees were allowed to board our military planes – destination the United States, without vetting.

“U.S. Rep. Michael McCaul (R-Texas) told Fox News Sunday the flights are being held because the Taliban wants the U.S. to recognize them as Afghanistan’s legitimate government. The six private planes were chartered by Christian conservative media host Glenn Beck’s Nazarene Fund and Mercury One charity. The Taliban grounded the flights after a breakdown in negotiations with the U.S. State Department, according to an NGO official.”

These Planes from the United States with Americans on tarmacs are being blocked in this battle between the State department administration and the Taliban. Afghanistan evacuees have lost everything, our Americans, those that risked their lives to fulfill the evolving edicts in a U.S. campaign in Afghanistan – have been left and those Americans are condemned to die there without our intervention from the State department. As they become hostages once the Biden Administration turned their back and “left them behind”, and the only currency the Taliban knows and is willing to leverage is their lives.

At the same time, more than 50,000 Afghanis have arrived at Michigan, Minnesota, and Wisconsin in military aircraft and commercial aircrafts chartered by the Pentagon itself. Some of these refugees may have had visas but most have no documentation at all. We also don’t know how many Taliban insurgents had infiltrated that crowd and who is their next target on American soil? Since images were leaked that Afghani men were seen grabbing families and shoving them out of the way so they can take their place on board…what is ahead during the next few weeks?

We only know for sure that this battle is far from over, and the worst maybe yet to come.

Barry Shaw: Biden is Turning on Israel. Here's Why.