September 2021, marks my sixth anniversary as a writer for PolitiChicks, an online magazine envisioned and fully realized by women, in particular, Ann-Marie Murrell and Morgan Brittany. This is the home where I found my own voice as a writer. Originality always grows in a safe harbor and my own talents have grown here.

In my music, as a writer, historian and Bluesman, I became fully aware of the importance of women in the history of the Blues early in my listening to the form. The Blues in America got its kickstart with a woman. The first recorded Blues in America, specifically by a Black American, was by the Classic Blues Singer, Mamie Smith. This happened in August 1920 with a set of songs that included “Crazy Blues.”

Before Eric Clapton or Robert Cray were romantic gleams in their mother’s eyes, Crazy Blues was the first million selling Blues song, as recorded by a woman. Mamie Smith’s success prompted the recording industry to start recording Blues on a more full time basis.

What I hope to accomplish here is the first of a series of two women artist profiles–women in the Blues that may not be as popular as a Bonnie Raitt or an Etta James. Yet, these are artists that have expertise, soul, and originality in their approach to one of America’s greatest art forms, The Blues.

I am a huge fan, and an apt player myself, of Blues slide guitar. It is a Delta Blues technique with roots in Africa. Where the player uses, generally, a metal cylinder or glass bottle, usually tuning the guitar to a chord. In turn, the slide is used to fret notes normally done with one’s fingers. A slide produces a human sound; some say almost a cry.

I am also a great fan of the many women who play or have played guitar using the slide. The roots of women playing slide guitar, comes from ladies like Kate McTell, wife of Blind Willie McTell and allegedly a great player herself. Continuing on we have ladies of the slide like the late Jo-Ann Kelly, Rory Block, Joanna Connor and Bonnie Raitt, among others. The women profiled here, Donna Herula and Larkin Poe, both are using slide guitar, in one form or the other, as an integral part of their music. 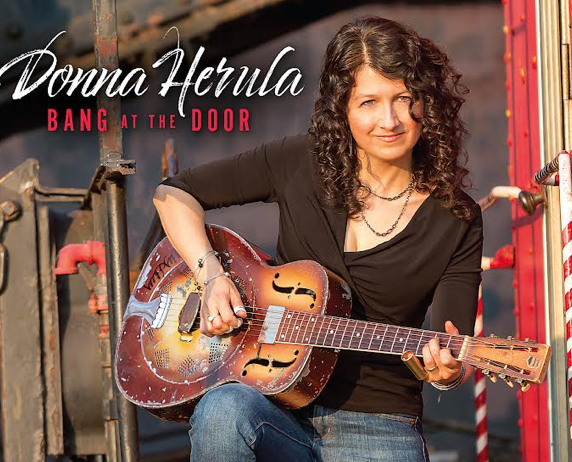 I have known Donna Herula for about 10 years since we connected on Social Media. We discovered that we both had a great appreciation for the West Helena Bluesman, Robert Nighthawk. Nighthawk had a slide style that almost oozed out of his guitar. Additionally, Robert Nighthawk was a great influence and teacher to Chicago Blues legend, Muddy Waters.

To paraphrase her official biography, Donna Herula is a Chicago born musician with a great passion for Delta, Country and early Chicago Blues. She also demonstrates an apt expertise with Folk and Americana musical forms. Her songwriting gives credence to her influences and also provides a contemporary and fresh perspective.

Many Blues guitarists in the 1920s and 1930s, such as Son House, Bo Carter, Tampa Red, Blind Boy Fuller and Bukka White, among many, used resonator guitars. These guitars are louder than the standard acoustic guitar. This made them a handy tool for the street corner performances of these legendary players as they earned a living. Resonator guitars could also cut through the din of a Southern Juke Joint.

On a side note, I took slide guitar lessons, in the 1970s, with the aforementioned Bukka White. The sound of his National resonator guitar would go right through me, giving me shivers. Bukka was the older cousin of B.B. King and an early influence on B.B.’s playing.

Donna Herula was inducted into the Chicago Blues Hall of Fame in 2016. During that same year she was featured in Acoustic Guitar Magazine in an article, “Down and Dirty: 10 contemporary resonator players talk about their love for that nasty sound.”  She spoke eloquently about her love for resonator guitars. In April 2018, she was featured in an article in Blues Blast Magazine, “Chicago Blues Guitar Women.”

Herula regularly teaches guitar at the Old Town School of Folk Music in Chicago. She has participated as a teacher in many Blues in the School’s programs and has taught guitar at many guitar camps such as the notable Great Guitar Camp in North Carolina.

Depending on the venue, she performs solo, in a duo with her husband Tony Nardiello or with her band. Her influences range from Son House to Lucinda Williams. Personally, I find Donna’s vocal style to be very close to the great Memphis Minnie (Minnie was an exceptional Blues guitarist and vocalist. Minnie was also the composer of the classic song, “When the Levee Breaks,” as appropriated by the British band, Led Zeppelin)

Donna Herula has released three self produced CDs. They are as follows: “Donna Herula (2009), The Moon is Rising: Songs of Robert Nighthawk (2011) and Bang at the Door (2021)” Bang at the Door was recently nominated for a 2021 Blues Blast Music Awards for Best Acoustic Blues recording.

I really like Donna Herula’s music as it embraces the tradition of the Blues as well as tackling subject matter that is firmly within the framework of the day. You can purchase her music via CD Baby and all media outlets including Spotify. 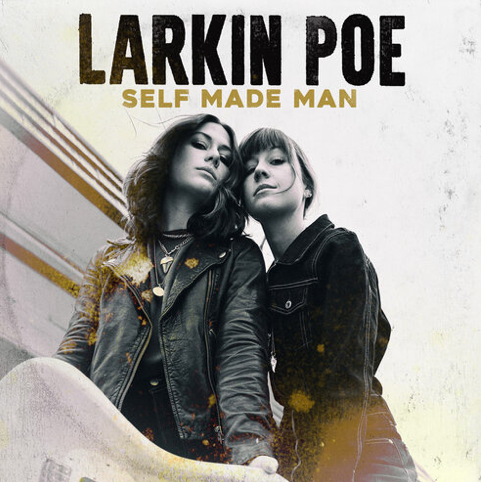 One of the musical acts that was part of my soundtrack for the lockdown was a two sister team named Larkin Poe. Larkin Poe is comprised of Rebecca Lovell, on Lead vocals. Rebecca also plays electric & acoustic guitars, mandolin, violin, banjo, piano, programmable drums and does much of the arrangements.

She is joined by her older sister, Megan, who plays lap steel, dobro and contributes succinct harmony vocals. Megan is a wonderful musician with her utilization of the lap steel. She is as good a slide player as anyone out here in the world of Blues or Blues influenced music.

Rebecca and Megan had an eclectic musical upbringing in a household that embraced many genres of music. The Lovell sisters started their musical career in 2005 with the formation of a Bluegrass/Americana group, the Lovell Sisters. This trio was formed with their older sister, Jessica.

They produced two well-received, self-produced albums and toured extensively and successfully for four years. They appeared on programs such as A Prairie Home Companion, The Grand Ole Opry and the Bonnaroo Festival. In December 2009, the Lovell Sisters disbanded.

In January 2010, Rebecca and Megan regrouped as the band, Larkin Poe. The name, Larkin Poe, comes from their great-great-great Grandfather. Larkin Poe was a Civil War wagon driver and who also was a distant cousin of the famed writer, Edgar Allen Poe.

Over the course of the next three years Larkin Poe released 5 independently produced EPs, two collaborative albums with Thom Hell and Blair Dunlop, respectively. They also released a live performance DVD. I am a great admirer of the work ethic of Rebecca and Megan. Their closeness as sisters and the early recording and roadwork of the Lovell Sisters trio obviously determines that discipline. I feel that they are each other’s creative barometer.

In 2013, Larkin Poe signed a deal with RH Music the music division of the San Francisco based company, Restoration Hardware. Since 2013, they have released six albums, with the 2020 works, Self Made Man and Kindred Spirits, being their most recent albums.

Larkin Poe has been called, at times, the “Little Sisters of the Allman Brothers.” I think that is due to the distinct presence of the slide guitar in their work. Yet, I hear echoes of their early Bluegrass background in some of the arrangements on their albums.  There is also a distinct Rock and Roll edge and attitude in their work and performances.

Where they tug on my heartstrings is in their interpretations of works of Blues masters like Son House, Robert Johnson and Leadbelly as done with stunning beauty on their 2017 album, “Peach,” as well as applied brilliantly on some of their other works. They have a large following in the Blues community and were a featured act at the 2019 Chicago Blues festival. In the past few years, they have crossed over to a diverse audience, including this writer.

For me, their two 2020 albums, “Self Made Man and Kindred Spirits,” were articulations of fully realized artists. The majority of the songwriting is done by Rebecca Lovell. Her lyrics betray a depth and wisdom that is breathtaking on the album “Self Made Man.” There is a contemplation of the human soul that is moving and quite mature. The album “Kindred Spirits,” is an entire album of covers of artists like Robert Johnson, Eric Clapton, Elton John and The Moody Blues, among many surprises that is entirely original in its arrangements and execution.

Their vocal harmonies and the lead vocals of Rebecca are almost worth listening to by themselves, but Megan’s slide guitar would be missed. Also missed is their sympathetic utilization of fellow musicians and collaborators in their work.

Speaking of collaborations, in 2021 Larkin Poe released a live single that is a new favorite of mine. It is called, “Sometimes.” This is a collaboration with the Nu Deco Ensemble, a Miami based group that bends genres of music in a highly stimulating fashion. This is in anticipation of a live concert album with the Nu Deco Ensemble that is called “Paint the Roses.” I am very much looking forward to the release of this work. The single, Sometimes, is almost like a clapped field holler backed by a symphonic counterpoint from Nu Deco Ensemble. This is where the best music intertwines to stunning effect.

It was a pleasure writing about Donna Herula and Larkin Poe as they are embracers of traditional forms which honor the forebears. But at the same time, they are articulating their own lives and passions in unique and exciting ways. The musics of these artists inspires me as a fan and as a musician. Never, in the history of recorded music, have women been more in control in the presentation of their music both in the performance and in the presentation of their work. With artists like Donna Herula and Larkin Poe, the future of women in Blues and Roots music has never been stronger. Their music gives me faith in the continuation of the best aspects of recorded and performed music.

For more information about these artists, consult the following websites: donnaHerula.com and larkinpoe.com