But what’s the use of leaving Afghanistan if we’re going to bring it with us to America?

The “interpreter” scam is one of the longest running immigration hoaxes on record.

And there are 20,000 Afghan “interpreters” applying for SIVs or Special Immigrant Visas.

It’s not as if we haven’t been handing out SIV visas like candy already. 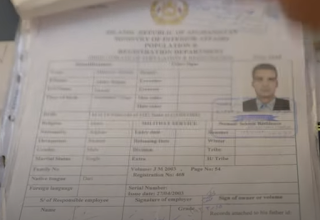 With 20,000 principal Afghanistan applicants, that means we could easily be looking at over 60,000 total Afghan immigrants in the short term. And the numbers may go as high as 100,000.

The long term numbers under family reunification programs would be absolutely staggering.

And the 20,000 number is still not the full total of principals. Just the ones in the system now. With a current deadline for applicants set to expire in December of next year, there’s plenty of time for more applicants to hop on the gravy train. And as Afghanistan collapses, there will be less scrutiny possible of the applicants, some of whom will already be waiting as refugees.

What’s the cost of all this to Americans?

The “interpreters” function more like refugees and “are eligible for the same resettlement assistance and federal public benefits as refugees”. In the past, 85% of SIV migrants, in partial numbers at least 60,000, received refugee aid and were resettled across the country.

By 2017, SIVs made up a quarter of migrants receiving refugee resettlement assistance.

Even those SIV migrants who were employed could still be living off American taxpayers with a GAO report noting that, “of those SIV households receiving earnings from employment, 89

percent were also receiving income through Refugee Cash Assistance, Matching Grant, or TANF programs, which is slightly higher than the rate of the overall refugee population.”

Aside from the financial expense of bringing tens of thousands of migrants from a failed state to America, there’s the terrorism and criminal risks.

The media keeps claiming that all of the applicants have been screened and aren’t a threat.

Even a pro-SIV report noted, “As of 2019, the State Department only had one analyst conducting security checks for the backlog of over 18,000 applications.”

Immigration authorities ask an American “co-signer” to “certify that, to the best of his or her knowledge, you present no threat to the national security or safety of the United States” even if the co-signer only has a relationship with the Afghan’s “contract or sub-contract supervisor.”

With that sort of screening, it’s no wonder that some SIVs who have come to the United States have carried out violent attacks and allegedly became involved with Islamic terrorism.

Last month, the Biden administration demanded 8,000 more SIV visas. While the Democrats can’t directly bring all the applicants immediately here, they intend to move them to third countries from where they’ll be able to continue applying to enter the United States.

More radical voices however want to fly as many Afghans as possible to America right now.

Some media outlets, including the New York Times, are reporting potential numbers as high as 100,000 Afghans. That would mean evacuating some 2% of the population of Kabul here.

Such an invasion would have catastrophic consequences for Americans.

The United States has already handed out 100,000 SIVs to Afghans and Iraqis. We’re now looking at the possibility of another 100,000 with no real end in sight even after that.

Americans will have resettled an entire Tallahassee or Chattanooga worth of “interpreters”.

Senator Mark Warner and Senator Marco Rubio have claimed that failing to bring the Afghans to America would be “a stain on our national conscience”. The real stain on our conscience is politicians who put Americans last and put open borders migration first. Americans have spent countless blood and treasure fighting for the Afghans. But the Afghans won’t fight for themselves. As American forces leave, they’re deserting, surrendering, and retreating.

Over 2,000 Americans died for Afghanistan. No more Americans should die at home.

The move to bring 100,000 Afghans to this country is a warning that it’s much easier to get Americans out of Afghanistan than it is to get Afghanistan out of America.