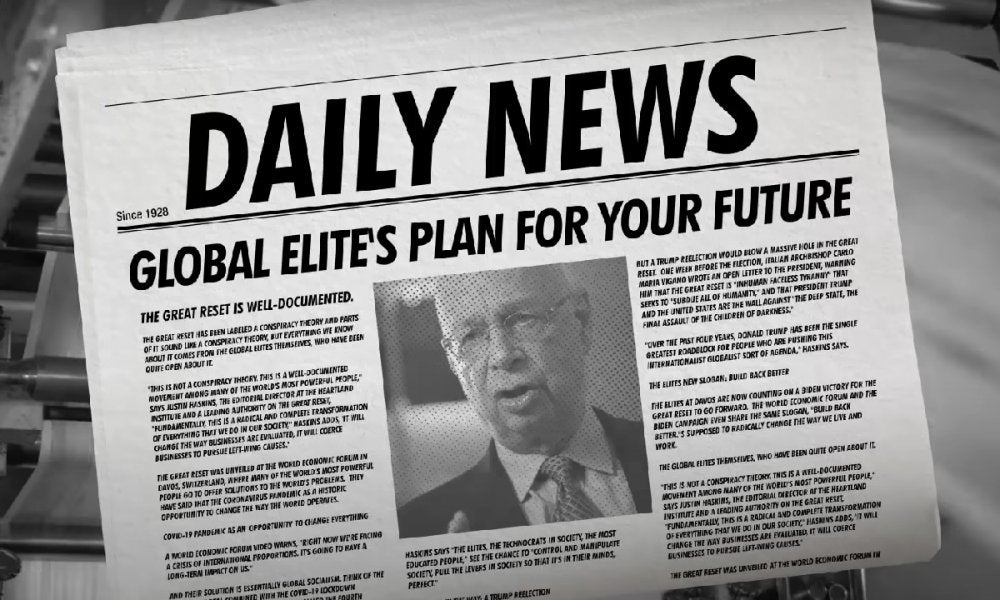 The post-pandemic era is a great point to take pivots, try out new methods of recovery, and experiment. The faults in our economy have been exposed when everything came to a standstill and our way of life has been changed permanently. This is the chance to reflect and take stock and audit our way of life. Do we decide that we should make it better and adapt keeping all possibilities of a halt in mind or does America decide that we are not complying with the corruption and decay introduced by the rot from the global and national political swamp?

This story is really not about the plan-demic or the American people and our economic recovery. It’s more about the great reset movement with the global economy – the act of one exclusive body controlling all nations globally under their one world government of the few privileged elites. There is a serious and a deliberate attempt to produce structural changes in the organization of global capitalism, the initiative necessary has many factors including the furtherance of this plan-demic and its devastating effects on a global society, the unfolding technological revolution, and the consequences of their narrative to climate change.

Consequently, as a result of our lack of attention during the pandemic we have been bamboozled by the deep state political operatives. The deception from the World Economic Forum (WEF) and the World Health Organization (WHO) has shifted American values of individualism, freedom, self- reliance, equality, opportunity and hard work which have given us abundant wealth and healthcare  we as Americans value. We fell asleep for  just a moment, and they managed to bring us to the precipace  of the greatest scheme ever to be launched by the biggest  global network of billionaires with a blueprint called #TheGreatReset.

Professor Klaus Schwab, Founder and Executive Chairman of the World Economic Forum, has been at the center of global affairs for over four decades. They have positioned the WEF in an emerging system of “discretionary governance,” in which these unrestricted political players are shrewdly positioning themselves in “Shall We Play a Game” like chess pieces on a board strategizing  how to entice the global influencers and top leaders in order to garner significant sway over the people. A powerful, “exclusive brain trust, the WEF with no formal mandate to implement its strategic positions that they have hinted to by re-imagining our world-wide, all -encompassing grand plan.” However, money and power is the controlling factor that is the inducement for bad actors to do bad things #Agenda2030.

It is perhaps with this grand intent and overly enthusiastic sensationalism that the WEF funded by private and governmental donors, with investments from the governments of Germany, Japan and Norway, and the Bill & Melinda Gates Foundation with support from the British Royal Family – Prince Charles, George Soros and of course Al Gore. These globalists came forth with the idea of a Great Reset of Capitalism,  the campaign which has been heavily dependent on  donors influenced by the Rockefellers,  and the powerful political Clintons, Obama’s, and Bush’s who have taken up the cause. The WEF was not the first to moot this – there were some isolated thoughts thrown about into the political discourse years ago. It is, at the same time, rather bewildering to note that the Great Reset received very little formal or informal endorsement from economists – But because everyone is keen on looking at all routes for recovery, this Great Reset is both the latest attempt by “globalists” and “the ultimate final battle” that is openly dictatorial and characterized by the suppression of political tyranists and the murder of free speech, of course, with the hyperbolic of the MSM.

Klaus Schwab (Schwabism) he has gained a significant space in economic discussions, especially with the likes of billionaire George Soros and his projects to battle the erosion of civil society in a world increasingly ruled by “would-be dictators.” They needed this plan-demic to renew interest to their nefarious power grab along with the Schwab Foundation to have full control of America .

Every country, from the United States to China, must participate, and every industry, from oil and gas to technology, must be transformed. Yes, the Great Reset is a challenging – and extremely dangerous theory, it is not a sustainable recovery or a green solution as it is marketed by these elites. There is no clear roadmap either with specific plans that can be rolled out immediately to the masses, the taxpayers who will be satisfying the “One World Order ” appetite – is secretly emerging into a totalitarian world government. Remember that the masses will be heavily taxed, healthcare and food will be rationed, it is as if the pandemic has turned into a competition for global leadership, and it will be the countries that most effectively respond to the crisis that will maintain their global leadership. May I remind you who is in the White House – a bungling idiot?

The “TRUTH” behind the “Great Reset” is being told by the Digital warriors and the conspiracy theorists that have a powerful viral rallying cry run by powerful patriots – this secret faction is broadcasting the plan around the world. It is time to #WAKEUP

In fact, the 2030 prediction describes a world where, “You’ll own nothing and you’ll be happy and that everyone will rent everything they need.  Klaus Schwab founder of the World Economic Forum (WEF). “The demands for the WEF to reform are as old as capitalism itself; we also know that the dominant capital tends to resist change. What is different this time is the vocal support for the principles of stakeholder capitalism from the global industry. In the US, progressives want Joe Biden’s, “ #BuildBackBetter ” which is a slogan from one of the Rockefeller’s Foundations, and the Build Back Better plan that comes straight from the Great Reset’s playbook”.

Itamar Marcus: The Indoctrinating World of the Palestinian Child

Michael Ingmire: The Mask of the Branch Covidian