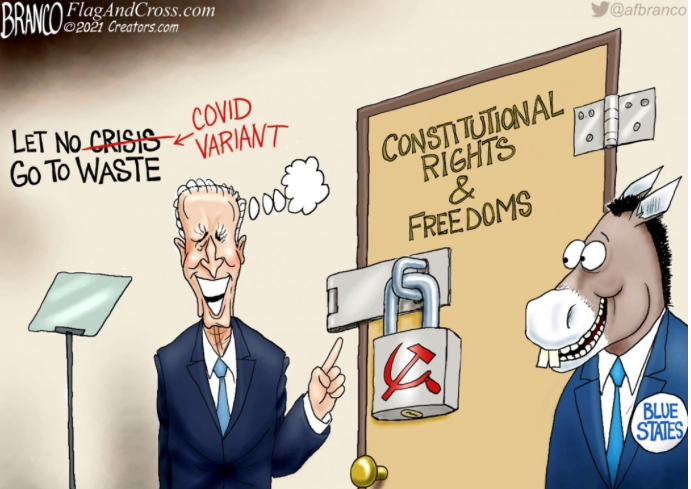 We need to be aware, and we need to be vigilant. Perhaps it is time to go beyond the wisdom of our basic experience. Perhaps we should broaden our frame of reference. The process of reading, researching and discussing information is not illegal…yet.

In analysis, the United States Government fully realizes that their only power is in their ability to divide us as citizens. A unified populace is frightening to our current incompetent system of government. The fear of this unification of the American people is the real reason why razor wire was placed around the Biden White House.

The division instituted by the Biden Administration is merely a diversion, a distraction created by the distracted. To paraphrase a lyric from “Slow Train Coming,” a Bob Dylan song, there is an illusion in Joe’s vision and he has always followed his own ambition.

The Biden administration would have you believe that our citizens are divided into two narrow categories. They are narrowing the two categories into two adversarial titles that I term as follows: The Patriots versus The Branch Covidians.

Branch Covidian is my turn of phrase on the name of the Branch Davidians, a religious cult established in 1955 by Benjamin Roden. They saw themselves as a continuation of the General Association of Davidian Seventh-Day Adventists, as originally established, in 1935, by Victor Houteff. Houteff disavowed Roden and his followers.

Most students of modern history remember David Koresh, who became the leader of the Roden originated Branch Davidians in 1987. Historians also remember the tragic ATF siege on their compound in Waco, Texas in April 1993, a siege that killed Koresh and many other Davidians.

I sardonically use the term Branch Covidian to emphasize what is an alarming and tragic issue in American society within the COVID pandemic. In my lifetime, I can never remember America being so resoundingly manipulated by our government. What the government deems as public health safety is an exercise in public control with many of our citizens like the Davidians: naïve, delusional and compliant.

If someone wants to wear a face covering or publicly state their health records everywhere they go for the rest of their lives, well that is their own business. Just as it is my own business to refuse to comply. What is even more concerning are the active divisions created between our citizens by our government.

If we are divided, the Biden Administration hopes that we will ignore the abjectly stupid and perpetual hypocrisy of their alleged ‘healthcare’ policies. They hope that, as citizens, we will miss the fact that Biden and Harris have abdicated their responsibility to secure our borders. The focal point of our immigration conversation has been the hundreds of immigrants pouring over our Southern border.

Part of what is missing from the conversation is the lack of medical vetting for the incoming illegal immigrants, which is perhaps the reason for the uptick in cases?

What is also missing from the conversation is the fact that our Northern border is an unsecured open door–a door that is waiting for terrorists to walk through. President Trump did not appropriately address the Northern border question nor has it been by the country of Canada.

I will make a direct statement here: It is time to demand, as citizens, for an impeachment of Joe Biden and Kamala Harris. I believe they have violated their Constitutional oaths on more than one occasion. We could talk about the vote, but the powers that be continue to ignore evidence.

What is even more directly concerning, and a consideration in impeachment proceedings, is the dismal failure of Joe’s Southern border policy. We had an almost totally secured border under Trump, yet Trump gets blamed for Joe’s direct failures. That is laughable and tragic, like Biden’s attempt to navigate a coherent sentence. Harris was assigned to handle the Southern border situation, where she has yet to visit. Like Where’s Waldo, Where’s Harris?

Additionally, Biden and Harris need to be impeached for our failed withdrawal from Afghanistan. Yet again, President Trump is being blamed for Joe and Kamala’s lack of a clue and the articulation of a real exit plan for our Troops, Advisors and American citizens in Afghanistan.

The responsibility for the recent deaths in Afghanistan lies firmly on Joe’s slippery doorstep. Their blood is on his hands. He had no organized plan and now the Taliban are a stronger terrorist organization. Using a variation of my previous statement, Joe Biden is the masked and hapless master of the Branch Covidians.

So America, let us heal our divisions. Truth is not a virus. There is a definite need for courage and faith when addressing tyranny. The cure for our current administrative crisis is a unification of our people. Our freedom is at stake.