“But something is happening here
But ya’ don’t know what it is
Do you, Mister Jones?”
-Ballad of a Thin Man, Bob Dylan

Do you remember when we were told to give them 15 days to slow the spread? There was very little known about this biological warfare attack. We were not told about the government funding of the military lab in communist China and biological warfare experiments taking place in this lab. There was no discussion about our own government funding the experiments in the military lab in the Wuhan province of communist China. We were not allowed to question any of the propaganda videos coming out of communist China about this manifested pandemic.

We have gone from “15 days to slow the spread full circle” to shutting down America and shaming people into getting an experimental pathogen injection. The people’s willingness to comply with all the mandates has been disheartening. Without any data to back up the mask or vaccine mandates many people are blindly complying. People that question where the data is that backs up any of these mandates are mocked and silenced.

People are expected to accept everything the government agencies say without any questions. Any opposing views from other health care professionals is silenced. There is no discussion about any of the effective therapeutic cures. We don’t get easy-to-read charts that show the mortality rate for healthy adults and children. The government agents talk about the number of positive cases, but not the number of deaths. They intentionally put out confusing information about the effectiveness of masks and these emergency vaccines. Get the vaccine and you have to wear a mask. No wait, that’s no longer valid. Now the government agents say everyone must mask up regardless of vaccine status. There is no discussion about how many people have died after getting the experimental pathogen injections. We are not allowed to question anything about the safety of these emergency vaccines.

People are expected to blindly comply and if you don’t then the media clowns mock you and claim you are killing people. Circling back to when this pandemic was manifested we have come full circle to Marxist Democrats shutting down America, stealing an election, vaccine passports and the clown media demanding that everyone that questions any of these mandates be silenced and ridiculed.

The ruling class realizes that if people knew the truth about the low mortality rate among healthy people it would be much harder to convince many to line up for a experimental pathogen injection that has the potential to cause serious health issues. Or kill them.

Why are they pushing this emergency vaccine? Wasn’t it supposed to be used in an emergency basis and administered to the people that are the most vulnerable and likely to have serious complications from this lab-created China virus? 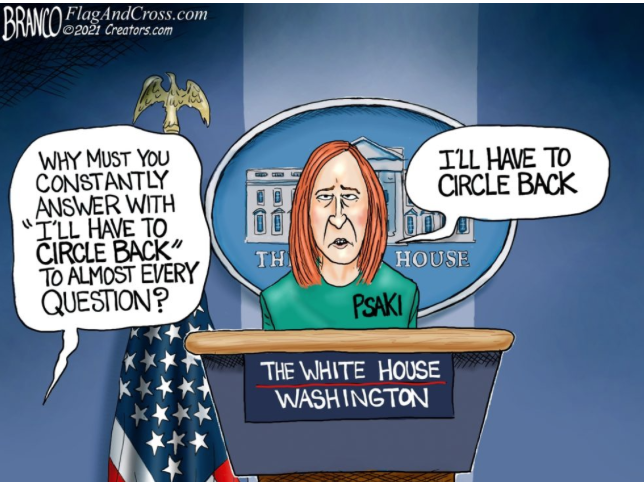 As thinking, intelligent Americans, let us actually “circle back” to the principle of common sense. Some people have book smarts but not any common sense. I learned from my Mother to never confuse intelligence with education. My Mother always emphasized that common sense was nothing taught in school. By my Mother’s standards, we should use critical thinking and common sense in our decision making process. Especially when our health and freedoms are at stake.

Every time we hear the jumbled muttering from the current administration we know without a doubt that common sense is a foreign concept in the hands of the big guy. For the occupiers of the White House and their Marxist minions, common sense is an arcane principle best forgotten.

The Biden administration has not been serving our America as a whole. He serves at the behest of the extreme left, such as the infamous Squad of Congress. The real history of Joe Biden, as a public servant, is flimsy and mediocre. Ultimately, Joe has always served his own needs and the needs of his family. But the American people are served last, if at all, by Joe’s questionable public service record. What product did the Biden family peddle to get so rich?

Face it, Joe Biden’s policies have no practical common sense attached to them. They lack logic and intelligent forethought. In their planning and execution they have as much cognitive clarity as Joe’s recent Town Hall appearance. Barack Obama declared a “fundamental transformation of America.”  Biden in turn, with the help and direction of his various handlers, is all about the fundamental destruction of America. Our obedience to a lawless government is wearing thin, as it should, and our civil disobedience is appropriately growing.

Considering the limited success of the Biden Administration, it is time for American Patriots to circle back and demand accountability from a criminally faux administration.

Shall we circle back to campaign promises broken? Like the closing of the Keystone pipeline when Joe advised, on the campaign trail, he would not close it? Joe may have set a presidential record by losing 48,000 jobs in his first day of office.

Biden’s first actions were to stop building the wall and open up our Southern border. How does this makes any sense during a pandemic? Now we have thousands of immigrants pouring over our Southern border states. Why is the CDC silent about not vetting people illegally entering our country?  What contagious diseases and deadly viruses are the people invading spreading? Biden has put the VP in charge of stopping this invasion. Harris has shown that she is totally out of her depth in the execution of any substantive policy.

The Biden/Harris immigration policies embolden the drug and human trafficking cartels, allow terrorists and criminals entry into America and put every American citizen at risk. He is not fulfilling his Oath of Office to maintain law and order and defend America. His open border policies put all American citizens in danger by doing nothing to stop the spread of COVID and hard drugs flooding communities. They are encouraging people to illegally enter our country and these criminals and gang members are being  bused into communities across America.

Joe Biden has illustrated that he is too addled and far too mean spirited to protect and defend the Constitution of the United States. Especially in consideration of his current nominations and cabinet. When we circle back to Joe’s intellectual coffers, we need to seriously consider the true danger we are in with not only his domestic immigration policies but also his foreign policies that is a rehashed version of the Obama failed foreign policies of appeasement and bribery.

When we have Patriots, like Cuban dissidents, attempting to flee oppression, the Biden administration turns them away. Similar to how Obama turned his back on the courageous Iranian people that were in the streets protesting against tyranny in Iran when he first took office. As always, Joe and the Marxist Democrats are on the wrong side of any noble issue.

Both President Trump and Biden pushed the various COVID vaccines through without the appropriate clinical trials. Therefore, I refuse to willingly have an untested pathogen injected into my body. Joe is stating he may have representatives of his administration go door-to-door to convince our populous to be vaccinated. This abuse of power by the Biden administration is staggering.

The last 18 months have been tyranny masked as the science of public protection. Make no mistake, this is an exercise in public control. The government “health experts” claiming they “follow the science” is not backed up by any verifiable facts. I have no faith in the veracity of the CDC. It no longer operates as a true scientific agency. I refuse to give credence to the ramblings of Dr. Fauci, a walking contradiction that lied before Congress about his involvement in funding the experiments in the military lab where this virus was created.

I still believe in and live by the following principle: It is better to be a reluctant Shepherd than a compliant sheep. Government is not Science and Science must not be mistaken for Government.

President Trump exposed the corruption in both political parties, our justice department, intelligence agencies and the clown media. The Democrat Party is the party of fear and division. Unfortunately most Republicans remain silent and follow along like the wimps that they are. Joe Biden is a walking advertisement for the 25th Amendment. He is unfit for office.

We the people need to remove ourselves from the manipulation of both the media and the government. Time to start standing up to the beast. Face to face, foe to foe, unmasked. The mandates and tyranny will only end when the people refuse to comply. It is up to you to determine what your new normal will be.

Greenfield: It Doesn't Take Censorship to Fight a Pandemic