Praise the lord, who is my rock.
He trains my hands for war
and gives my fingers skill for battle.
Psalms 144:1

The people that move my soul are those with substance in their character. As a man of faith, I am drawn to people that reflect a Christian Patriot presence. Individuals that have survived trouble and loss, with their dignity intact and love of our country, inspire me. Since the death of our nephew Sean Smith, in Benghazi, my wife and I have been honored by our interactions with Gold Star families.

My own activism of seeking accountability regarding Benghazi has also opened the door of friendship with such great folks as Benghazi parents Pat Smith and Charles Woods. Pat and Charles have become close  friends and comrades. We share similar forms of grief and anger. We remain united in our search for accountability.

Around the first anniversary of the Benghazi attacks, I became acquainted with two sterling Christian Patriots, namely Karen and Billy Vaughn. We connected not long after I made a September 11, 2013 appearance on Fox and Friends.

Karen and Billy are fine people. They are warm and real, operating with quiet faith and a broad sense of humor. I admire the determination that they demonstrate in the navigation of their lives. Their son, Aaron, was a member of Seal Team Six.  On August 6, 2011, Aaron was killed along with 22 other Seals and 15 other service personnel when the chinook helicopter they were traveling in was shot down, by Taliban forces, over Afghanistan. Much more on that later. 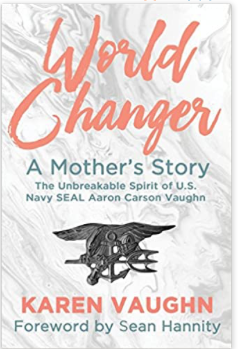 In 2017, Karen Vaughn’s book about the story of her family was published. It is titled, “World Changer A Mother’s Story, The Unbreakable Spirit of U.S Navy Seal Aaron Carson Vaughn.” (Freedom Press, 2017)

The story behind this book is an inspiring American tale of a true Christian Patriot family. I found myself immediately captivated by the conversational style of Karen’s writing and the hard earned wisdom that created this work. I have read and reread this book several times now. The lessons and hard earned wisdom ring from the pages of Karen’s story. The advice that she bestows on the reader is invaluable.

The book opens with a strong foreword from Sean Hannity and a great introduction from Tracy Bowen. The main body of the book is divided into three parts, each composed of the several chapters. Part One is entitled, “The Forging.”

The Forging section opens in 1980, the year that John Lennon was assassinated and Ronald Reagan was elected, the year that Billy and Karen Vaughn met. They grew up in adjoining towns in Northwest Tennessee, Karen in Union City, Billy in Troy. They became inseparable and Karen transferred to a college closer to their home area. Like many young lovers, they unexpectedly became young parents.

Both Karen and Billy stepped up to the plate of responsibility.  They were both raised by good and moral parents. Without any doubt, Aaron Carson Vaughn was born to two very loving parents on June 24, 1981. He was the first grandchild in their family and was raised with a lot of unconditional love by his parents and his grandparents. As Karen describes in Her book, and in our correspondence, Aaron was a good baby and slept consistently through the night. Despite being spoiled by both sets of his grandparents, Aaron was raised to respect authority and was raised as a child of God. He demonstrated his faith in many acts of kindness throughout his life.

Billy nurtured Aaron to be self-reliant and resilient combined with a big heart. Part of the first section details the families time on a 47 acre farm in Tennessee. These are some of my favorite stories in a book full of potential favorite stories for any reader.

I love the story of Aaron bringing a tiny potbelly pig to school as an unusual show and tell item. The story of Aaron helping to pull down a tree with a four wheel drive ATV vehicle at the age of eight. The story of a tiny Aaron standing up to a large bovine, named White Cow, is worth the price of the book. (Some of these stories, including the potbelly pig one, are referenced with stunning pictures. The pictures and the layout of the book effectively illustrate Karen’s story.) Billy included Aaron in adult activities that taught him courage, responsibility and self reliance. As Karen wrote in her book, “The forging had begun.”

After an explanation of how tough the Navy Seals were, as described to him by Billy, Aaron started telling anyone that would listen that “one day he would be a Navy Seal.”  He came to this decision at the age of eight.

The book details the closeness of a remarkable family. Karen details the warmth between Aaron and his siblings, Tara and Ana. Faith in God is the backdrop of this story. By the time he was in High School, Aaron had decided to apply for Seal training. When he suffered a serious ACL injury playing High School Sports. It looked like his career as a Navy Seal might come to a premature end.

Yet, because of the determination he learned from his parents, Aaron put himself through a rigorous training schedule to overcome his injuries.  Karen helped him to train. In the aftermath of September 11, 2001, Aaron entered Seal Qualification Training.  This was after his 21st birthday on June 24, 2002. Despite a bad knee, Aaron completed the extensive training program with flying colors.

Fast forward to 2011, the story of World Changer continues with detailed family stories, of marriages, of the birth of grandchildren and the closeness of a true American family. On May 3, 2011, Joe Biden made the following statement at the Atlantic Council Awards Dinner. This dinner that was held after the May 2nd death of Osama bin Laden:

“And I am flattered to be asked and come and help celebrate the 50th anniversary of the Atlantic Council.

Ahh let me briefly acknowledge tonight’s distinguished honorees. Admiral Jim Stavridis is a, is a, the real deal. He can tell you more about and understands the incredible, phenomenal, just almost unbelievable capacity of his Navy Seals and what they did last Sunday.”

“Folks I’d be remiss also if I didn’t say an extra word about the incredible events, the extraordinary events of this past Sunday. As the Vice President of the United States, as an American, I was in absolute awe, awe, of the capacity and dedication of the entire team. Both the Intelligence Community, the CIA, the SEALS, it was just extraordinary.”

What is extraordinary to me was that Biden would ever be considered a “Commander-In-Chief” after this almost treasonous form of loose lips? Biden further articulated that he was amazed that not a single bit of information was leaked. Why worry about leaks, when you have loose lips Joe?

As a President or Vice President, you never release information about Covert Operatives. It should never, ever, be done. Even Barack Obama only stated that “trained service personnel” were responsible for the completion of the Osama bin Laden mission. Joe was loose in the lips, with cash in his hips, as Senator and Vice President. Why should we ever expect anything different from him as President? I would not want to be a soldier or covert operative in a Biden Administration.

In preparation for this article, I sent Karen Vaughn nine questions by email.  She graciously answered them all. For the eighth question, I asked the following two part question:

“In the wake of the Osama bin Laden raid, did Aaron feel that he and his fellow Seals were outed by the media? We know that Biden’s statements, from his May 3, 2011 Atlantic Council Awards speech, were very generalized, yet they have grown into an almost Urban legend. Do you have resentment towards the Obama Administration in regards to Aaron’s death?

I quote Karen exactly as follows:

“Absolutely and absolutely. He was SHOCKED by Biden’s words. The whole community was. He was frightened for me and for his wife and kids. He felt that a target had been put on our backs. He was livid.”

I don’t blame Aaron for being livid, nor his family. I rewatched the May 2011 Biden Speech and became livid again. I have referenced a link to the speech below. Judge for yourself. Karen reports on the Obama Administration far more graciously than I could in World Changer.

The second section of the book, “The Warrior,” has a set of chapters about Aaron and his training to be a member of Seal Team Six.  Heartbreakingly, it also describes the details about Aaron’s death.  On August 6, 2011, a U.S CH-47D Chinook Military helicopter, with the call sign Extortion 17 (called 1-7) was shot down by a rocket propelled grenade. This occurred in the Tangi Valley,Maidan Wardak Province, Afghanistan. Lost in this act of terrorism were Aaron and 22 other Seal Team Six members, brothers all, and 15 other service personnel. They were shot down by the Taliban–with a map drawn by Joe.

The heartbreak exudes from her book as Karen describes Aaron’s death. Yet, reading her words, we understand that she and Billy raised and nurtured an American Warrior, a great son, husband and American Patriot. A World Changer. Part Three speaks of Aaron’s legacy. Karen and Billy are eloquent spokespeople for our defenders. They honor Aaron everyday with their efforts. Karen Vaughn also offers a common sense study guide for parents as the closing section of the book. Eloquent and wise words for all parents.

No matter your spiritual, political or historical perspective, “World Changer A Mother’s Story,” should be read by all. I cherish my signed copy of her book. Psalms 144.1 is referenced within her signature and personal note to me.  Available at all major book outlets and specifically at officialkarenvaughn.com