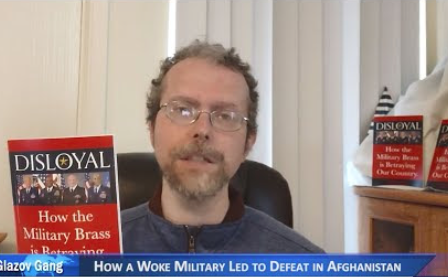 “I want to understand white rage, and I’m white,” Gen. Mark Milley, the chairman of the Joint Chiefs of Staff, whined at a congressional hearing.

He might have done better to understand Muslim rage.

A week after his testimony, the Taliban had not only doubled their number of districts, but possessed hundreds of captured U.S. armored vehicles, along with artillery and drones.

The Pentagon’s spokesman told reporters to ask the Afghan military about the gear.

In May, Milley had shrugged off questions about whether the Afghan military would survive. “We frankly don’t know yet. We have to wait and see how things develop over the summer.”

The Afghan military was beginning to fall apart while Milley was defending critical race theory.

A week earlier, the New York Times had described “demoralized” Afghan forces “abandoning checkpoints and bases en masse.” Two days after Milley’s disgraceful performance, the media reported that even the Taliban were “surprised” at how fast they were advancing.

At the beginning of July, the Biden administration abandoned Bagram Air Force Base. A week later the Taliban reclaimed the Panjwayi District where the Jihadist movement had gotten its start, seized the largest border crossing with Iran and the millions in revenue that came with it.

While the Taliban were conquering Afghanistan’s rural provinces and then moving on to besieging its cities, the Army was wrestling with the “effective messaging that demonstrates why DEI efforts are critical to the success of the Army”. The new messaging would explain how the “talents of a diverse workforce” that included “language, race, color, disability, ethnicity, gender, age, religion, sexual orientation, and gender identity” were vital to whatever its mission was.

The Taliban, who were mostly Sunni Islamist Pashtun tribesmen, would spend the next two months demonstrating that diversity was not a strength, but a serious weakness.

While the Afghan government and its military were divided between diverse tribal factions, some of whom would flee to Iran and others to Uzbekistan (depending on whether they were Hazaras or Uzbeks) while the Pashtuns would surrender to their fellow Taliban tribesmen, the Taliban showed that unity would stomp diversity in the face and then dance on its grave.

Meanwhile the military brass in this country, as discussed in my recent pamphlet, Disloyal: How the Military Brass is Betraying Our Country, was busy dividing our own military from within in pursuit of diversity, pitting black and white service members against each other in “critical conversations” and urging them to accuse their country and services of “systemic racism”.

As the Army brass were striving to establish the “Army as a global leader in DEI”, America’s enemies were plotting to become global leaders in land, power, and military victories.

By late July, Milley admitted that, “Strategic momentum appears to be sort of with the Taliban.”

By “sort of”, Milley meant that the Taliban had more than doubled their territory again and were marching on half of the provincial capitals.

Few reporters asked follow-up questions about the “sort of” because the leading story in D.C. was an anti-Trump book which flatteringly portrayed Milley as preventing a Trump “coup”.

No one, from the media to Milley, cared about the actual coup underway in Afghanistan.

While Biden’s brass were pledging allegiance to diversity, Chinese Foreign Minister Wang Yi welcomed Taliban leader Mullah Abdul Ghani Baradar to the People’s Republic of China. Yi praised the Taliban as a “a pivotal military and political force” and mocked the United States.

The United States Army was busy “developing and implementing a strategic plan to advance DEI across the Total Force” as the Taliban seized the capitals of Helmand and Herat.

But the Navy faced its own crisis when Chief of Naval Personnel Vice Adm. John Nowell Jr. warned at a DEI panel at the Sea Air Space conference that removing photos from promotion boards, a diversity measure from last year, actually undermined diversity because the brass no longer knew exactly how many minorities they were artificially promoting to fit diversity quotas.

While the Navy was grappling with this dark night of the soul, Staff Sgt. Nicholas Jones with the 2nd Marine Raider Battalion received the Navy Cross for his heroism during a six-hour battle with ISIS last year during which he rescued a French ally and risked his life to try and rescue two wounded comrades.

Sadly, Jones is a straight white man from Kansas, and doesn’t really fit the DEI template, but in happier diversity defense news, the new Navy Secretary is an immigrant, the first female sailor graduated from Naval Special Warfare training, and the Naval Institute published a confession by Lieutenant Commander David Elsenbeck that he was “unconsciously biased” and a “member of the dominant group in a society suffering from institutionalized and historically ingrained bias”.

American POWs used to be starved, beaten, and had bamboo shoots driven under their fingernails without repeating the Marxist dogma they were being indoctrinated with. But hardly a week goes by now without another litany of Marxist confessions at military struggle sessions.

The Taliban, who actually are a member of the dominant group, began swallowing up a series of provincial capitals and marrying off young girls to their Jihadists. Back home, the Virginia Military Institute’s first-ever Chief Diversity Officer, Jamica Love, announced that she intended to pursue “institutional change” to transform the VMI’s culture. That’s what the Taliban were also up to.

While the Taliban advanced, CIA Director William Burns commented that increasing “diversity and inclusion” was among his top priorities. “We cannot be effective around the world if everybody looks like me,” he complained. To that end the CIA had unrolled an ad campaign featuring a Latina cisgender intersectional worker wearing a pink gender power clenched fist t-shirt. But the widely hated woke ad was only the tip of the agency’s diversity iceberg.

“At CIA, we don’t just leverage diversity, equity, and inclusion; we embrace and celebrate it,” an agency diversity report insisted. “This ethos must be woven in to our day-to-day tasks.”

How were diversity and equity woven into the task of monitoring the Taliban’s advance?

No one knows. But, like the military, the CIA went on holding “critical conversations” in which minority employees were encouraged to spout racism accusations.

Sonya Holt, Deputy Associate Director of CIA for Talent for Diversity and Inclusion, who had started out as a mere recruiter, assured that through DEI, “the Agency will be better prepared to address intelligence challenges and support its customers.”

While CIA officers were learning “how diversity, equity, and inclusion are essential to mission success”, the agency began belatedly considering how to extract its assets from Afghanistan.

Recent intelligence reports “warned that Kabul could fall to the Taliban within years”.

But while the CIA tried to figure out how it would collect intelligence on the Taliban after the withdrawal, its employees did have the benefit of 15 affinity groups including ANGLE (Agency Network of Gay, Lesbian, Bisexual and Transgender Officers and Allies), DAC (Deaf Advisory Council) and SALAAM (South Asian Leadership and Advisory Membership.)

The CIA was also working to hire “neurodiverse” personnel, which it defined as people suffering from ADD, Dyslexia, or Tourette’s Syndrome. Or as the CIA ‘wokely’ put it “differences labeled with” these syndromes.

Key Afghan figures had warned that there was a conspiracy underway to hand Afghanistan to the Taliban. The drumroll surrenders of cities and much of the Afghan military appeared to confirm that backroom deals had been made. The obvious players able to pull off such deals were Pakistan’s ISI spy agency, the original backers of the Taliban, along with Turkey and Qatar.

Biden’s CIA director had turned to Pakistan in the hopes of allowing the agency to run a spy base in the country that had harbored Osama bin Laden. The Biden administration’s military and diplomatic response to the Taliban was being run out of Qatar. And it had handed security at Kabul Airport over to Turkey before frantically taking it back when the Taliban took the city.

The CIA should have been on top of this, but it had better things to do with its time.

An unclassified intelligence community report did warn that the Taliban was “broadly consistent in its restrictive approach to women’s rights.”

The Taliban have now taken over Afghanistan, but it’s not all bad news on the military front

.”While Trump administration Pentagon nominees were overwhelmingly white and male, the Biden administration says 54% of its national security nominees ― to the Pentagon, State Department and U.S. Agency for International Development ― are women, 40% are people of color, and at least 7% identify as LGBTQ,” the publication thrillingly reports.

Better yet, “recent weeks saw two LGBTQ women confirmed to top military positions. Air Force Undersecretary Gina Ortiz Jones is the first out lesbian to serve as undersecretary of a military branch, while Shawn Skelly, the assistant secretary of defense for readiness, is the first out transgender person in the job and highest-ranking out transgender defense official in U.S. history.”

The State Department is doing its part by asking the Taliban to form an “inclusive and representative government.” And if they refuse to have as many neurodiverse black transgender defense officials as us, Biden won’t give them any more humvees, artillery, choppers, or drones.

The Taliban may have won Afghanistan, but we’re winning the diversity race. And since diversity is more important than winning wars or being a military superpower, we’re beating the Taliban. Not to mention Russia, China, and Iran in the field of transgender defense officials.

As I warned in the David Horowitz Freedom Center’s booklet, Disloyal: How the Military Brass is Betraying Our Country, wokeness is leading our military to disaster, disgrace, and defeat.

Diversity, Inclusion, and Equity, (sorry, Diversity, Equity, and Inclusion) is at “the heart of everything” that Biden’s military does and our performance reflects the focus on DEI.

Afghanistan is a disaster, but we’ll have the most diverse military in the world or DEI trying.